This will be cross-posted at commongunsense.wordpress.com.

I know that my views on the subject of guns and gun violence do not mesh much at all with the gun rights extremists or those who believe in the fear created by the corporate gun lobby. Yes, of course, many people own guns for self defense and for hunting and enjoy them for sport. It becomes a family affair to go hunting every year and my family also did that. I grew up around hunting and hunting guns. I didn't grow up around fear and paranoia or in a neighborhood where a lot of crime happened. No one in my house talked about needing a gun for self defense. But the violence that comes when some who own guns for self defense in their homes use them for murder has affected my family. I do know that fear. I know the fear of losing someone close to me because of someone who feared others. I know the pain of a phone call telling me that my only sister had been shot to death by her estranged husband, someone who loved his guns.

It's a culture in America- the gun culture- not seen in any other country in the civilized world. People love guns. They love their power. They love their accuracy when they shoot at targets. They love the protection that they believe guns can provide. They love using them to hunt and some love to collect guns. I know many of these people. But I don't know very many gun owners who ascribe to the corporate gun lobby's mantra about guns everywhere and for everyone and anyone. The gun owners I know support gun safety reform.

An author, Susan Straight, wrote this piece about her husband's love of guns and what that did to her family. I like this piece because it expresses the differing views about guns that exist all around us. We seem to live in two different worlds and can't agree on what we should be doing to keep our communities safe from gun violence. One side, represented by a minority, believe that guns everywhere are safe and there should be no restrictions or, apparently no common sense when it comes to lethal weapons. The other, the majority of us, believe that gun rights and gun safety reform are not mutually exclusive and that we can save lives with reasonable reforms. We also believe that having tough conversations about the risks of guns in homes has to happen. One example, that could have been helpful to the writer of the article above, is to ASK if there are guns in the homes where your children play and hang out. I wonder how Straight's husband would have reacted had that question been asked of him? Would he have stored those guns more safely away from his own kids and their friends? Maybe. It's luck that his daughters didn't handle the many guns in their home.

From the above linked article:


We had three children, and suddenly he had 10 guns. I didn’t feel protected. I felt like I was living with a different man, one who didn’t play basketball and read Sports Illustrated like before, one who baked his guns clean and read Guns & Ammo. Our house and garage and vehicle, my spouse, carried instruments of death. The 9 mm handgun on the dresser, shockingly heavy to me, could have been picked up, dropped, fired, by fingers smaller than mine. And I couldn’t forgive that.

This love affair with guns has led to a push to "normalize" the shooting and carrying of guns in public places. It is not really about self defense. It's about an agenda to get the rest of us to approve of guns everywhere. What we have now is back yard shooting ranges in residential neighborhoods like this one in Florida that is apparently legal. And even though, on the face of it, this is a very stupid and dangerous law, or lack thereof, because it is legal, nothing can be done- until some innocent child or adult is killed by one of those bullets that is bound to go astray. Where is common sense?

In Michigan where the gun extremists managed to get a law passed allowing guns in schools,  a local school district has had to concoct a flow chart for how to deal with people with guns in their schools. No, I am not making this up. Check it out for yourself and see if you think this is the definition of insanity:

A visitor spotted with a holstered handgun -- a pistol or revolver -- would be taken into a designated area and asked the purpose of the visit, according to the chart.

Should a visitor have an unholstered pistol or any long gun, such as a rifle or shotgun, there would be announcement of a lockdown and the building principal and law enforcement would be called in.

Craig McCrumb, Durand schools superintendent, has said the guidelines and protocol have been discussed so the district is proactive on the issue, with safety in mind for the students. The guidelines are not yet approved.

"We still see ourselves fine-tuning the document. It could stay the same or it could still yet be tweaked," he said.

Below and to the right is the flow chart, which comes from the above linked article. If you think this is the way our schools should protect the safety of our children, raise your hand. 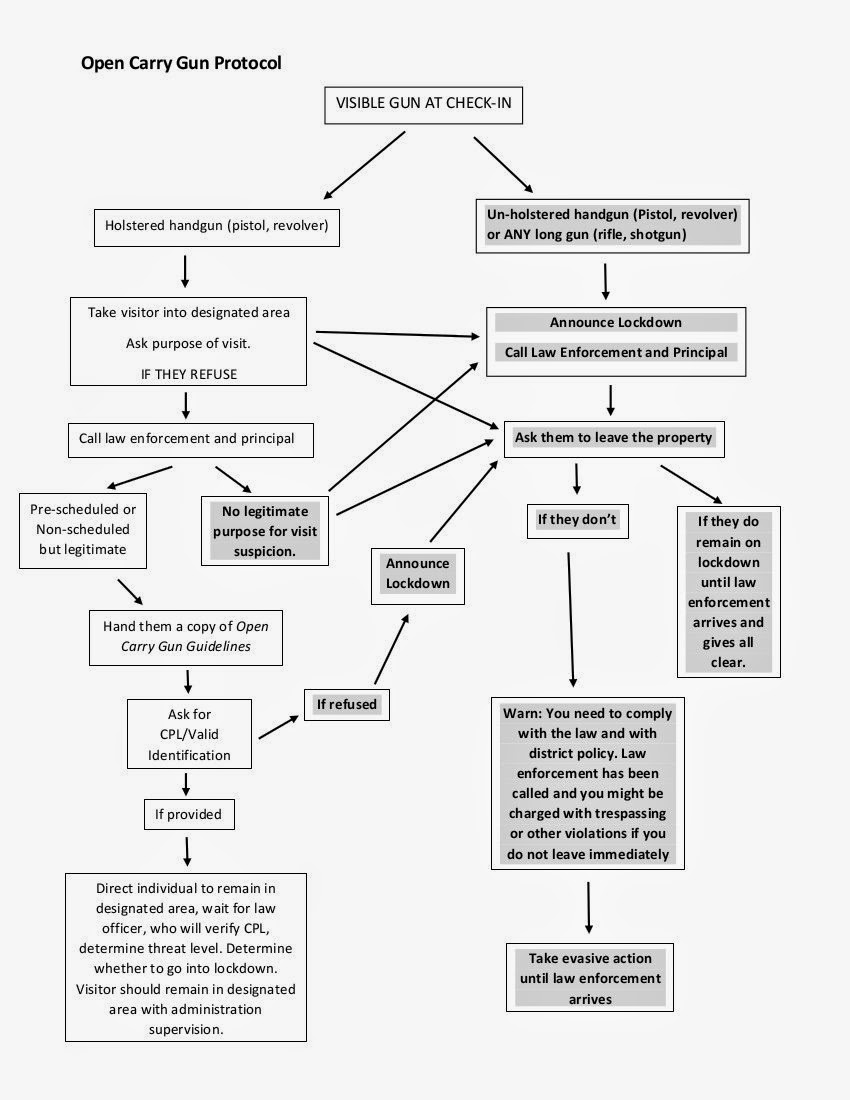 And if said visitor with a holstered ( or openly carried) gun means bad intent, what then? It's too late. How will the school know who is whom? Is the gun carrier a "good guy" with a gun or a "bad guy" with a gun? This is ludicrous and unnecessary. There is no need for guns in schools. To think that a parent or visitor with a gun just may be at the right place at the right time to stop a school shooter is like whistling in the wind. The chances are slim to none. And even if they were, the chances of being able to stop a shooting before it happens are also slim to none. But if a school administrator has to stop and ask a potential shooter ( because they won't know one from another) a bunch of questions, time is lost in locking down the school or trying to prevent the person from entering.

A minority of gun owners believe themselves to be potential heroes however so this is what we get. Either that or they find every place they go to be so dangerous that they can't be without their guns. The truth of the matter is that more kids are shot in their homes than in schools. And that, mostly, with legally purchased guns by law abiding citizens. Never mind the facts. When you are having a love affair, facts don't matter. From the linked article:

However, fewer than 2 percent of student homicides — whether by gun or any other means — take place at school, on the way to or from school or at a school-sponsored event, according to the National Center for Education Statistics. From July 1, 2010, through June 30, 2011, the most recent year for which data are available, 11 of the 1,336 homicides (0.8 percent) of school-age children happened at school. While that number fluctuates each year, it has remained below 2 percent since the Indicators of School Crime and Safety annual reports started in 1992.
The CDC estimates the odds of a student age 5 to 18 being a victim of a school-associated homicide at about 1 in 2.5 million.
Nonfatal gun violence occurs in schools only sporadically. According to a 2013 report from the Bureau of Justice and Statistics, most nonfatal gun violence (across all age groups) occurs at the victim’s home (42 percent) or in an open area, on the street or on public transportation (23 percent). Less than 1 percent takes place in schools.
In other words, despite the significant hours children log at school and despite a rise in active shooter situations in and outside schools, children are more likely to be shot at a friend or relative’s house or in a parking lot or garage or shopping mall than at their school.
“Schools are safe,” said Larry Johnson, the president and director of public safety of the National Association of School Safety and Law Enforcement Officials, which oversees school security programs. “I think people are forgetting the fact that schools are sometimes safer than the homes."

Further, because of our love affair with guns, it is now legal in some states like Michigan for a visitor to a school to carry a loaded gun around where children gather to learn and play. So who will get fired or be in trouble if someone on the staff, presumably an administrator, questions the visitor with a gun? Because these folks don't want to be questioned about carrying guns around and when stopped, they challenge the person who stopped them. It's just a matter of time before a school principal will be sued because he/she questioned the legality of a gun carrier in his/her school. This is the definition of insanity.

Every day I am sent or run across a large number of articles about real shooting deaths that happen on purpose or by "accident". This one caught my eye because of the stupidity of what happened. A woman who was arguing with her new husband over who was going to drive the car home tried to put the loaded gun in a "safer" place in the car and the gun discharged somehow killing her own niece. She was sentenced a few days ago for the shooting that occurred last April. Now the lives of a whole lot of people are forever changed because a loaded gun was somewhere within easy reach and combined with drinking alcohol, an innocent person is dead. The whole thing was avoidable and irresponsible. But when we have a love affair with guns, this is the price we pay.

There is no common sense when it comes to gun policy in America. It is based on fear, hyperbole and the influence of a very well funded and fierce lobby sponsored by the gun industry which encourages more guns everywhere. It doesn't have to be this way. We are better than this and can change the conversation about guns and gun violence as well as pass some reasonable gun safety laws to stop some of the daily shootings. It's well past time to do this and time to get to work.