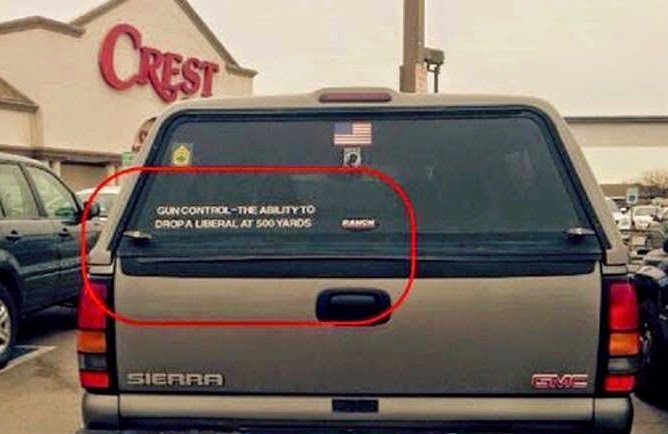 Some days I am overwhelmed by the number of stupid and dangerous things that happen in America with guns. Actually, it's most days. The stories I include today are the ones the corporate gun lobby doesn't want you to hear. They just don't fit with the tired old "guns make us safer" philosophy.

First of all, you've gotta love the photo on the left taken by a friend. Can you read the sticker on the back window of the car? It says: "Gun Control- The ability to drop a liberal at 500 yards." Hahahahahahah. I also love the American flag decal. Such patriots are enough to make me sick. Is it American to want to shoot those who disagree with you? Oh wait...... Disagreements among family and friends result in gun deaths and injuries every day in communities all over our country. God bless America.

I know we disagree but I don't want these guys ( they are mostly guys) dead. I just want them to stop being so creepy and threatening. They are the guys with the guns. Do they get to make the rules? Let's ask Wayne LaPierre- the chief of the fear and paranoid rants that encourage people like the owner of this car to display the decal. See video below:

And then let's ask LaPierre and the owner of the car pictured here if they think it's OK to use a gun to attempt sexual assault against young girls on a Colorado ski slope?

And well, yes, this happened- 2 young South Carolina girls killed their 16 year old brother with a handgun found in the home. The parents were not home. There was a 3 year old also in the home. This is actually an awful story of a young girl who had been sexually abused by this brother and an uncle.

A woman running for Mayor in a small town in Colorado pointed an AR-15 at someone in a park. Nice.

This 3 year old Alabama boy found a gun on New Year's Eve and shot himself. He died. From the article:

Theresa and Quinton Sr. said they had never had to use the gun, but keep it in the house for protection.

"We live in a bad neighborhood, and you never know what might happen," Theresa Gibson said.

Still, whenever a firearm is in the home, there is a danger of the child finding it, she said, adding that she now realizes the importance of securing their gun.

Theresa Gibson is still coping with the loss, but says she hopes other families can learn from their tragedy.

3 Georgia men, previously arrested, have been charged with domestic terrorism.These are our home grown terrorists equipped to carry out terror attacks against their own government. From the article:

During the conversations online, they discussed using guerilla war tactics and planned to launch attacks against a metro Atlanta police station and several government agencies in February 2014.

The three men attempted to “recruit other individuals to join them and to carry out similar operations in those individuals’ home states.”

Peace allegedly told other militia members to choose targets including “road blocks, TSA checkpoints, sheriffs/police conducting operations outside the Constitution” as well as to participate in the “removal of government people who support extra-Constitutional activities.”

4 were shot and injured and one man died at a Kansas gun shop that caters to women. This was an armed robbery. I wonder what the robbers wanted? The police don't seem to know at this point. According to the business owner next door, there was a "gunfight". Only in America.

This one was no "Breakfast at Tiffany's"- a North Carolina wife shot her husband (who is a Fort Bragg soldier) when he thought he would surprise with breakfast in bed. It didn't go well. Luckily for all, he will be OK except for the embarrassment and the fact that one of this married couple tried to shoot the other. At the end of the article- this quote: "“Even at night, I wake up at night and say ‘Okay, did I just hear something?’ But I wouldn’t open fire just like that.”"

And our friend George Zimmerman has, of course, been arrested again for assault. Do I need to say any more about this one?

In the category of "you just can't make this stuff up" comes yet another "law abiding" gun owner story. An Indiana man was arrested for selling a gun to an under cover cop through an Internet site. But what police found when they searched the man's cell phone was a video of him encouraging his one year old baby to put a gun in his mouth and make a "pow" noise. Really? Nice. This link has the video so you can see for yourself what some parents think is OK. You can read a Brady Campaign blog post about this as well just published as I was about to post this one. From the post:

Most parents who bring guns into their home have more sense than to shoot images of their kids holding deadly weapons. However, what many responsible, gun-owning parents don’t realize is that bringing a gun into the home increases the risks of suicide, unintentional shootings, and homicide. One out of three homes with children in this country has guns, many left unlocked or loaded. Each day, seven kids are killed by guns in this country.

We can prevent many of these tragedies by helping families understand the risks of guns in the home and make safer choices about gun access and storage.

The Indiana video and the Alabama Facebook photo should serve as reminders to all parents to keep guns locked away securely. They are also reminders for parents to raise concerns and awareness about the dangers of unsafe access to firearms with friends, family, neighbors, and colleagues.

We can all help ensure that children do not come across an unsecured gun by asking one question that could save a child’s life: “Is there an unlocked gun where my child plays?”

Good advice. We all wish more people would follow it. Lives and injuries could be saved. Read below.

Another child accessed a loaded gun and shot her brother in Florida. A quote from this article: ""Not to make an early assumption here, we don't know what happened, but as an overall message things like this [are] the reason why it's important to maintain your firearms and keep them put away and keep them out of reach," said Sgt. Chris Estes of the DeLand Police Department." Duh!

And speaking of children accessing loaded guns, a grandfather was shot in the neck by his 3 year old grandson. Lesson here? Don't take a shower with your gun sitting nearby. It's a really #badidea.

And in Idaho, again, there has been a spree shooting. 3 are dead.

An off duty police officer accidentally shot a friend while showing him his new revolver.

So, that's quite a list, right? There will be many more like the ones I have included here and these have just scratched the surface of what is going on every day in our country. All I can say is that until we get some common sense about guns and gun safety reform things will not change. Most gun owners are safe with their guns. But the fact that so many are careless points to a culture of guns that leads people to be cavalier about their guns. There is not enough training for operating a gun. There is not enough awareness about the risks to gun ownership and gun carrying. The gun lobby needs to get serious about first, admitting to the problem, and second, doing something real about it. Until we change the conversation and start dealing with our nation's public health and safety gun violence epidemic, Americans will die in senseless, avoidable deaths. Cavalier behavior with guns is becoming the norm. This is insane. Lives are lost because of it. But we can change it if we make enough noise, ask the right questions and demand gun safety reform.

It's past time for a change. Let's get to work.

As always, there is another story about cavalier gun behavior as soon as I am finished posting. A 5 year old accessed a loaded gun and shot another 5 year old in Chester, VA. Irresponsible adults were in the home at the time.

An Alabama man made a mistake when he reached for his phone but got his gun instead. To make it worse, he was driving at the time and his passenger had to take the wheel or this would have ended more badly than it dead. How often does this have to happen before people realize that their guns are dangerous and risky?