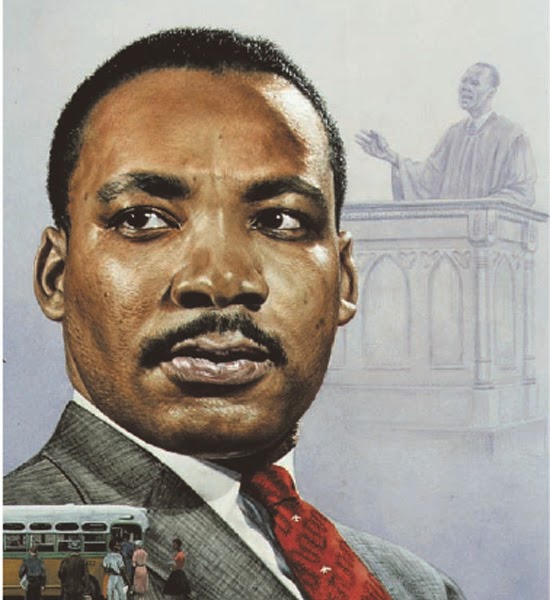 Today is the day we put aside to honor Dr. Martin Luther King Jr. He was shot and killed in Memphis, Tennessee on April 4, 1968. My husband and I went to the movie "Selma" recently. There is controversy about this movie, most particularly about President Johnson's support of King's demands for strengthening the voting rights of black citizens.  In spite of this, the movie reminded us that the racism and intolerance of the 1950s and 1960s is not over. Nor is the violence. The same year, 1968, Robert Kennedy was assassinated by a gunman. After that, Congress passed The Gun Control Act of 1968 in an attempt to stop people from being able to order guns from mail order catalogs by prohibiting interstate transfer of guns to individuals. It was too easy for assassins to get guns without buying through licensed dealers. The law established the licensing of firearms dealers among other things, a system still in place today. It should be no surprise that even in 1968, the gun lobby's voice was heard in opposition to the bill. From the article:


In his remarks upon signing the act in October 1968, Johnson said: "The voices that blocked these safeguards were not the voices of an aroused nation. They were the voices of a powerful lobby, a gun lobby, that has prevailed for the moment in an election year."[8]

Since 1968, more Americans have died from gunshot injuries than Americans who have died in all wars combined. Also since 1968 the market for guns has changed. More private sellers are selling firearms at gun shows and flea markets and through Internet sites. That means that about 40% of gun sales go without the background checks that were required in the 1994 Brady Law.

There are many rumors and myths about King that are disputed in this Snopes.com article. Another such myth comes from the gun rights community who claim that MLK had a license to carry a gun and thus supported gun carrying and gun rights. It's another falsehood promoted by the gun rights community. The NRA's Colion Noir promoted this myth on last year's celebration of Martin Luther King day. From the article:


But Noir's history lesson on King only tells half of the story. In a compilation of King's writings gathered by King historian Clayborne Carson, King described how friends and family urged him to get a gun permit after his home was firebombed. King was denied the permit but later realized that owning a firearm was contrary to his nonviolent philosophy. King got rid of the gun he owned and would only allow his house to be protected by unarmed guards:

As I wrote in my last post, the gun lobby is missing a lot of inconvenient truths. Their leaders may think that if they keep telling a lie over and over it will eventually become the truth. But too many people are watching. The truth matters. Every life matters. What we need is a national conversation about gun violence as it relates to justice and saving American lives no matter the color of their skin.

Thank you to Dr. Martin Luther King Jr. for his common sense and perseverance in working towards dignity and justice for all. His calls for non-violence are still necessary today. From Dr. King- "Nonviolence is a powerful and just weapon. which cuts without wounding and ennobles the man who wields it. It is a sword that heals."