Believe it or not- gun stories 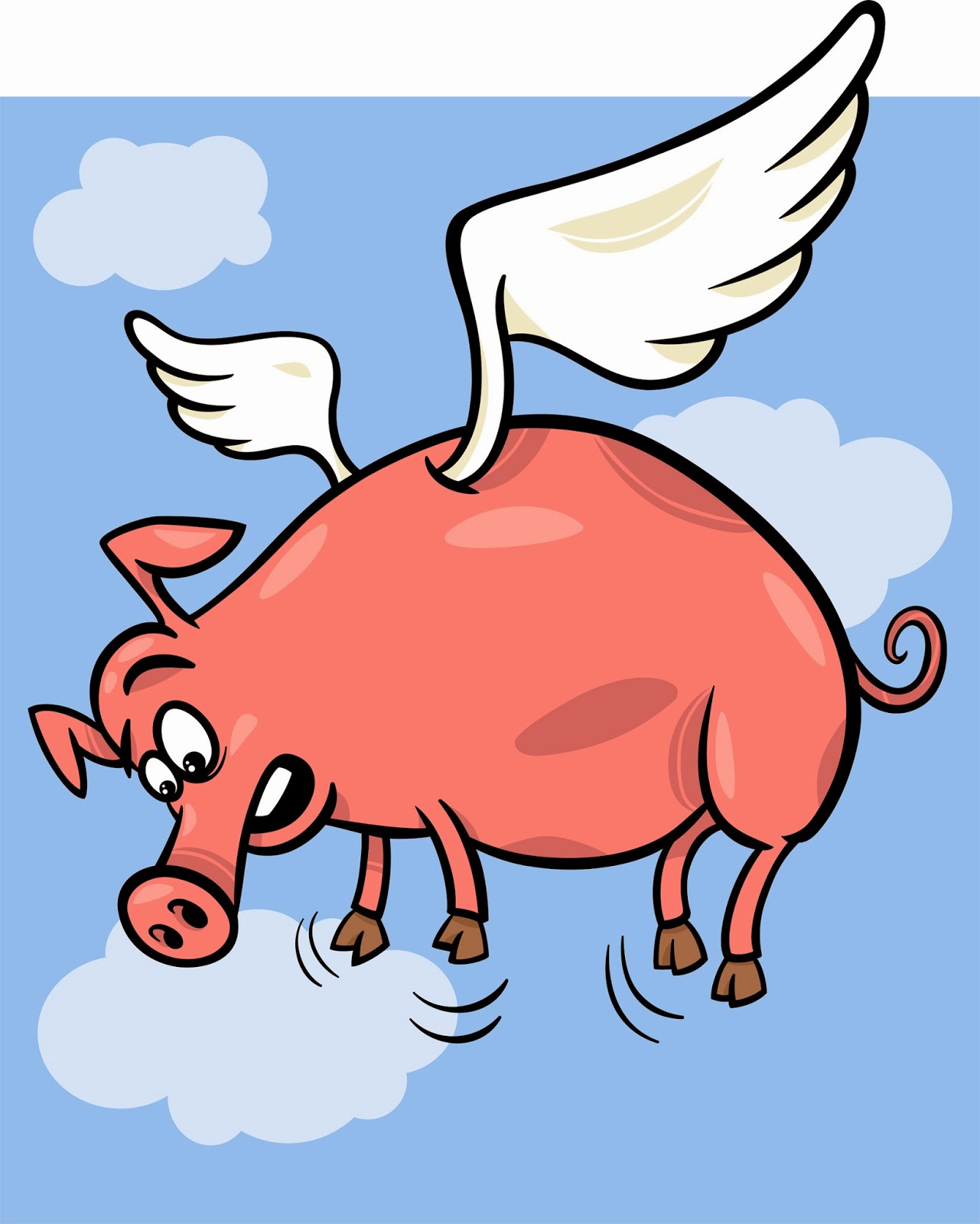 Ripley's "Believe It Or Not has been around for a long time, regaling us with strange and unusual things people have done or created. You can see the top 20 for 2014 here. If I had to pick the 20 worst and/or unbelievable gun incidents for 2014 it would be hard to choose. I think the top one would have to be the 2 year old who shot his mother in an Idaho Walmart with her own concealed gun. Enough has been written about that one. Or maybe the one about the Texas man who shot his own 18 year old son in a dispute with his wife and the bullet continued to the next apartment, shooting a sleeping neighbor. I don't have to go on do I? I write about these all the time. And I always say that you just can't make them up.

When pigs actually fly, then, and only then, should we believe that guns have made us safer. Until then, we need to make sure the corporate gun lobby's deceptions don't fool our elected leaders. Until then, we need to continue to work on preventing tragic gun injuries and deaths. We can't sit back and do nothing- or do things to make it easier for people to shoot others as is happening in some states ( see below).

Speaking of Idaho, check this out for the latest unbelievable and dangerous behavior regarding guns and gun laws. The Idaho Governor just signed a law nullifying all federal gun laws. Right. So background checks on gun sales? Nullified? They want criminals and domestic abusers to have guns now? They want adjudicated mentally ill people to be able to get their hands on guns? We will wait to see what happens. Idaho already has among the weakest gun laws in the country and in the middle of the range of states for gun deaths and injuries. They are proud of their gun culture. That's right up there with something to be proud of as a state all right. And of course, this will be challenged because it is most likely unconstitutional:

Adam Winkler, a law professor at the University of California, Los Angeles, said that both types of nullification laws are unconstitutional.

“Nullification is no more valid today than it was during the 1950s during desegregation or during the pre-Civil War era,” Brady Center attorney Plunkett said.

I guess some folks want to go back to the bad old days. It defies common sense and is totally backwards. The article notes that most of these laws have come forward after the tragic shooting of 20 small children at Sandy Hook elementary school. How can anyone not think we should do everything possible to keep children from being shot in their schools? Unbelievable.

A few other recent news items also qualify for unbelievable. Given more attention paid to access to guns by children, one would think that adult gun owners would be more responsible. But not in this latest shooting of a child in Detroit with a gun found in the home. "Every gun in the hands of a child must first pass through the hands of an adult." ( from KidShootings)

Dogs have been "shooting" their owners with the owners' guns. Yes. Believe it. From the article:


This trend isn’t part of a canine uprising; it’s mostly due to gun-toting Americans who have neglected the simple rules of weapon safety. Usually these stories end up in the “Weird” or “Funny” sections of news sites with headlines like “Doggone,” “Bad Dog,” etc. After all, it’s “funny” when a dog accidently (sic) shoots its owner.... (...) The canine shootings in these cases are ruled accidental, with no responsibility placed on the owner. These stories are simply funny asides, the equivalent of closing the newscast with the waterskiing squirrel, except the story involves people being shot and often permanently maimed due to irreponsible (sic) behavior and neglecting gun safety. This begs the question: is it natural selection when a dog accidently shoots an owner who leaves a weapon lying around with the safety off?

And then 6 stories of dogs discharging guns accidentally injuring their owners or someone else follow.  I think this qualifies for "believe it or not" gun stories.

When guns are so prevalent and so many people own and carry them, this is exactly what we should expect. The opposite is touted by the corporate gun lobby of course. They think we will actually believe that more guns have made us safer. The unfortunate thing is that some people do. And then tragic things happen and the excuses come.

Most gun owners favor strengthening gun laws and understand that doing so will not take away their guns or their rights. Yes. Believe it or not, it's true. I ran across this editorial written in an Idaho newspaper. Idaho- the land of lots of guns where 7% of the population has a permit to carry. From the article:

The NRA, once committed to gun safety and education, is now the political equivalent of an English football hooligan. Disagree and get bludgeoned. All the while, the tragedies continue to mount. As gun people, we plead with the shooting community to demand more from society’s primary pro-gun advocates.

The NRA says guns aren’t the problem; a broken mental health system is to blame. But neither Rutledge, a chemical engineer, nor the 14-year-old who killed his friend in Burley were insane. (...)

Data on gun violence in America is hazy at best. The NRA beats back any attempt to meaningfully measure the impact on society of a weapon intended for one purpose. The dearth of information is laughable. Imagine if deaths caused by car accidents went unreported simply because Detroit thought it would hurt the bottom line. Colt and Remington should be held to the same standard.

The most pro-Second Amendment enthusiast must admit that a society where guns are widespread will see more to deaths, crime and injuries. The conversation should be about the merits of the trade-off, not disputing that fact. (...)

But the NRA instead has benefited from dead school children, by spreading fear of non-existent government incursion. And, as shown by the huge jump in pre-Christmas gun purchases, the fear campaign is working.

More guns on the streets increase the need for education and a commitment to the responsibilities that come with owning firearms. Simply arming the public to the teeth — the NRA’s primary goal — is ridiculous if respect for the weapon isn’t part of the discussion.

It’s time for a real conversation about guns in America, one that’s been silenced for too long. Guns are dangerous, even if the gun industry’s primary mouthpiece refuses to admit it.

Believe it or not, these are the words we in the gun violence prevention community have been using for years. We didn't make them up. Even reasonable gun owners believe them and know they are true. It's a small group of gun enthusiasts who are holding out for a point of view that is becoming archaic and unreasonable given the facts. The shooting of a young mother by a 2 year old child was too much for even Idaho gun owners.

So to end, just a few more of the "believe it or not" gun stories for your edification-
And believe it or not, 41% of teens say they have access to guns and even those who have signs of mental illness can easily get their hands on guns. Never mind common sense. More than half of all gun deaths in the U.S. are due to suicide. Why don't we do something about this national epidemic? It is preventable and avoidable but it is dependent upon "law abiding" gun owners being responsible with their guns. Is that too much to ask? Guns are a risk to those who own them. What don't people get about this? Don't they believe it? Or is that, as the first article written by Idaho gun owners reminds us, the NRA ( aka corporate gun lobby) have convinced many gun owners that guns are good for them and will make them safer. They have been deceived.

It's time for that national conversation about guns as suggested by the editorial piece above. No more silence. Lives depend on it.

It only took a few minutes before this unbelievable story caught my attention. In California, a 3 week old baby was found dead in a dumpster after her parents were shot and wounded. There isn't much more to say about this one.

I saw this one over the week-end but didn't include it though it is clearly unbelievable. How is it that an Indiana police chief could twice "accidentally" shoot himself? We all know that police officers make mistakes with their guns. But twice? I noticed in one article that the cure for this was to make sure you don't have ties on your clothing to get entangled with your gun. That's the way to prevent these type of shootings? How about common sense and better safety practices? How can this guy look himself in the mirror and think he is going to keep the community safe when he, himself, can't seem to handle his own gun properly? Guns are dangerous.

I wrote this one too soon because I just happened upon this one showing a video of a Kentucky police officer "accidentally" shooting himself in the stomach while in an elevator. Unbelievable. You just can't make this stuff up.

Maybe I should just write a new post about "believe it or not" gun stuff. In Oklahoma, soon enough in the sooner state, people will not be able to wear hoodies apparently. Really. Are these folks kidding? So Trayvon Martin wore a hoodie and got shot for it. He was not the perpetrator; he was the victim. How does this protect anyone? Or is this about race? What is this about anyway? Such nonsense is only making people less safe and less free. The gun rights folks love their freedoms to own guns but when it comes to other people being free to wear what they want- not so much.