Bad news for the gun lobby 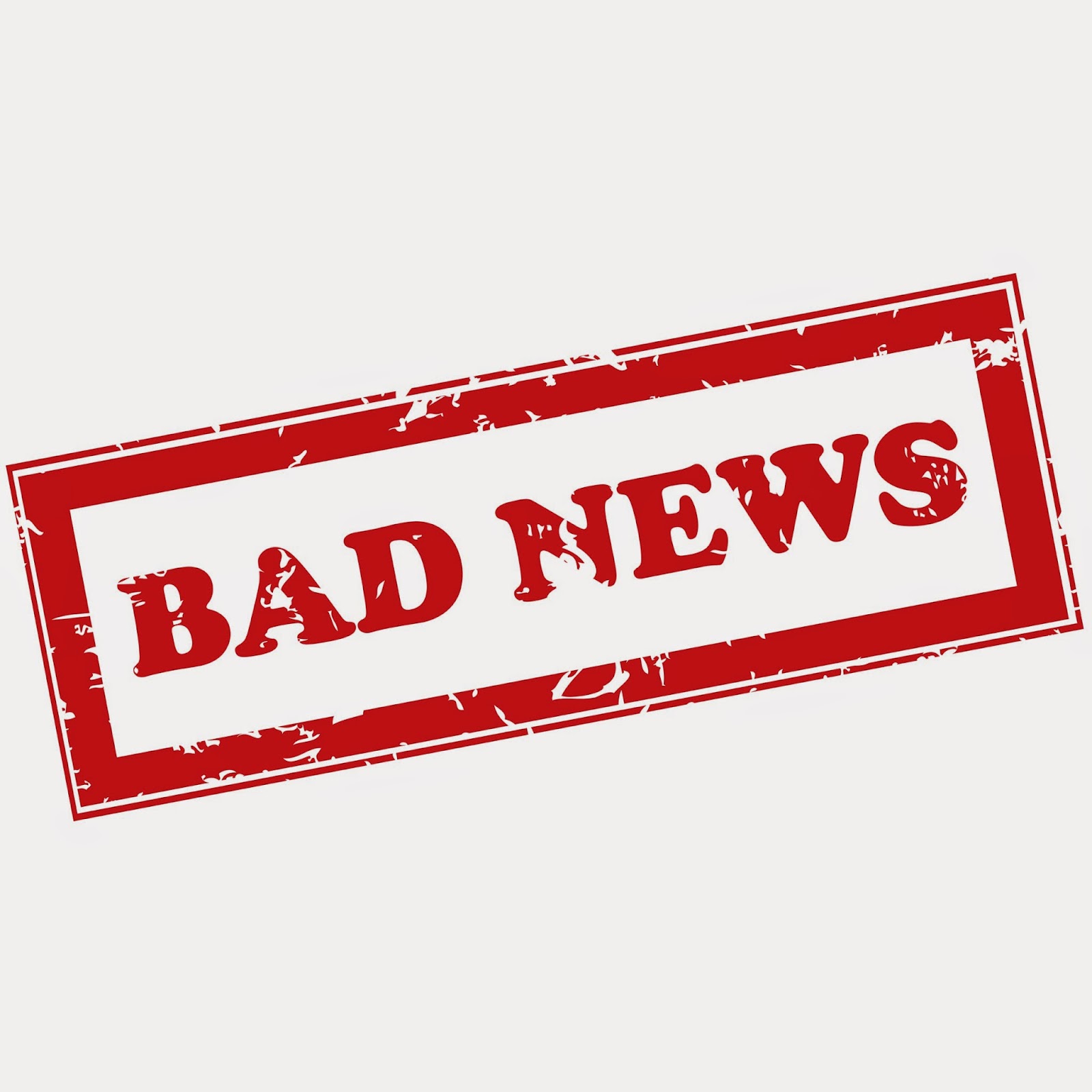 I had a different post in mind when I started this. It's been a terrible week for the gun rights extremists. So much bad news in the past few days caused me to write this post instead of the one I had been working on. I have had some good discussions with folks at various events in my community in the past few days that have energized me and also reinforced what we know- the public in general does not like hearing the bad news about all of the avoidable and senseless gun deaths. The most heinous are those of child shootings. So, first, here is a press release from the Brady Campaign about 3 shootings in particular that have called attention to our nation's dangerous gun culture:

"Our hearts go out to three families in Missouri, Florida, Michigan who have suffered tragedies this week due to the dangers of unlocked, loaded guns in the home.

On January 19, 2015, a five-year-old in Missouri found his grandfather’s gun and unintentionally shot and killed his nine-month-old brother.

Two days later, a two year old in Florida found, played with, and unintentionally shot himself fatally in the chest with his father’s gun.

And in Michigan that same day, a three-year-old was killed in an unintentional shooting.

These are just a handful of stories that represent the thousands of children shot unintentionally each year. In America, 1 out of 3 homes with kids have guns and nearly 1.7 million children live in a home with an unlocked, loaded gun. Far too many children have access to guns and, more often than not, they know where the guns are stored. Every day, seven children and teens are killed by guns and another 44 are shot and survive. These shootings are more likely to occur in a home than anywhere else, according to the Brady report “The Truth About Kids and Guns”. In the cases of unintentional shootings, almost half the time the shooter is a family member, often a sibling."

Let's start with the shooting of the 9 month old by his brother. I can hardly write about this one without thinking of my own children and grandchildren- nor should anyone. If you don't think it can happen in your family, think again. This woman never imagined that her own father could have been so irresponsible and says so. How awful for this family- they will never be the same. The mother grew up with guns and learned how to shoot them. So what? If a gun is accessible to a 5 year old, someone missed common sense somewhere in their gun safety training. It is, again, the cavalier way in which some gun owners view their rights, their gun safety and their own responsibilities that is leading directly to avoidable gun deaths of young children. This was a baby. The 5 year old said he was sorry. We're all very sorry for their awful loss. The status of our gun culture is sorry. What happened here was unimaginable. This was really bad news all the way around.

Now, the Florida 2 year old. From this article:

A Florida toddler shot himself in the chest and died Wednesday after finding his father’s handgun in a glove compartment.

The Pinellas County sheriff said 2-year-old Kaleb Ahles was placed in the car by his father about 4:45 p.m. as they moved out of their home, reported WFLA-TV.

The boy found a .380 caliber handgun his father kept in the vehicle, investigators said.

Kevin Ahles heard a gunshot, turned around, and saw his son bleeding from a wound to his chest, the sheriff said.

I love the next paragraph:


“It’s just one of those things that happens where everything lined up the wrong way where we had a 2 1/2-year-old that was able to take a gun, pick it up, turn it around, and he shot himself dead center in the middle of the chest,” said Sheriff Bob Gualtieri.

No, it's not just one of those things. This was a totally avoidable death. The father should not have left his loaded gun in his car glove compartment. Kids are curious. Guns are dangerous. More bad news.

Benton Charter Township Police say they were called to 1619 Norton Street at 1:18 a.m. for reports of a gunshot victim.

When they arrived, they found a 3-year-old with a fatal gunshot wound. He was pronounced dead at the scene.

Investigators say the death appears to be the result of an accidental discharge of the gun.

"Last night I was about to go to sleep and everything and I heard some kind of commotion and some screaming so I came outside my door, and about 4 or 5 cop cars rushed up,” said neighbor Jimmey Bolin.

Investigators said they recovered two guns that were registered to a person who lives at the home.

No one else was injured.

Bolin says he could hear the family's hysterical screams echoing into the early morning hours.

These families did not intentionally expose their kids to guns nor did they believe their actions could be harmful to their children. That is the problem. Is the gun lobby making sure that people who buy guns understand the risks associated with loaded guns in homes? That is where the problem lies." Every gun in the hands of a child must first pass through the hands of an adult." Don't you think it's time to talk about this public health epidemic?

And now that I'm done writing about avoidable deaths of young children I want to write about the recent shooting of a Cardiac Surgeon in Boston. First off, 2 of my family members are health care providers. This is really scary to me. Secondly, a good friend told me last night that her son is a physician working at Boston Brigham and Women's Hospital. Too close for comfort for him. Let's look at some details about the shooting of the surgeon from this article:


According to Kathy Curran of WCVB, Stephen Pasceri had a license to carry a gun. She also reports that he’s a resident of Millbury, Massachusetts. Police have said that Pasceri’s family had no idea of his intentions. Ryan Schulteis of WHDH reports that Pasceri’s friends and family “are in shock and say he was the nicest guy.” He is married to a woman named Teresa, who works in a hospice. The couple had children together. Stephen Pasceri worked as an accountant.

Right then. Guns make it all so easy to take care of alleged slights or wrong doings or to get even with someone. Do you shoot a physician because a relative died? I guess some people do. And further, people almost always say that the shooter was a "nice person" and they are in shock that he/she could possibly have done something this awful. People shouldn't carry guns everywhere they go. It should be more difficult for "nice" people with bad intentions to kill another human being.

And speaking of more awful and senseless deaths by otherwise law abiding "nice" gun owners, can we talk about the recent discovery of the bodies of a family in a Minnesota home? They had been dead since around Christmas time. Some have expressed concern and questions about how this man could have shot his wife, 5 year old child and himself given that he didn't appear to be distressed before the incident. But the case has now been ruled a murder/suicide. Some in the conspiracy theory world don't believe that this young man could have done what he did. The young man had a following of sorts and was making a film about a tyrannical government take-over of America. It was a dark and violent film according to the trailers. And it wasn't getting traction. Was that enough to take the lives of your wife, your young child and yourself?

The thing is, shootings like this happen every day in our country. There are shootings involving arguments over money, separations, domestic disputes, suicidal thoughts, despondency, alcohol and drug related shootings and others. Way too often, family and friends are surprised by the shootings and just don't imagine that things could have been so bad that this otherwise apparently nice "stable" person would shoot a family member or a friend or him or herself. And that might be conventional wisdom. But my personal experience says otherwise. People shouldn't die or take their own lives over things like I mentioned. But they do. And guns make it very easy to accomplish leaving devastation to families and communities all over America.

The bad news keeps coming. The 2015 victims and survivors of gun violence are piling up and our leaders continue to do nothing. The gun lobby continues selling guns and persuading people with their fearful and paranoid version of the world. It's working. People are scared to death of the wrong things. They are literally killing their family members and themselves. We need to demand change to our gun culture and the conversation we aren't having. Let's get to work.

I am sorry to have to write about another shooting of a toddler. This Indiana 3 year old was shot in an "accidental" shooting. Adults were in the home at the time. From the article:

Emergency personnel pronounced the toddler dead at the scene. The father told police he didn't think the child knew where he kept the gun.

Two handguns were located in the home, both legally registered to the boy's father. The gun involved in the incident was identified as a semi-automatic 9mm handgun.