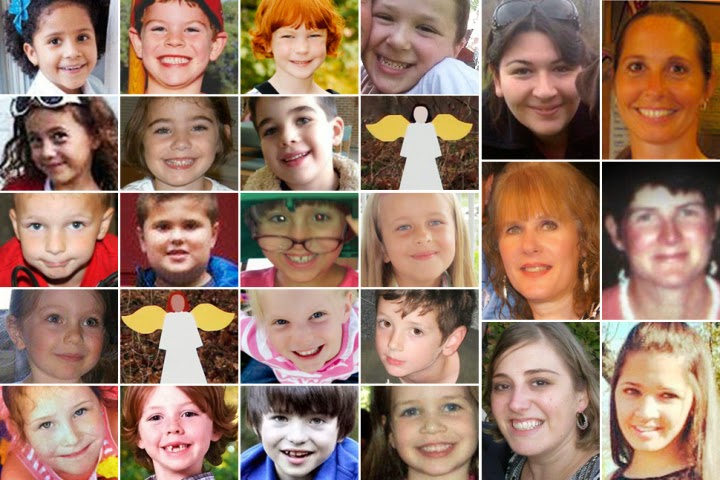 Today is the second anniversary of the shooting of 20 first graders and 6 educators at an elementary school which name has now become known for the most horrendous school shooting in America- or likely the world. Given the nature of the shooting, it became world news immediately and the world mourned. Not only did the world mourn, but collectively the world was stunned that anyone could so brutally murder small children for no apparent reason. And then the world wondered how a country like ours could tolerate the proliferation of gun violence day after day after day. It's no secret that our gun laws allow easy access to guns for just about anyone who wants them. And our gun culture has created a cavalier attitude towards guns. This attitude contributed to the idea that the mother of the troubled shooter thought maybe exposure to guns would help his mental and learning difficulties. She was, of course, totally wrong about that. The majority of guns used in school shootings come from home. Easy access to guns is a serious problem.

Let's look at just a few of the things that have happened since that awful Friday 2 years ago.

I could go on. But I want my readers to read this message from Nicole Hockley, a Sandy Hook parent. The letter is written to the mom she used to be. If you read nothing else today, this should be the one thing that gets your attention. From her letter:

Taking action to protect children from gun violence can take many forms. For some people that means fighting for policy and political change — that can be a long, frustrating road, and certainly not the only option. Small but meaningful actions create change. If you have five minutes, start a dialogue at the dinner table about gun violence with your kids. If you have two hours, host a conversation with other parents. If you can dedicate one day a month, work with educators on how to better recognize the signs of children who may be troubled and reach out to their parents immediately. But to do nothing? That doesn’t honor the dead and doesn’t protect the living.

One of the most important actions families, schools, employers and communities can do is learn the signs of someone in crisis and then intervene before they hurt themselves or someone else. We need to teach kids better anger management and conflict resolution skills, because much of gun violence stems from anger and fear. Learning other ways to deal with anger and fear rather than striking out at someone is a good first step. We need to recognize the signs on social media— and know the difference between someone who is just angry and someone who poses an imminent threat. Lines of communication always need to remain open between ourselves and our children.

I am beginning to feel some of my old optimism returning, because more and more people are engaging around this issue. Our conversation is gaining momentum. I sense a sea change is coming. I know everything we’re doing at Sandy Hook Promise will protect more children. We’re fighting a good fight.

But after every sort of victory, there’s also a moment of incredible sadness for me, for whatever happens, I know I still can’t bring Dylan back. That hole will never be filled. No matter how many lives get saved in his name, or in the name of others, I can’t go back. But you can go forward and make a difference.

(Nancy Lanza, mother of the shooter, appears on some lists. She was the first murdered with her own guns by her own son who then went to the school and murdered the others.)

There’s no doubt that horrible day was a tipping point that had been building like a tidal wave: a mass-shooting in a movie theater in Aurora, Colo., the attempted assassination of Congresswoman Gabrielle Giffords (and the killing of others with her in Tucson, Ariz.) and many other incidents, whose names you don’t remember, in the two years leading up to Newtown. But I’ve been writing and talking about this issue for over a decade, tracking how we’ve let the equivalent of those who think there should be no drunk driving laws decide which laws should regulate guns. Before Newtown, it was a lonely beat. No longer.
Change never comes easy, which is why Martin Luther King, Jr. famously said, “The arc of the moral universe is long, but it bends towards justice.” Clearly, we still have a long, long way to go before we even have even the most basic sanity in our gun laws on the national level. But from public perception to the numerous defeats suffered by the ignominious sand-pounders known as the National Rifle Association in recent elections, the arc has begun to pick up the pace.
This is by no means to imply that manic, fluoride-phobic, tri-corner hatted half-wits are not still trying to dragoon the United States of America into governing via armed warlord. They control way too many state legislatures—which just got worse with the 2014 election—and have applied their usual lack of critical thinkingand rain dancing to how we handle guns in many states. They continue to find willing recruits among an aging white working class that’s seen its domination over women, people of color and other “others” decline, and that needs to embrace some symbol of power.

Yes, we have work to do. But thanks to Schecter and the many others writing about the need for change to our gun culture and our gun laws, I believe change can and will happen.