Only in America. There have been 2 mass shootings in less than 12 hours. The first one happened in the library of the Florida State University. 3 students were injured. The shooter was shot by armed campus police. It sounded frightening at the least. One student was apparently saved by a book he had taken out from the library. News shows have shown a photo of the book with a bullet hole in it. Below is the message that is making the rounds on Social Media from one of the students in the library to her parent. 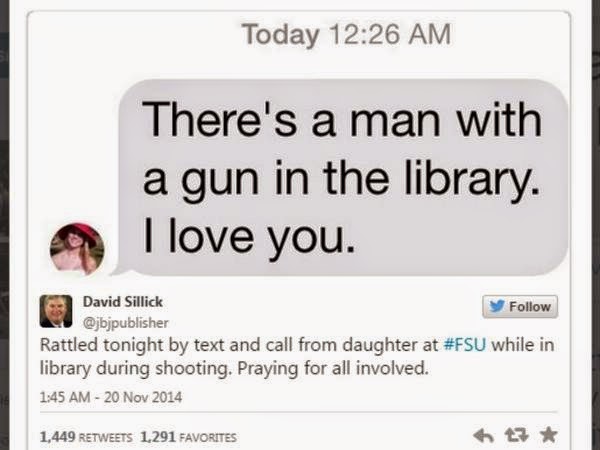 This is something no parent wants to see. Parents should know that their children are safe from gun violence while at college. But of course in America, colleges seem to be the location of many of our country's mass shootings. For that matter, so do high schools and then again, middle schools and elementary schools.

From another article we are learning more about the shooter who allegedly was a former FSU student and a law school graduate. From the article:

She said she had known him since he was about 13 or 14 and that he ran cross country with her kids and stayed at her house a lot. She said he lived with his grandmother after coming out of a "bad situation" with his parents.

"He was having some financial issues and moved back home and decided he'd come back to Florida to work," she said. "My heart's broken. In a million years I wouldn't have thought he'd do something like this. He was struggling, having decided that what he was doing out there was not good. He had some issues and just decided he'd come home.

In America, a lot of "troubled" people have easy access to guns and live in a country where guns are seen as some kind of solution to a problem or a way to seek some kind of revenge or take one's own life but decide to take others along. One person interviewed for the story above thought the shooter wasn't in his right mind. Who is when they decide to go somewhere and shoot up a bunch of people? Many people have financial, family, emotional and other problems. People all over the world have similar problems. But in America some of these folks shoot other people over their problems. Our history is littered with the names of shooters like this man allegedly was. The shooters at Columbine, Virginia Tech, the Tucson shopping mall, an Aurora, Colorado theater, Sandy Hook elementary school, Marysville high school, etc. You get the picture. It's a picture we shouldn't have to see. Where is common sense?

The second shooting was what appears to be a domestic shooting. Two small children are dead in a New Jersey home and another adult and child are injured. This, too, is an all too familiar scene in America. It happens in every state. And it will continue to happen as long as we turn the other way and refuse to take on the gun culture promoted by the corporate gun lobby. Surely we are better than this.

I want to add two things to this post. The first is an article that echos what I wrote about the two reactions to mass shootings expressed by the gun extremists as opposed to most Americans. From the article:

The gun lobby acknowledges the problem of mass-shooting incidents in the United States. Its solution calls for arming more people who could potentially stop a shooter and for rapid-response training focused on minimizing casualties. This is part of an increasingly pervasive, insidious gun culture that accepts mass shootings as inevitable. But by this logic, the first victims—friends, loved ones, children—are expendable. The first victims of a mass shooting are a mangled human sacrifice on the altar of Second Amendment rights.

Until a shooter pulls the trigger to begin his slaughter, he is merely a guy with a gun. The gun lobby insists that the government should allow people to carry firearms into all public places. (Gun advocates continued to push for expanded open-carry legislation the morning after the Tallahassee shooting.) After all, who are we to judge a man simply because he is proudly displaying a gun by his side? In this world, the first victim is merely an alarm for others to respond. (...) With reasonable preventative measures off the table, gun advocates are making it easy for violent or unstable individuals to access and use firearms in acts of mass violence. In arming bystanders as a solution, the NRA and other pro-gun groups are simply telling first victims and their loved ones that their lives are worth less than gun owners having to consent to a basic background check. For the rest of the victims, well, you had a chance to arm yourselves.

Right. The second article is the statement from Dan Gross of the Brady Campaign about the Florida State University shooting:

“Our thoughts are with the victims of this morning’s shooting at Florida State University, as well as their families and the entire FSU community. While the circumstances of this horrible incident remain under investigation, this morning is yet another reminder of the gun violence in our country that claims nearly 90 American lives every day and injures more than 100,000 every year.

“We know that there are real solutions to reduce and prevent gun violence – from passing laws that keep guns out of the hands of criminals and the dangerously mentally ill to inspiring safer attitudes and behaviors around guns in the home. Today’s tragedy should serve as an urgent call to action to every American tired of living with the gun violence in our schools and homes and on our streets to raise our voices in support of the solutions we know exist.”

Florida received an “F” grade in our 2013 state scorecard analysis because of its weak gun laws – in particular for its lack of expanded Brady background checks that would prevent criminals, domestic abusers and the dangerously mentally ill from purchasing guns without a background check.

I think we can safely say that we are living in a crazy and dangerous country when a second shooting occurred on a college campus in one day. This time, the potential shooter was a man acting strangely on a Louisiana campus who was stopped by armed officers before he did harm to others:

Shreveport Police Department spokesman Cpl. Marcus Hines said the man pulled out a handgun during a struggle with two Centenary College Department of Public Safety officers. In response, one of the officers fired at least one gunshot at the man in front of Magale Library, where he collapsed.

The officers were escorting the man off campus because he had been exhibiting "peculiar behavior," Hines said.

Why so many people acting peculiar with guns? Where do the guns come from?
Posted by japete at 1:00 PM