Can we talk about the gun lobby? 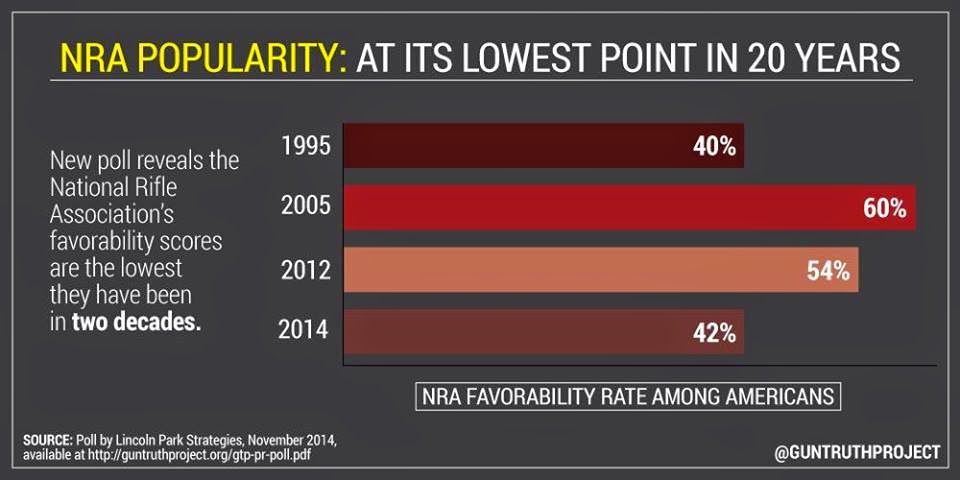 In years past the main purpose of the National Rifle Association was to provide gun safety and marksmanship for members. The organization supported "gun control" measures as well that they now adamantly oppose. It was an organization meant to be supportive of mostly hunters and recreational shooters and, in the beginning, citizen militia members. But things have changed. Remember the days when people did not feel it necessary to have guns in their homes for self protection? Or if they did, they were mostly hunting guns of some kind? I do. I grew up with hunting and hunting guns around. Most of my family and my parents' friends were hunters or gun owners. My husband also grew up hunting with his family and is still a hunter though an infrequent one. Neither of us or people with whom we associated talked about the need for a gun to protect themselves or their families. There were not assault type rifles around in common use for citizens. No need.

But then in 1976 political and radical changes happened to the NRA and that's when a new direction took the organization down the path it is now on. The gun industry also changed to reflect all of this. In fact, that is the biggest change. The NRA used to be in favor of gun safety. Now it is an organization in favor of gun sales over gun safety. There is no question that the two are related. When fear and paranoia are ramped up leading Americans to believe that guns are necessary for self protection and/or to fight against their own government, gun sales go up. So keeping people fearful benefits sales. Actually now, gun sales are down which explains the hysteria that occurred in the recent election. I wrote about that in a recent post. There's a lot more money funneling into the NRA than membership dues. I have written before about the ramped up member numbers to make the organization look more powerful. Obviously the memberships alone ( at $35) could not be funding the vast amount of money spent on lobbying and election activities.

In speaking about this to a friend at my church who is a hunter, he expressed disgust for the NRA political ads in my area. He hasn't ever been a member of the NRA but because he has a Cabelas charge card and buys ammunition for hunting, he gets NRA "information" that he hates. Is he considered a member because he gets fliers and printed information from them? Another woman at my church was involved in this discussion before the election and said that her father bought her a life-time membership to the NRA when she was a young girl. She has never hunted or purchased a gun. But she is presumably one of the members considered in the numbers- 4 million or so.

So let's talk about the views of the NRA members. I write often about the fact that most of them support the same gun safety reform measures that I support. No wonder then, that the NRA is not a particularly popular organization. The leaders and lobbyists do not reflect the views of their own members. What they represent is the views of their own leaders. And take a look at these leaders while you are thinking about this. They are a fine bunch of upstanding citizens aren't they? And don't forget "law abiding" as well. ( tongue in cheek)

Since we know that most gun owners and NRA members are not afraid of common sense measures that won't affect them and will actually make us safer, why are our politicians afraid of them at election time? A minority of gun owners are those represented by the extremist thinking of the corporate gun lobby whose main job is to resist all measures that can prevent at least some of the shootings in our country. These are the folks who believe the dark view of the world and the deceptions about what people like me are all about.

Speaking of elections, let's talk about the money spent in the last one by the corporate gun lobby. They have always out spent the gun violence prevention groups though in this last election, we managed to hold our own. Take my own Congressional district for example. Opensecrets.org keeps track of this stuff. Here is their assessment of the race against Representative Rick Nolan. You can see that the NRA alone spent more than $1 million in this district alone. And they lost. Their ads and robo calls turned people off. Their own candidate was a one issue gun rights candidate. He lost. So much for the money spent against his opponent. Why politicians choose to be "lapdogs" for an organization that does not have a lot of public support and represents a very small group of Americans is beyond me.

According to the graphic on this post and other information, the NRA is less popular than ever. I wonder why? From this article by Cliff Schecter, writing for Daily Beast:


Nearly half of U.S. states have ballot initiatives, and an additional few that lack this particular direct democratic mechanism have referenda, which allows the people to overturn an act of their state legislature. So you could call this strategy portable (already there are signatures being gathered in Nevada, where state legislators passed a bill only to see it vetoed by their governor). Even in deep red, rural states, universal background checks enjoy overwhelming support. Perhaps this is why an NRA spokesperson told The Olympian newspaper in Washington, while apparently in the mood to over-share, “…we will have ballot initiatives like this one across the country… That is why we are so concerned.”

They should also be unsettled that just by sticking their heads up out of their holes and opposing something so popular as background checks, their numbers have plummeted. According to a new poll released by the Gun Truth Project, the NRA now only has a 38 percent approval rating nationally, and has seen a 20-point drop in favorability since just after Newtown, when Wayne LaPierre was going on live TV talking about arming just about anything organic. Nicely played, boys.

Something is changing about the public's awareness and attitudes towards efforts to stop shootings and prevent gun violence. Americans don't like all of the shootings. The conversation is moving away from the tired old false talking points used for years by the corporate gun lobby and their minions. "Guns don't kill people, people kill people." "If you take guns away from people, only criminals will have guns." "Only a good guy with a gun can stop a bad guy with a gun." "More guns make us safer." " A gun in the home for self defense will make your home safer." And more. The thing is, none of these are based on any facts or turn out to be true. Americans understand that guns actually do kill a whole lot of people in this country. They also understand that the reason criminals and others who shouldn't have guns get them anyway is because of our leaders' lack of backbone in doing the right thing to stop them from getting guns. As for only a good guy with a gun stopping a bad guy with a gun, that happens so rarely as to be almost a non starter. And even "good guys" with guns are shooting up schools, malls, their partners, and friends. We have more guns per person than any other civilized democratized country not at war so the public gets that the result is that we also have more gun deaths and injuries. And it is a minority of people who have guns in their home for self defense. The rest of us don't feel so paranoid and do things like have dogs, home security systems, phones to call for help and are careful about locking up our doors and windows.

I do admire the avid gun rights advocates with their single focus and their determination. I'm sure they believe as strongly in their views as I do. What I don't like or admire are the deceptions and the meanness that comes with the issue. When so many people are dying every day from something we can change it just doesn't make sense to oppose ways to change it. To sit back and let people die in such large numbers because of a right that is perceived by some to be "God given" or unfettered is disturbing at the least.

Reality tells us that we have a serious public health and safety problem in our country. Election results did not change that reality. In no other country does this occur. The gun lobby is a special interest group representing an industry that makes the weapons used to kill a lot of people. The fact that they take little or no responsibility in the solution to the problem of gun violence is shameful. But the same was true of the auto industry and the tobacco industry until laws were passed to make them responsible. Until that happens we can expect to see more of the same. In the meantime, we should think about what gun safety reform actually means. In future posts, I will be writing about ways to keep our families and community safe from gun injuries and deaths that are so devastating to so many. Stay tuned.

Mr. Wayne LaPierre, CEO of the NRA, has repeated his mantra that the next election will be the most important one of our time regarding our guns. It's the same old nonsense, fear and paranoia. From the article:

After the 2012 elections -- which featured astoundingly inept election spending by the NRA -- LaPierre saidof Democrats who support gun safety proposals, "I predict in 2014, when they are out on that plank, if they walk it with Obama, the American public and the NRA will saw it right off behind him and defend this freedom."
Now LaPierre is attempting to take credit for 2014, saying on the NRA's radio show that NRA supporters "changed the history of this country, it -- they provided the margin of victory, and I'll tell you, every American owes NRA members and gun owners a debt of gratitude."
There is no evidence for the claim that NRA supporters were responsible for the 2014 election outcomes. According to exit polling Americans' biggest concerns were the economy, health care, immigration, and terrorism/ISIS. When asked about "gun policies" -- which would presumably encompass both the NRA and gun safety advocates' agendas -- just one in ten voters selected it as one of their top two concerns.
While analyses are explaining the midterm outcomes in myriad ways, the big story about guns was not a victory for the NRA but rather the passage by Washington state voters of a ballot initiative that expanded background checks on gun sales.