In memory of my sister, James Brady and many others

While I was traveling, several anniversaries of shootings and other important events occurred. Gun deaths do not take a vacation.

Today is the day, 22 years ago, that I got the phone call telling me that my sister had been shot and killed by her estranged husband. The shooting happened on August 5th but my (at the time) brother-in-law sat in his house with two dead bodies apparently trying to decide what to do next. Shooting other human beings must be a terrible thing even for the shooter. How can one live with the idea that you have just brutally and inexplicably killed another person. He didn't live too long actually. Several months after the shooting, he killed himself. Shootings like this one and so many other domestic shootings happen quickly in moments of anger, rage, jealousy, depression, misunderstandings and other "reasons". When a gun is available to people in these states of mind, it is often used. The results are tragic and affect families all over America for the rest of their own lives. One does not "get over" the sudden and violent death of a loved one. This is why I have been involved in the gun violence prevention movement. My sister's death will always be with me. I don't want other families to feel this way. I can safely say that my sister would be proud of my efforts.

James Brady died on August 4th. You know the story, right? John Hinkley is another who should not have been able to get a gun. But he did. We had few processes in place to check to make sure gun buyers were not felons, adjudicated mentally ill, were who they said they were or domestic abusers to name a few. He bought his gun from a Dallas Pawn shop with a fake ID. From the article:

Brady was shot along with Reagan and D.C. police officer Thomas Delehanty on March 30, 1981, by John Hinkley, Jr. Hinkley used a .22 caliber revolver he had purchased at a Dallas pawnshop the prior year. Hinkley used an old driver's license and a false address, and did not disclose an arrest just four days prior for attempting to board an American Airlines fight with three other guns and loose ammunition. He also had a history of mental health issues.

After Brady’s shooting, he and his family argued a simple background check could have prevented the gun sale and its horrible after-effects.

In the first 15 years of the Brady law, 107 million background checks were performed, according to the U.S. Department of Justice [PDF]. Nearly 2 million firearms sales were stopped after the checks turned up violations.

The NRA has consistently opposed checks like those mandated under Brady.

Jim Brady was a hero. In spite of his terrible head injury, suffered in the shooting, he began a fight for common sense gun laws just knowing that at least some of our senseless gun deaths could be prevented by a simple background check on all buyers. He and his wife Sarah succeeded in getting the Brady Law passed in 1992 and enacted in 1993 resulting in millions of buyers being turned away at Federally Licensed Firearms Dealers. It was a hard fought battle over 6 years. But they got the job done. From this New York Times article:

Mr. Brady and his wife, Sarah, campaigned for a bill that Congress passed 12 years after the shooting. The Brady Handgun Violence Prevention Act, as it was known, ushered in background checks and waiting periods for many gun buyers. The Bradys also pressed for the restoration of a federal ban on assault weapons, which expired in 2004.

They issued statements calling for renewed restrictions after episodes like the school shooting in Newtown, Conn., in 2012. Last year, after Gov. Andrew M. Cuomo of New York pushed a gun-control bill through the state legislature, the Bradys appeared in a commercial thanking Mr. Cuomo for, as Mrs. Brady put it, “leading the way.” Mrs. Brady said they had been asked to record the commercial by Mr. Cuomo’s sister Maria Cuomo Cole, a friend of hers.

Mr. Brady returned to the White House occasionally. In 2011, he spoke briefly with President Obama — whom he endorsed in 2008 — on the 30th anniversary of the assassination attempt. Mr. Brady wore a blue bracelet with Representative Gabrielle Giffords’s name on it and told reporters that he had shown it to the president. Ms. Giffords had been wounded a few weeks earlier in a shooting in Tucson that left six people dead and 12 others wounded.

Mrs. Brady said that the president agreed with “everything that we are for,” but that he had told them the process in Washington took time. She said Mr. Brady had told the president, “It takes two years to make Minute Rice.”

After 32 people were killed in shootings at Virginia Tech in 2007, the Bradys supported a bill that closed a loophole that had allowed the gunman to buy weapons even though he had earlier been committed to a mental hospital. President George W. Bush signed the measure into law in January 2008.

When he was pressing for the Brady bill, Mr. Brady dismissed as “lamebrain nonsense” the National Rifle Association’s contention that a waiting period would inconvenience law-abiding people who had reason to buy a gun. The idea behind the waiting period was to give the seller time to check on whether the prospective purchaser had a criminal record or had lied in supplying information on the required documents.

Mr. Brady said that five business days was not too much to make purchasers wait. Every day, he once testified, “I need help getting out of bed, help taking a shower and help getting dressed, and — damn it — I need help going to the bathroom. I guess I’m paying for their ‘convenience.’ ”

I hear that word inconvenience used often when I talk about closing the loophole for private gun sales. It is definitely inconvenient to have been shot and live in a wheel chair for the rest of your life. I know more than a few people for whom this is ( and was) true. It was inconvenient to bury my sister. It has been inconvenient ever since for her family to be without their mother, sister, grandmother, aunt and friend. It's inconvenient to lose a loved one to a bullet(s). It is not inconvenient to get a simple background check for a gun purchase. It takes mere minutes unless one is on the list of prohibited purchasers. Those folks should be inconvenienced. And, of course, the 5 day waiting period for gun purchases disappeared after 5 years of the Brady Law's existence as a compromise in the original bill. One does need to ask what the hurry is when buying a gun. Sometimes my husband and I shop around for cars or mattresses or other furniture or desired items for days and weeks before we actually buy it. And then it may take a few days for delivery. A gun is designed to kill another human being. What's the rush? And the public agrees with me ( from the linked article to the Law Center to Prevent Gun Violence.)

Sarah and Jim Brady never stopped fighting for the gun safety reforms they knew would save more common sense. Her life has not been easy since the shooting of her husband but she never quit. The Bradys were and will remain examples of persistence for the millions of advocates working on preventing gun violence. Those of us involved in Brady/Million Mom March chapters do our work in their name. The Brady Campaign to Prevent Gun Violence is, of course, named for James Brady. We are not done with the job. We have much work to do as the shootings continue unabated. We understand that lives can be saved if we make the changes we all want and deserve to have in order to stop the devastation of gun violence to our families and communities. It is an honor to continue the work started by Jim and Sarah Brady. 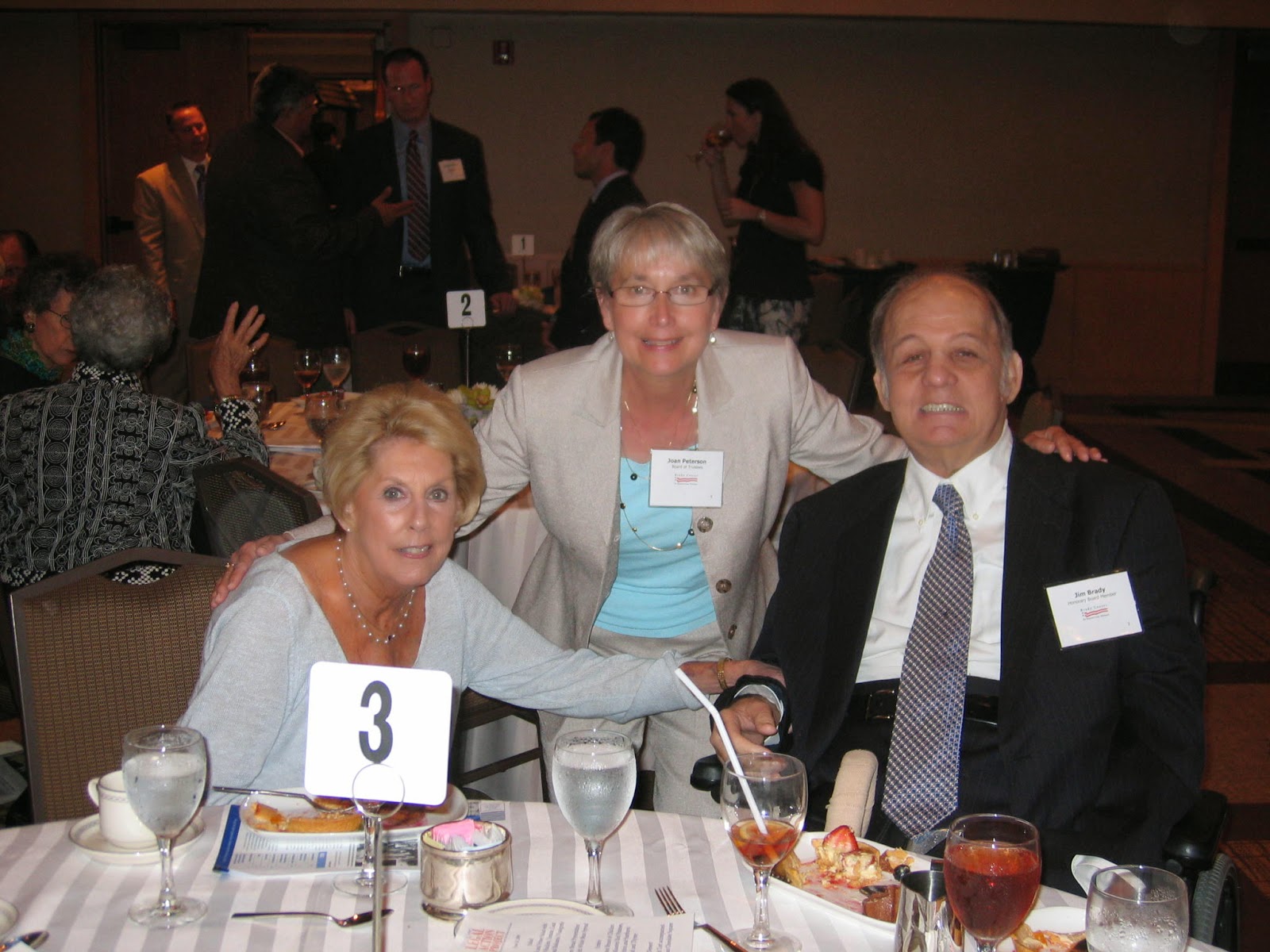 I met Jim Brady once at an event in Washington D.C. He was very engaging. His sharp wit was always in evidence in spite of what must have been daily pain and difficulties with his speech and movement. And I have come to know Sarah Brady as well as a fierce advocate, still, for saving lives through reasonable measures.

Congress needs to Finish The Job and make sure that all gun sales go through a background check. This simple measure would save lives. One has to ask how and why the corporate gun lobby can be against life saving measures. More people are asking.

Currently the NRA has issued a warning to Congress that they should not support a bill to keep guns away from domestic abusers and stalkers. Yes, you read that right. What is the matter with the corporate gun lobby? The question needs to be asked and answered over and over and over.

But I digress. These are the questions that Jim Brady and his brave wife Sarah asked Congress many years ago. If a law can't be passed after the heinous shooting that could have taken the life of President Ronald Reagan, when can we pass laws? Ronald Reagan supported the passage of the law. The law makes a lot of common sense of course but common sense is in short supply for the corporate gun lobby whose main mission it is to instill fear and paranoia amongst the gun extremists to keep them buying guns. Gun sales are the bottom line for these folks.

Moving on to another anniversary that I missed while traveling, the 2 year anniversary of the Sikh Temple shooting in Oak Park Wisconsin passed on August 5th. 6 were killed and 4 injured by someone who should not have had a gun. Sigh. Just another violent day in a country that has more gun violence than any other civilized democratized country not at war.

And I have read about many more awful shootings while I was away. There isn't room on this post to list them. But I will mention a shooting outside of a Texas bar where 6 were injured in a dispute involving guns and alcohol. Guns and alcohol don't mix. And of course, in what is becoming an epidemic of "accidental shootings, a 5 year old Colorado boy accessed a loaded gun he shouldn't have had and shot and badly injured a 3 year old. Guns and small children don't mix.

Because of shootings like that of my sister, James Brady and the many others that have occurred since, I urge Americans to get involved and make a loud noise to get Congress to do the right thing. We just can't continue along the road we are now traveling. In memory of those who have gone before us, let us get to work and keep our communities safe from gun violence.