Who needs a license? 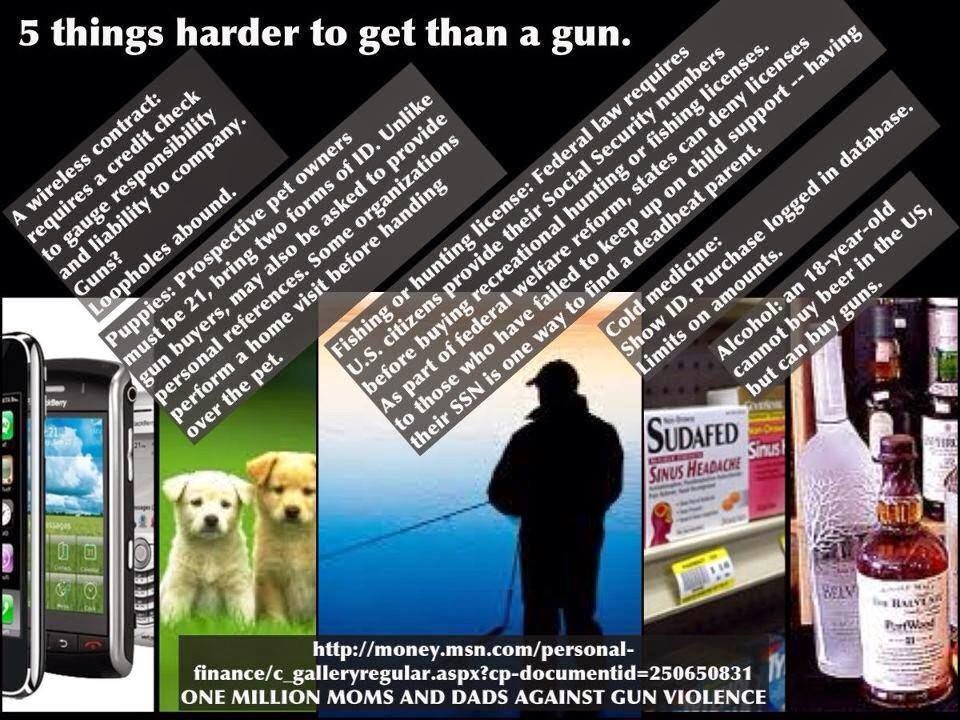 I ran across this article today in the Star Tribune. Isn't it interesting that dog and cat breeders will need licenses now because of problems with selling pets to buyers? In America a lot of sellers of items need licenses to sell their wares. Even people who buy certain items sometimes need background checks. Certainly people who provide services to other Americans are expected to be licensed and to have passed a background check themselves. As the image from One Million Moms and Dads Against Gun Violence shows, it's harder to adopt a pet, buy alcohol, Sudafed, cigarettes or even get a fishing license than it is to purchase a deadly weapon designed to kill another human being. Does this make common sense? But I digress. Let's look at more, from the article:

"That’s how it has always worked in Minnesota — irresponsible commercial breeders haven’t faced consequences unless someone reports them.

Now that has changed. As of Tuesday, Minnesota cat and dog breeders are required to register with the Minnesota Board of Animal Health. And starting next year, they will have to be licensed.

“We’re trying to be proactive,” said state Sen. John Marty, DFL-Roseville, who sponsored the Senate version of the bill.

It marks the first time Minnesota will have specific regulations for commercial cat and dog breeders. Most states have some degree of regulation in place, though about a dozen states have none, according to the American Society for the Prevention of Cruelty to Animals."

Interesting. In Minnesota one doesn't have to get a Brady background check to buy a gun through a private seller. So at gun shows, flea markets and on Internet sites like Armslist.com, anyone can buy a gun without going through a background check. In addition, in Minnesota, Federally Licensed Firearms dealers don't need to have a Minnesota license. There are federal requirements to sell guns as a licensed dealer however. Just as medical personnel most often need to pass national exams to maintain their licenses to practice medicine, they are also required to get a license to practice in the state where they will provide services. Lawyers also need a license to do business in the state where they provide services. These are precautions taken to make sure that those who are providing services or selling products are who they say they are and meet certain requirements for the protection of the public.

We know that guns are dangerous weapons designed to kill. Such is not the case for dogs and cats. Where is the concern about the sale of guns? Requiring, at the least, background checks on all gun sales will, indeed, make a difference to the use of guns in crimes and in shooting people. Take this incident in Alabama where 10 people were charged for illegal activity selling guns at a flea market:

George L. Beck Jr., the U.S. Attorney for the Middle District of Alabama, confirmed federal agents recently arrested 10 people on various illegal firearms charges in connection to an investigation launched by the federal bureau of Alcohol, Tobacco, Firearms and Explosives.

Federal court records show some of the offenses date back to October 2013 and others occurred as recently as March.

“We’re not targeting guns or people’s right to bear arms, but we’re trying to protect it,” Beck said. “It’s so that law-abiding citizens can own guns.”

Beck said there are several reasons why investigations into the illegal sale of firearms are important.

“It’s important because we have a Second Amendment that guarantees everybody the right to bear arms, but Congress has imposed certain rules that need to be followed in order to protect our Second Amendment right to bear arms,” Beck said. “One of those rules is a person is prohibited from knowingly selling a gun to a felon. That rule is important to protect the citizens because we don’t want guns to get into the hands of those who have committed serious crimes.”

Beck said another rule set by Congress included if someone chose to deal in firearms, or sell firearms for profit, then they’re required to be licensed.

“Don’t sell a gun to a known felon, and second don’t engage in the business of selling guns unless you’re a registered dealer,” Beck said. “Undercover agents found both of those rules to have been violated and that’s what brought these charges.”

“At least one of the defendants was also a convicted felon, which means he should not even have possessed a firearm,” Beck said.

Many problems here. If we had a system of background checks for all gun sales, these kinds of activities would have to stop. And the people who trafficked those guns and the people who bought those guns would have a harder time getting their guns. That would be a good thing. Strong gun laws matter. Take the "guns everywhere law" that just went into affect in Georgia today. From this article:


According to the Centre for American Progress, between 2001 and 2010, Georgia saw over twice as many people killed by guns than in combat in the Iraq and Afghanistan wars.

Right. Georgia is definitely not safer with more guns everywhere. Neither are the general public where the Open Carry folks insist on strutting around with their assault type rifles in restaurants and stores to make a stupid point about the second amendment. I have written about this many times in this blog. It's not working out so well for these folks. Can we say they are "shooting themselves in the foot?" Today, Minnesota based Target corporation asked that people not bring their loaded guns into their stores.  From this article:


Says Reed Epstein of the Wall Street Journal on Target asking “guests” not bring their guns in to shop for flip-flops and kiddie T-shirts. “Target Corp. on Wednesday said it would ask customers to no longer carry guns in its stores, bowing to a month-long pressure campaign. The U.S. department-store chain saidit would ‘respectfully request’ that customers not bring guns into its stores, ‘even in communities where it is permitted by law’. … ‘Our leadership team has been weighing this complex issue and been listening carefully to the nuances,’ [Target spokeswoman Molly Snyder] said. ‘Today, we shared our position with our team and, subsequently, our guests’." Public statements don’t much more densely “corporate” than that. (...)

Locally, Kavita Kumar says in the Strib, “Some gun rights activists emphasized though that Target is not banning guns. The ‘policy will have no practical impact,’ Gun Owners Civil Rights Alliance, a Minnesota group, said in a statement. It also said the mom’s group gets financial backing from Michael Bloomberg, the media billionaire and former New York mayor who campaigned for stiffer gun laws and started a group called Mayors Against Illegal Guns. ‘Target is trying to have it both ways,’ Joseph Olson, the group’s founder, said in the statement. ‘They want to stop Bloomberg’s social media attacks, but they don’t want to alienate millions of Target customers who legally carry, so they call it a ‘request,’ one that carries no enforcement.’ ”

Of course, the corporate gun lobby has no money for activities, lobbying, protests, influencing elections, advertising, and all of the other things they do! NOT TRUE. It's time for the gun lobbyists, leaders and extremists to stop whining about money and influence. The tables are turning and the public is fed up. Americans are saying they don't want loaded guns everywhere they go. They don't want to mix family meals at restaurants or shopping for shampoo with guys carrying assault rifles around. Someone needs to explain what is so dangerous between the book shelves at the local library that a loaded rifle is necessary to bring inside. It makes no common sense. How will we know if the guy with the assault rifle slung around his back strolling through the baby food aisle or sitting in the church pew means something sinister or is just acting like a fool?

We are not at war here in American the last time I checked. It's time for a change and the change is coming every day. Thanks to Everytown For Gun Safety for persevering in their efforts to get corporations to make statements not welcoming guns into their places of business. But it was our state legislators who were hounded and "convinced" to pass these stupid and dangerous laws in the first place. That is who we should be holding accountable for the current display of the American gun culture gone wrong. Surely we are better than this.

Just to punctuate the problems with the new Georgia guns everywhere law, two gun guys had an altercation in a public place on the first day of the new law:

A "misunderstanding" between two armed men in a Georgia convenience store led to an arrest on the very day that the state's new expansive gun rights law went into effect, according to The Valdosta Daily Times.

Valdosta Police Chief Brian Childress summed the incident up for the newspaper.

According to the Daily Times, the first man, Ronald Williams, approached the second man in the store and demanded to see his identification and firearms license. Williams also pulled his gun from his holster, without pointing it at the second man. The second man responded by saying that he was not obligated to show any permits or identification -- then he paid for his purchase, left the store, and called the police.

Police responded to the call around 3 p.m. Tuesday, and Williams was arrested on a charge of disorderly conduct for pulling his gun in the store.

You just can't make this stuff up.