Moving on after Aurora 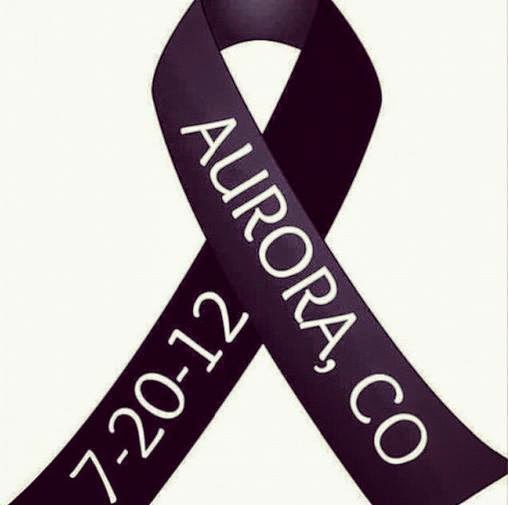 Today is the 2nd anniversary of one of our country's worst mass shooting. All shootings are bad, of course, leaving behind many survivors and victims. The Aurora, Colorado theater shooting took the lives of 12 and left 70 injured. It is a high profile example of all of the things that can go wrong when too many people have access to guns they shouldn't be able to have. I have been writing about things that can go wrong when the wrong people are able to get their hands on loaded guns. But it's not just the wrong ( prohibited buyers) who do bad things with guns and bullets. It's sometimes those who can legally buy guns who have no intent to kill anyone but do anyway in a moment of anger, depression, jealousy, during a relationship separation, after too much alcohol, or while believing, sometimes falsely, that another is out to harm them. Occasionally a shooting is justified to save one's life. But most of the shootings in America are not for that reason. The majority of gun deaths are among people who know each other( pg. 10)

A small group of American gun owners have been influenced by the ramped up fear and paranoia about gun confiscation or some sort of government take over of their rights to buy or own guns. They stockpile their guns and then wait for a chance to use them against their own government. Or they walk around the streets with their loaded guns openly carried to bully and intimidate other Americans. Some have so much hatred and vitriol towards those who just want to stop senseless shootings that they are willing to say anything to make their point. Some of these people aim their offensive comments at victims when they speak out. This unacceptable behavior speaks volumes about an American gun culture that has taken a turn away from hunting and recreational gun use. Victims represent the opposite of what the gun rights extremists believe- that more guns make us safer. And so attacks on victims is an attempt to turn the conversation on its' head and bring it back to the tired old false talking points we have been hearing for far too many years.

But victims and those in the gun violence prevention community are not standing down in the face of all of this. Instead, with all of the recent high profile mass shootings and attempts by the corporate gun lobby to loosen gun laws that are already too loose, we are speaking out. If that makes some nervous, so be it. America has more gun deaths per 100,000 than any civilized democratized country not at war. We are at war with ourselves. And for too many years we have let the gun lobby's voice be the loudest voice.  Even most gun owners side with those of us who just want a world where our loved ones don't get shot to death in elementary schools, shopping malls, movie theaters, military bases, bars, on the streets of our large cities, in gun suicides or in accidental gun discharges. We understand that there are people who believe that owning and carrying a gun makes them safer. So be it. But these folks also fight against measures to lessen the risks of loaded guns in homes and in public. That just doesn't make sense.

Our country is home to regularly occurring mass shootings. Sometimes the shooter in a mass shooting knows the victims, often not. According to the linked article:


Of the 143 guns possessed by the killers, more than three quarters were obtained legally. The arsenal included dozens of assault weapons and semi-automatic handguns with high-capacity magazines. (See charts below.) Just as Jeffrey Weise used a .40-caliber Glock to slaughter students in Red Lake, Minnesota, in 2005, so too did James Holmes, along with an AR-15 assault rifle, when blasting away at his victims in a darkened movie theater. In Newtown, Connecticut, Adam Lanza wielded a .223 Bushmaster semi-automatic assault rifle as he massacred 20 school children and six adults.

Two years ago today, Jessica Ghawi and 11 others were shot to death in a heinous shooting in a movie theater in Aurora, Colorado. I hate writing about these anniversaries because it always involves those left behind- those still grieving the loss of a loved one. Sandy Phillips is still grieving her daughter's death. But she is moving on and doing good things for others in memory of her daughter. This interview with Sandy finds her thinking about the anniversary and reflecting about the two years since she got the awful news.

I have met Sandy and know that she is making a difference. In a short time after the death of her daughter, she has traveled the country to support others in their grief after high profile shootings like Sandy Hook and the Santa Barbara shooting while working for the Brady Campaign to Prevent Gun Violence. She has supported the efforts of those working to strengthen gun laws in states all over the country. Sandy is mild mannered, gracious and unselfish in her support of others even while still in the midst of her own grief. She talked in this Texas news station interview about her resolve to work for common sense gun laws. What happened in Aurora revealed some disturbing evidence that our nation's loose gun laws allow for massacres like the one that happened at the Aurora theater two years ago. The shooter had mental illness. He was able to buy guns anyway. He got his ammunition- 100 round drum magazines- from a private seller on the Internet. Who needs 100 round drum magazines for anything reasonable regarding guns? For what purpose does someone buy this type of ammunition for personal use? To kill as many people as possible of course.

So what can we do to lessen the risk that innocent people like Jessica Ghawi and the many other victims of mass shootings and every day shootings don't get shot? Memorials are nice but they are not going to solve the problem of too much gun violence. Sometimes survivors feel a sense of peace and healing at memorials. But mostly they still grieve their losses and try to move on. Many become advocates for common sense gun measures. They never thought they would be where they are today speaking out against weak gun laws and cajoling reluctant politicians to do something about it. Becoming a survivor of a gun violence victim is life changing. I know that one for sure. So what can and do we do?

We can strengthen our background check system to make sure that everyone who purchases a gun should be able to own one. Congress just needs to Finish The Job which they could do if they weren't so afraid of the corporate gun lobby. We can educate the public about the risks of guns in the home and make sure guns are stored, locked up and unloaded to stop small children from getting their hands on them- teens and others from using them in gun suicides- and to keep thieves from stealing them. We can educate parents to ASK if there are loaded unsecured guns where their children play. We can require the reporting of lost and stolen guns. We can pass laws to limit that capacity of gun magazines so at least some lives can be spared in mass shootings. We can require background checks for all sales of high capacity gun magazines no matter where they are sold. We can look more closely at where gun ranges are located to prevent stray bullets from flying in neighborhoods. We can work with those in our urban neighborhoods about the consequences of so many guns and find out where the guns come from that are used in so many urban shootings. We can do more about gun trafficking to prevent so many guns from getting into the hands of those who shouldn't have them. We can deal better with the "bad apple" gun dealers who provide guns to those who shouldn't have them.

But what we must do most of all is to change the conversation and activate the majority of Americans who believe, like we do, that tolerating over 30,000 gun deaths a year is senseless. Putting our heads together to make a difference, to save lives and prevent the devastation to families and communities is what we are about. And, like Sandy Phillips, we will remember our loved ones, we will cry a little ( or a lot), and we will keep moving on with our work. 12 young Americans were killed on July 20, 2012 and 70 were injured. Their lives were taken suddenly and violently. America lost the potential of what all of the victims were and could have become. The families and survivors of all of the victims still grieve and still live on with physical and emotional injuries suffered that day. In memory of those who died: