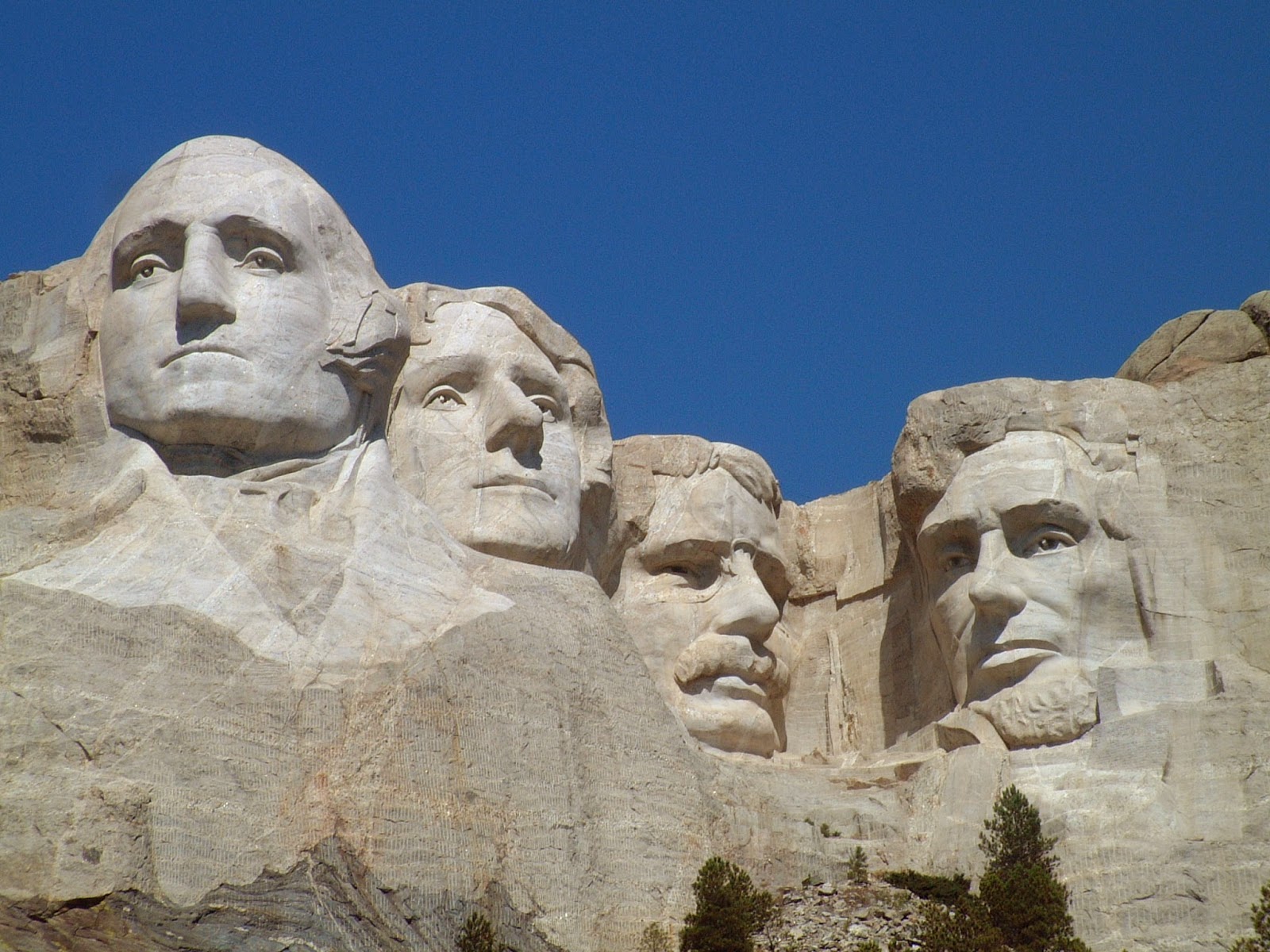 I am traveling with my family through South Dakota, mostly in the Black Hills, and on to Wyoming to Yellowstone and the Grand Tetons. I took this trip as a teen-ager with my own family and when our kids were younger we did get to see Mount Rushmore on our way out west. This time, grandchildren are also along so we will view it with somewhat different eyes. As I have done before, I am interested in the gun laws in the states through which I travel. So let's take a look at the summary from the Law Center to Prevent Gun Violence of South Dakota's gun laws.

From the linked article above:

Federal law requires federally licensed firearms dealers (but not private sellers) to initiate a background check on the purchaser prior to sale of a firearm. Federal law provides states with the option of serving as a state “point of contact” and conducting their own background checks using state, as well as federal, records and databases, or having the checks performed by the FBI using only the federalNational Instant Criminal Background Check System (“NICS”) database. (Note that state files are not always included in the federal database.)
South Dakota is not a point of contact state for the NICS. South Dakota has no law requiring firearms dealers to initiate background checks prior to transferring a firearm (although South Dakota does prohibit a dealer from selling a handgun unless the purchaser is personally known to the dealer or presents clear evidence of his or her identity1). As a result, in South Dakota, firearms dealers must initiate the background check required by federal law by contacting the FBI directly.2
South Dakota does not require private sellers (sellers who are not licensed dealers) to initiate a background check when transferring a firearm. (...) On March 19, 2012, the Governor of South Dakota vetoed a bill that would have allowed the carrying of concealed weapons without a permit.
South Dakota is a “shall issue” state, meaning that local law enforcement must issue a concealed weapons permit if the applicant meets certain qualifications. The sheriff of the county in which the applicant resides must issue a permit to carry a concealed weapon if the applicant:
Firearm Safety Training
South Dakota does not require applicants for a concealed weapons permit to undergo firearms safety training or demonstrate competence with a firearm.
Duration & Renewal
A permit to carry a concealed weapon is valid for four years.3 No provisions of South Dakota law specifically address the renewal of a permit.
Disclosure or Use of Information
South Dakota law prohibits any state agency, political subdivision, official, agent, or employee of any state agency or political subdivision, from knowingly keeping or causing to be kept any list, record, or registry of holders of permits to carry a concealed handgun.4 These entities also may not release or permit access to any application, list, record or registry of applicants or holders of concealed weapon permits except to law enforcement or the secretary of state.5
The prohibition against lists, records, and registries of permit holders does not apply to, inter alia: 1) permits to carry concealed handguns relating to any person who has been convicted of a felony; 2) any on-duty law enforcement officer while conducting routine verification of the validity of a permit to carry a concealed handgun; 3) the secretary of state for the issuance of concealed handgun permits and any access reasonably necessary to verify information with regard to specific permits individually; or 4) the preservation of the triplicate copy of the application for a permit by the authority issuing the permit.6
The prohibition also does not restrict any law enforcement officer in the performance of any official duty if the officer is in the immediate physical presence of a permit holder who has either presented a permit to the officer or declared to the officer that he or she is a permit holder.7
South Dakota law also prohibits any law enforcement officer from retaining any notes, data, or pieces of information related to the holders of permits to carry concealed handguns, unless that information is pertinent to a specific ongoing investigation or prosecution.8

South Dakota received a score of "F" on the 2013 scorecard from the Law Center to Prevent Gun Violence. From this article- new laws were passed to weaken gun regulations leading in part to this score:
This 2006 article claimed that South Dakota had the highest rate of conceal carry permit holders in the country. I suspect that is not the same now. There were some other interesting statements in this article:

Nationally, gun ownership can be linked to homicide and suicide rates. The link is tenuous at best in South Dakota, where actual ownership of guns far exceeds the number of permits granted.

Most guns don't even require permits - shotguns and rifles, for example - and a permit is required only for carrying a weapon on one's person or concealed in a vehicle. Unconcealed or unloaded handguns can be kept in a case or vehicle compartment without a permit, said South Dakota Attorney General Larry Long.

All firearm purchases are covered by national background checks.

There are many other measures of gun ownership, and a few other states lead South Dakota in those yardsticks.

In 2005, there were 50,768 FBI background checks for gun purchases in the state, making South Dakota fifth in per capita sales, behind Wyoming, Montana, West Virginia and Alaska. A 2002 survey found 60 percent of South Dakota's households have access to firearms, ranking it fourth in the nation.

Nor do the permit numbers mean that 40,000 state residents are always packing heat. Most of the permit holders contacted for this story said they rarely carry their gun on their person.

Instead, they have the permit primarily so they can legally carry it in their vehicle, take it target shooting with less hassle or skip the 48-hour waiting period on gun purchases.

For many Sioux Falls pistol owners, target shooting is all they do with their guns. They don't need a permit for that, but most say they have it just to be sure they're following the law.

South Dakota's hunting tradition is a major reason people here are comfortable with guns, and that extends to handguns, too.

A few hunters even use their pistols to hunt deer. Paulsen said he has tried it.

Scott Briggle, 43, a Sioux Falls truck driver, said he has taken one deer with his .357.

In the countryside, owners cite slightly different uses for their handguns.

"Well, like targets and also in the spring, the gophers, I like to shoot at them. They're pretty safe, but once in a while, I hit one," said Elden Garrett, 77, of Montrose. "I never thought of carrying it for protection."

John Blosmo, 60, of Bison says he also does a little hunting: "just varmints, whatever.

"I just carry it in the pickup, and I'm afraid that if it's in a case in a pickup, it's considered concealed," he said.

"I very seldom carry one, but I can if I want to," said Collin Leslie, a semi-retired farmer from Lemmon. He said he has lived near violence before, so he likes having it for protection.

"I was raised in California, and it was bad there."

I must admit to wondering if all permit holders carry their guns. This article seems to affirm my suspicion that they don't. And more from this article indicates the gun culture in South Dakota which may be typical of a state that is largely rural. From the article:


But in Sioux Falls or Bison or even Deadwood, guns are simply not as big a problem as in New York. Nor are they even the problem they are in the rural South.

In a 2002 CDC study, South Dakota ranked fourth in a survey of "gun prevalence" - the likelihood that a given household had a gun. Sixty percent of the state's households had access to a firearm; Wyoming was first at 63 percent, and Hawaii was last at 10 percent.

By contrast, when the telephone survey asked households with children whether they had a loaded and unlocked firearm, only 2 percent in South Dakota said yes.

That put the state 26th in unsafe gun prevalence, well behind Alabama and Arkansas, where about 7 percent of children apparently could gain access to a loaded, unlocked firearm.

South Dakota has in that sense left behind the lawless gun culture of the Old West and embraced the practicality of the Midwest.

Gun owners and officials say the rural hunting culture has fostered an ethic of safety and a desire to abide by the law, including the law governing concealed pistols.

The writer Calvin Trillin said the motto of the Midwest ought to be "No big deal." South Dakota makes a strong case for the idea that even a powerful tool like a handgun, with a dose of common sense and social responsibility, can be no big deal.

There just may be some common sense amongst South Dakota gun owners. Now let's look at gun deaths in South Dakota. From this article:


South Dakota was an anomaly. It had only two gun laws, yet its rate of 8.2 gun fatalities per 100,000 ranked below the national median of 9.9, according to the study.

Researchers tallied and scored the states on how many of 24 key gun regulations they had on their books, then split the states into four groups based on the number of laws they had enacted.

Though South Dakota has weak gun laws compared to other states, it has fewer gun deaths per 100,000 than other states. There was one attempt to politicize the issue of guns and link gun ownership to the health care law by conservative law makers:

A group of South Dakota lawmakers has introduced a bill that would require almost everyone in their state to buy a gun once they turn 21.

Turns out it's not a serious attempt. Rather, the lawmakers are trying to make a point about the new health care law -- that an individual mandate is unconstitutional, whether it requires everyone to buy health insurance or, in South Dakota's case, a firearm.

It didn't pass. South Dakota is not immune from accidental shootings of children by other children. This recent one was a 7 year old who shot and killed by his 9 year old brother:


Roth said the 9-year-old told investigators that he and his 7-year-old brother were playing with a handgun when he pulled the trigger, thinking the gun was not loaded, and unintentionally shot the 7-year-old.

It appears that the suicide rate in South Dakota is on the rise and the most frequently used method of suicide is a firearm.

The long and short of it is that South Dakota has fewer gun deaths than many other western/southern states. It appears to be a pretty safe state in which to travel. I'm sure we will enjoy our visit and be safe while traveling.