The buzz about gun violence prevention 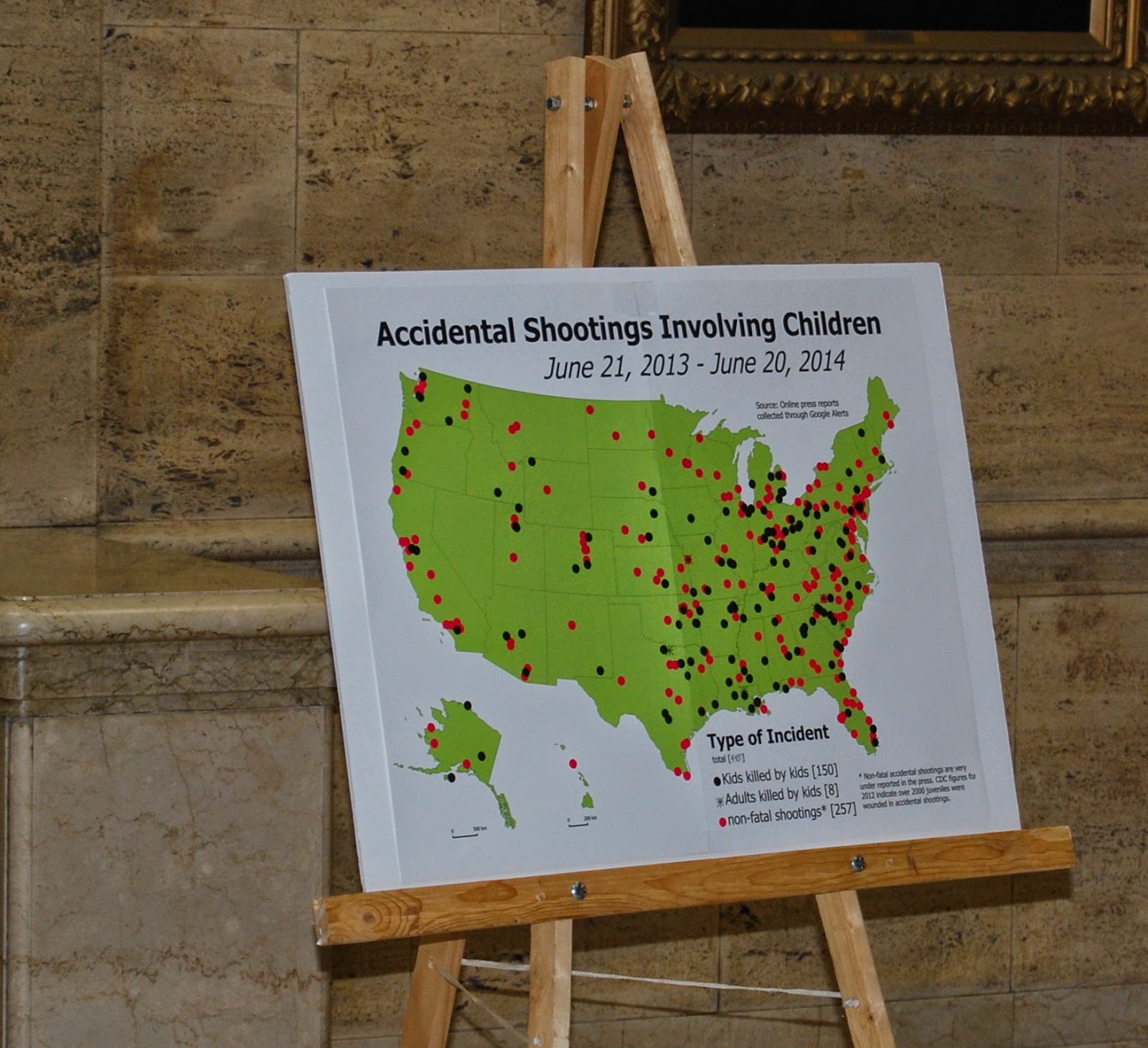 I've had an amazing week or so regarding gun violence prevention activities. So have a lot of other folks. It turns out that there is an increasingly loud buzz about preventing gun violence in America. With the last month or so filled with incidents of mass shootings, domestic shootings, shootings of police officers and accidental shootings of kids, it's not a surprise that the public is reaching a saturation point. It's hard to know where to begin since so much has been written and so much is going on. But let me start with the most recent first. It turns out that more children have been involved in accidental shooting deaths than has been reported. This new report from Everytown for Gun Safety confirms what a previous New York Times article discovered.  From the first linked article"


"Two children die almost every week in unintentional shootings — far more than government statistics show — according to a new study by Everytown for Gun Safety.

"If you don't have the right numbers, then you don't understand the scope of the problem and how to prevent it," Feinblatt says. "If fewer gun owners left their guns loaded and unlocked, fewer children would be killed."

The study found 100 unintentional deaths in 35 states across the country — 61% higher than the average number of unintentional gun deaths reported annually by the Centers for Disease Control and Prevention (CDC) from 2007 through 2011.

In most of the deaths, the shooter was a child playing with a gun."

This should be a serious wake-up call to parents, the medical community, gun owners, lawmakers and to all of us. Kids should not be exposed to loaded guns. Kids should not die from so many avoidable gun deaths. I wrote about this in my last post. We have a public health and safety epidemic in proportions not seen in any other civilized democratized country not at war. What are we doing about it? Almost nothing. Everytown's report, along with the New York Times reporting and the Brady Center's ASK campaign are pointing to strengthening safe storage laws and Child Access Prevention Laws. Cliff Schecter, writing for Daily Beast made these comments about this latest report in his column titled, "Why Parents Keep Shooting Their Kids":

What do all of these incidents have in common? The fact that guns are still treated like toys in this country—they are the only consumer product not regulated by the Consumer Product Safety Commission, a weapon that kills yet does not require the purchase any personal liability insurance. Even as the death toll from homicides, accidental killings and suicides continues apace, we are still allowing those who view this shameful blot on police blotters across America as an “unfortunate accident” to make our laws.

It is time for those who know these tragedies are largely preventable, between three-quarters and nine-tenths of us, to realize that we can change this culture just as we changed drunk driving from “oh shucks" to negligent homicide. We can start being the Non-Silent Majority to stop the boys-with-toys and gun-profiteer crowd from distorting a clear public policy imperative. (...)

Everytown’s new report and polling make this case in simple black and white. By collecting data over a year’s time, something the National Rifle Association has fought vehemently against the government doing lest its habitual lying about the relationship between guns and human tragedy be further exposed, they were able to discover that 61% more children are killed by guns than previously thought, based on federal data.

That 70% of these killings of our children are preventable simply by locking up guns in the home, keeping them stored separately from ammunition and taking a few other common sense precautions, takes this from the realm of simply disturbing to downright perverted.

In the polling Everytown did, it could not be any clearer. Well over eight in 10 people (86%), including over three-quarters of gun owners (77%), think “parents with guns in their homes should be required to keep them locked and unloaded.” Contra the NRA and its political hucksters such as Governor Rick Scott of Florida, nearly three-quarters of Americans (73%) and gun owners (72%) think doctors and teachers should be able to warn parents about safe storage of guns.

Perhaps most important, 82% of Americans and 81% of gun owners favor “allowing law enforcement to charge adult gun owners with a crime when a minor gains access to a negligently stored gun and death or serious injury occur.” Because if you leave your child in a hot car with the windows up or let them climb into a pool without adult supervision or they get their hands on your alcohol, you go to jail. It doesn’t make any sense for guns to be treated differently.

This is an issue almost everyone can support. So why aren't we doing something about it then? That is the big question that must be asked and it must be answered in order to save lives.

Thankfully there are many more groups and individuals doing the research required to make a difference about the causes and affects of gun violence. Thanks to Everytown for Gun Safety, the Brady Campaign, Coalition to Stop Gun Violence, Violence Policy Center, Law Center to Prevent Gun Violence, States United to Prevent Gun Violence, and others for their much needed work. The corporate gun lobby has kept Congress from adequately appropriating funds to the CDC for such research. Why? Because the outcomes just do not fit with their deceptive mantra that "more guns make us safer." Evidence and facts are important to the public policy discussion that we must have in order to save lives. The fact that we are not taking the issue of senseless and avoidable gun deaths seriously is a national tragedy.

And speaking of evidence and facts, I attended a summit at the William Mitchell Law School in St. Paul, Minnesota yesterday sponsored by the American Bar Association, the Hennepin and Ramsey County Attorney offices, and the Public Health Law Center Network for Public Health Law. It was more than educational and it was heard by a room packed with lawyers, physicians and advocates. The message was clear from all of the speakers, including St. Paul Mayor Chris Coleman; James Silkenat, President of the ABA; Jon Vernick, Johns Hopkins Center for Gun Policy and Research; Dr. Michael McGonigal, Trauma Services at Regions Hospital ( St. Paul); Prof. Darrell Miller, Duke University School of Law; Jon Lowy, Brady Center to Prevent Gun Violence, John Choi, Ramsey County Attorney; David Brown, Chief Deputy County Attorney for Hennepin County Attorney's Office and David Clark, Chair of the ABA Standing Committee on Gun Violence. Such wisdom in one room was amazing. You can check out the websites for these organizations and find lots more great information.

And what was the message? The corporate gun lobby has kept agencies from adequately doing the research necessary to deal with our gun violence epidemic. Gun violence numbers have remained about the same for the past decade- about 30,000-32,000 gun deaths per year.  Hospital trauma centers see too many gun violence victims. Gun violence is a public health epidemic. The second amendment does not mean that anyone should own a gun or everyone should carry one. The second amendment should not stand in the way of good public policy that will save lives. The Open Carry movement in Texas is pretty stupid. Since the Heller Supreme Court decision, more than 800 law suits have been decided in favor of common sense gun regulations. Straw purchasing is contributing greatly to crime gun access. Easy access to guns make suicide more effective and final. Domestic violence kills way too many women. Children should not have access to loaded guns. Universal background checks will save many lives. 40% of gun sales go without background checks. It is a Physician's job to talk about guns and gun safety with patients.  Mental health problems are real and we are not doing enough. Access to guns by those who are mentally ill is a huge problem in America. Other countries have mental illness but much less access to guns so very few shootings as a result.

I don't have to go on. You get the picture. It was all affirmed again and again and again by respected professionals and people who have done the research and the work to know that gun violence prevention is a priority issue for them. On Monday, as I wrote about in a previous post, we held an event at the Duluth City Hall where our Mayor declared June 23rd ASK day in Duluth. We had a map up ( see above) showing where the 100 or so accidental shootings of children had occurred in the last year. Minnesota has 4 dots on the map. Stunning. Speakers included a Physician and parent, the Deputy Police Chief and a faith leader. Their message was clear. We must stop the senseless and avoidable gun deaths and injuries due to children gaining access to loaded guns.

Last week, as I wrote about, I attended a summit in Washington DC about domestic violence and guns attended by about 100 advocates from around the country. The energy and intensity was palpable. No one can be against protecting women from violence, right? Others are attending trainings, writing articles, doing research, speaking at events, holding events, lobbying legislators and their Congress members and creating a real buzz about gun violence prevention. It's about time for this to happen. It's past time for way too many victims and survivors. And we are not going away. Instead, we are getting stronger and stronger. This article with interviews from victims and survivors highlights the resolve of those of us who have been affected by the devastating gun violence that is way too frequent in communities all over America.

I could write so much more because there is so much to write. But for now, I will end by saying that as the senseless shootings continue, as the gun rights extremists openly display their guns in public thinking they are making a point, as the public becomes more and more aware of what is really going on in America concerning guns and gun violence, there is hope that common sense will actually lead to public policy and changing the conversation about gun violence. This is a common national problem and it needs to be a focus of our attention. This is about lives and safe communities and our families. Let's get to work and make a difference. Please get involved with one or more of the above organizations to make a difference. That is what will make change happen.

As if to emphasize everything I have been writing on this blog, I found this article about a Pennsylvania woman who decided to open fire on some innocent children playing with squirt guns in their neighborhood:

A Reading woman put a group of children playing with toy squirt guns in harm's way when she pulled out a real gun and opened fire, police said.

Officers were dispatched shortly before 4:30 p.m. Sunday to the 1200 block of Green Street.

Residents of the block told police that four children were playing with squirt guns on the sidewalk when one of their neighbors, Billie Jo George, pulled out a real handgun and started pointing it at the kids, according to court documents.

One of the neighbors reacted by yelling to George, "What are you doing with a real gun! Why are you pointing it at my kids? They are only kids!" according to court documents.

The woman then ran inside her home and called police, and while inside, she said she heard a loud "pop."

Other witnesses told police that George, standing on her porch and pointing the gun at the street, fired a round.

Seriously. This must be from The Onion. But no, it's real life. Law abiding gun owners are making way too many mistakes with their loaded guns.