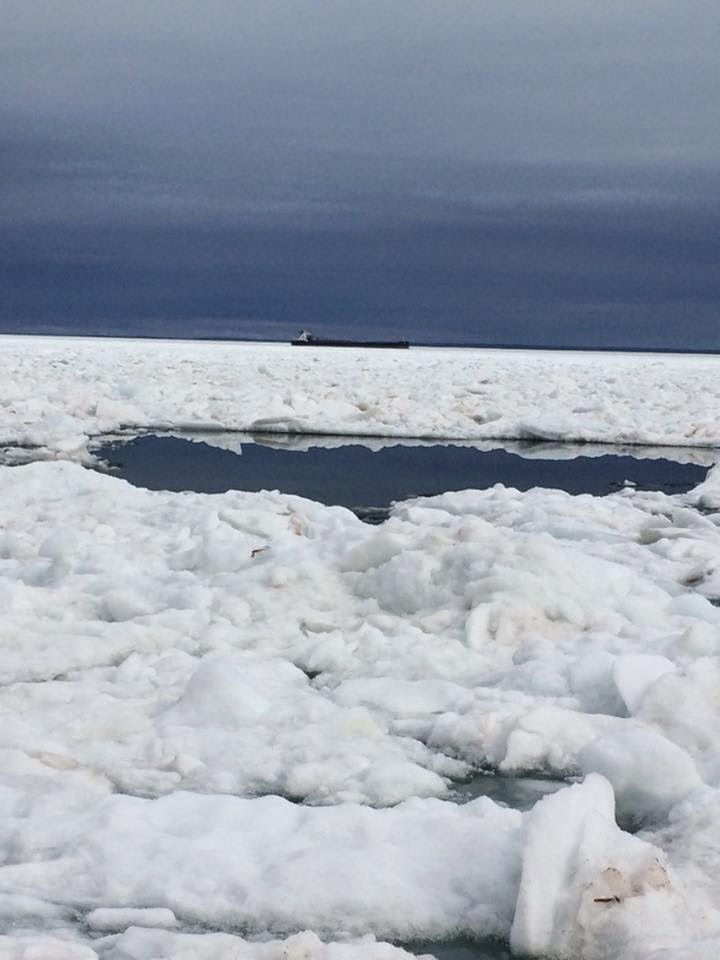 It's been another interesting week in Minnesota. For one thing, the ice has gone out on most of the inland lakes. Sadly, there is still some thick ice on the Duluth end of Lake Superior causing some problems for shipping traffic and generally wreaking havoc on the temperatures and the mood of the residents. Too many grey, cold and sometimes rainy days are not helping to bring leaves on the trees and the usual Crocus, Tulips and other early spring plants. We are aching for some spring growth and better weather. When the weather is good here, there is nothing like the beautiful view of Lake Superior with the sun shimmering on the water and people gathered in Canal Park and along Lake Superior enjoying the water and the attractions.

Sometimes getting anything done with gun policy is like a ship trying to navigate through ice. It's difficult and choppy. But there has been some good news here. On Monday of this week, the Minnesota Senate passed the bill to make sure domestic abusers and stalkers don't have guns. The bill passed 60-4. Last week the same bill passed out of the Minnesota House 111-15. What happened you might ask? I guess the legislators finally realized that it made a lot of common sense to protect women and families from the potential risks of guns in domestic disputes. The gun rights groups even negotiated in good faith to get the bill passed. Legislators who are typically opposed to any bill to strengthen gun laws found themselves on the same side of an issue as those who have long pushed for stronger gun laws. All good news for Minnesota. We are awaiting the signature of Governor Dayton who has apparently said he will sign the bill into law.

While all of this was good news, we know the bill is not perfect. Hopefully it will do what it is intended to do but it will need some monitoring to make sure that Minnesota families will be safer as a result. Meanwhile there have been several senseless shootings and gun incidents in Minnesota while all of the debate was going on. Just yesterday a kindergartner in the small town of Benson brought a gun to school:

A kindergartner brought a gun to school in Swift County Tuesday morning, and authorities are investigating now to find out how such a thing could have happened.

No one was hurt in the incident at Northside Elementary school and everyone -- from the other students to teachers to law enforcement -- acted quickly to get the gun away from the young child.

Around 8 a.m., students alerted a teacher that the child, who police say is about 5 years old, had brought a weapon into the school building. The teacher quickly confiscated the gun.

Benson Police Chief Ian Hodge said there is no reason to believe that the kindergartner intended to cause any harm, although police are withholding details -- including where the gun came from and whether it was loaded -- while the investigation is ongoing.

It doesn't take much imagination to know where the gun came from. As we say on the Kid Shootings blog, "Every gun in the hands of a child must first pass through the hands of an adult." Parents are responsible when this happens unless another adult made the gun accessible to the child. They were all lucky that something worse did not happen. Children should not be able to access guns. Guns are dangerous and need to be safely secured where little hands can't find them. Actual shootings of small children by other children are happening with more frequency according to news reports. This is the result of a gun culture gone wrong. When people are led to believe they have to have guns in the home for self defense, many do so. But the guns are more often used to shoot someone in the home or harm others than in self defense.

There was another senseless shooting in Minnesota- a neighborhood dispute over feeding deer. From the article:


Upset that his neighbor called the cops on his son and angry over a 15-year feud about them feeding deer, Neal C. Zumberge sprayed Jennifer Damerow Cleven and Todd G. Stevens with buckshot while his wife egged him on, according to charges filed Wednesday morning.

“Today’s charges detail what can only be described as a senseless and tragic fatal shooting in our community,” Ramsey County Attorney John Choi said in a written statement. “As this investigation is ongoing, we will let the complaint speak for itself at this time.”

Stevens, 46, was shot several times in the head, chest, abdomen and extremities, according to the complaint. He died at the scene. Damerow Cleven, 48, suffered two bullet wounds in the abdomen. She was treated at Hennepin County Medical Center and released Tuesday.

It's hard to know what to say here. I cannot even imagine someone shooting his neighbors while his wife is yelling at him to keep shooting. What kind of people are these? They have been in disputes with the people they shot and others in the neighborhood for years now. Clearly there are people who should not have guns. These are 2 of them. Now I don't like the deer walking through my yard either. It would be easy to shoot a few of them from my family room window. But of course, that can't be done legally and I wouldn't do it anyway. There's a deer hunting season and it happens in the woods. I don't like it when people feed the deer either. Deer are a regular nuisance in my yard and eat up my shrubs and flowers. We are shooing them away constantly. But really dear readers, this one is just a really bad example of a gun culture carried to the extreme. Neighborhood feuds should not end with a shooting death.

And then there was a domestic shooting last week. A woman shot a relative of her ex husband because she claimed she was in fear for her life. She was a legal gun permit holder.

And yet another domestic shooting in a nursing home,of all places, resulted in a murder/suicide:

An elderly man apparently shot his wife and then himself in her room at a nursing facility in Worthington, Minn.

Police were summoned to the Crossroads Care Center just before 10 p.m. Friday after staff members reported gunshots. In a private care room, officers found George Doust, 87, sitting on a bed with a self-inflicted gunshot wound to his head. His wife, Doris Doust, 86, was lying on an adjacent bed with a gunshot wound to her head. A handgun was in the room, according to police.

Doris Doust was a resident of the care center; George was a Worthington resident.

Clearly there are some people who shouldn't have guns- people with anger problems; people involved in domestic disputes- children and teens. ( I wrote about the Minnesota teen who brought guns to school with a plot to shoot up his family and his school in a previous post). And elderly people who might not be thinking clearly. Guns should not be the answer to "solving problems" or to take care of family or neighborhood disputes. But when a gun is available, it may and often does get used. It's so final. Guns are designed to kill and do a lot of damage. That is recognized. And yet, the corporate gun lobby pushes the idea that guns will make people safer. I would say that in Minnesota in the last few weeks, there is ample evidence that that is not true.

And related to guns, a Minnesota judge was reprimanded for giving a lighter sentence to a member of the National Guard for a crime because he knew it would mean the man would not be able to have firearms. The article does not mention the crime but if it would have meant the man wouldn't be able to get guns, it must have been a felony of some kind. This is not a good idea for obvious reasons. If the man shouldn't have guns he shouldn't have guns. There is no excuse for letting people who should not be able to have guns to have them anyway. That's how bad things happen in this country. When will we ever learn?

We have to be better than this. We can change and strengthen laws and we can change the conversation. In Minnesota we just did that for the safety of families in domestic disputes. But it's too late to change things for the family members and friends of the shootings and incidents I wrote about above. Let's put our heads together and decide that keeping our families safe from the gun violence that is so devastating to so many is a national public health and safety goal that we "shoot" for. It can be done. Let's get to work.

The shooting of a Minnesota couple over feeding deer is making the national news. From this Huffington Post article:

Neal Curtis Zumberge, 57, of New Brighton was charged with second-degree murder and second-degree attempted murder. Prosecutors say he killed his neighbor and wounded the man's girlfriend Monday after the girlfriend called police on Zumberge's adult son — who days earlier had allegedly accused the couple of giving Zumberge Lyme disease by feeding deer in their yard.

The criminal complaint says Zumberge shot the neighbors with a 12-gauge shotgun.

You can read more about what occurred in the hours before this shooting. Zumberge's son was arrested on Monday after a complaint from the wounded neighbor. Apparently some people believe they can settle disputes by shooting someone who has what appears to be a legitimate complaint. Anger and guns do not go together.

It's not a good idea to yell "keep shooting" at your husband while he is shooting two people. The wife of the shooter in the deer feeding incident has now been charged with murder as well. Where is common sense?
Posted by japete at 3:14 PM