The fierce and gentle love of Mothers 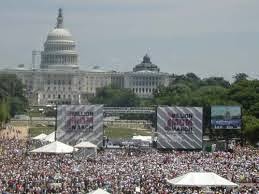 Today is Mother's Day. Everyone knows this, right? On this Mother's Day 14 years ago, I marched with hundreds of thousands of others for common sense gun legislation. This was the Million Mom March, of course. I never thought that today, in 2014,  I would still be advocating in the way I am doing so by being involved locally, state-wide and at a national level. Also, there's this blog.

Today, I was asked to speak at a Universalist Unitarian Church in my city about what it means to be a mother in the role of protecting her family. Here is what I wrote and spoke about:

"Hallmark would have us believe that mother's day is all about happiness, roses, candy and all good things. For most people that must be true. But for some, it is not.

On Mother's Day of 2000 I marched with 750,000 others in Washington D.C. to get Congress to act on common sense gun laws. There were mothers there who had lost children to gun violence. Several of those were from Duluth. Marree Seitz who usually sits in the pews here, was unable to attend but with us in spirit. It was in her sunroom that the Northland Million Mom March Chapter was born.

Why did I give up my Mother's Day with my family that year? Because my sister Barbara, mother to 3 living children ( one died before her) was shot and killed by her estranged husband in 1992 during a difficult divorce. She died before her own mother. That is not supposed to happen. But happen it did.

Mothers are supposed to keep their children safe from harm. We are sometimes called Mama Grizzly Bears ( by none other than Sarah Palin) or Mama Bears. We can be fierce as well as loving. And we can hurt as well as celebrate. My own mother lost her oldest daughter that day in August of 1992. How do you tell a mother that her daughter was shot and killed? That task was left to my husband and me. Nothing else could happen until the mother knew. But she was at her cabin on the Gunflint Trail ( a wilderness area in far Northeastern Minnesota) with a relative and it was evening. We waited until morning because we knew she would want to come right home. And because we waited there could be no release of the news because a mother is supposed to know when her daughter is murdered- before anyone else knows. My mother, bless her soul, was composed and in shock. It was later that she broke down- later, when it sank in that her first born child- a beautiful, talented, feisty and daring daughter- had died.

Mothers shouldn't have to view the bodies of their daughters before they are buried. No. This is not right. Marree and Bob Seitz know this all too well. If you know Mary and Don Streufert, the same was true for them. The same for the mother of Kay Marie Sisto- Shirley Sisto,of Duluth, who is celebrating only her 3rd Mother's Day without her daughter Kay who was shot by her husband as she was trying to get out of her marriage. We are walking in Kay's memory on May 31 at the Waterfront Trail to raise money for Domestic Abuse Intervention Program. The mother of April Oles Magdzas will be spending only her 4th Mother's Day without her daughter after she was murdered in her Superior home, along with her 13 month old daughter and unborn baby by a husband who suffered from PTSD.

The mothers of the twenty 6 and 7 year olds who were massacred at Sandy Hook are spending their 2nd Mother's Day without their children giving them cards, roses or kisses. Some of these mothers are speaking out now and asking for peaceful solutions to problems. The mother of Jessica Ghawi who was shot in the Aurora Theater shooting is spending her 2nd Mother's Day without her daughter. This mother is Sandy Phillips who has turned her sorrow into action- working for the Brady Campaign as a Victims and Survivors Advocate. There are too many mothers like Sandy, Shirley, Marree, and Mary. It doesn't have to be this way.

We need to mother to ourselves on this day. We are lucky. I am lucky. I am the mother of 2 and the grandmother of 4. I have had to spend the last several years mothering my daughter as she went through a very difficult divorce- something I didn't think I would have to do. But mothers do what mothers have to do. She is now a single mother, mothering as best she can with the help of not only her own parents but her extended family and many friends. And she is a great and strong mother. For that is what this is about. When situations require our mothering, we provide it. We are often the care givers to the children but we know that in today's world, that is not always true. Fathers are almost as often the primary care givers. And when both are working, everyone "mothers" the children.

As my aging mother became more dependent on me and others, I found myself mothering my own mother. Many of you have been there. I can only hope that my children will do the same for me. Pass it on. There is nothing like a mother's love. Mothers are special people.We all know that, right?

To be a mother is to give birth or to adopt,  to change diapers, to feed, clothe and bathe those precious children. To play with them, read to them, watch them grow into giving and caring adults in their own right. But we shouldn't have to lose them to a preventable death.

To be a mother or a parent is to keep your kids and those around them from harm. It is to teach about responsibility and be role models. How then to be the parents of the 5 year old Benson, Minnesota boy who brought a gun to school last week? How then to be the parents of the 17 year old Waseca boy who brought guns to school with a plot to kill his own parents and then shoot and blow up his own school? Where were the role models for the New Brighton, Minnesota man who shot and killed a neighbor and wounded his girlfriend over feeding deer? To be a parent is a heavy responsibility. Sometimes people need help with this task and we can all lend a hand.

All of this is why I am devoting myself to the prevention of the violence that took the life of my sister- a mother, an aunt, a sister and a daughter.

Happy Mother's Day. And may you find a passion that will put your own fierce and loving mothering skills to work for others. "

My friend and fellow Brady Campaign Board member, Heidi Yewman, wrote for the Oregonian today. She, too, was at the first Million Mom March in 2000. Heidi writes about the difference between the U.S. and the UK concerning guns and gun violence. From her OpEd:

When my kids head out the door to school, the thought crosses my mind: Is today another Columbine or Sandy Hook? Will I see them again? Is this the day my beautiful kids get slaughtered because a troubled kid can easily find a military-style weapon? My sister-in-law never worries about that.

It's not just me. A few days ago my teenage son said he's thought through an exit plan for each of his classrooms in case there's a shooting at his school. After he told me that, I just sat shocked, thinking, "Is this what it's come to?" My sister-in-law's son never had to think about an exit plan.

When my kids go to the movies or a mall or a park, I worry about them being shot - Aurora, Clackamas Town Center and the Sikh Temple in Wisconsin spring to my mind. My sister-in-law has no such worries.

Mother's Day is bittersweet for me. Since the 1999 slaughter at my high school, Columbine, I've spent a lot of time working to bring common sense to America's lacking gun laws. I have dozens of friends who cannot celebrate Mother's Day with their kids because their kids were killed with a gun. This is the real legacy of 300 million guns - 30,000 deaths a year.

My sister-in-law doesn't know anyone who's been shot dead because after a lone gunman killed 16 kids at Dunblane Primary School in 1996 the government essentially made private handgun ownership illegal in the U.K. (there have been no mass school shootings in the U.K. since). (...)

All I want is to send my kids to school or the movies or the mall without worrying that they'll be shot. This Mother's Day that's my wish: a safer country for my kids.

Today the Brady Campaign to Prevent Gun Violence is the home of the Million Mom March and Brady chapters, formed on Mothers' Day of 2000. We are strong. We are mothers and others who care deeply about preventing gun violence. Other mothers have joined in the cause with the formation of Moms Demand Action for Gunsense in America, now merged with Mayors Against Illegal Guns to be Every Town for Gun Safety.

Millions are still committed to this vital and important cause. And we know we can do better than what we now have in our country. Gun deaths and injuries are preventable and avoidable. It's time for a change. Let's get to work.