The blame game about the Fort Hood shooting 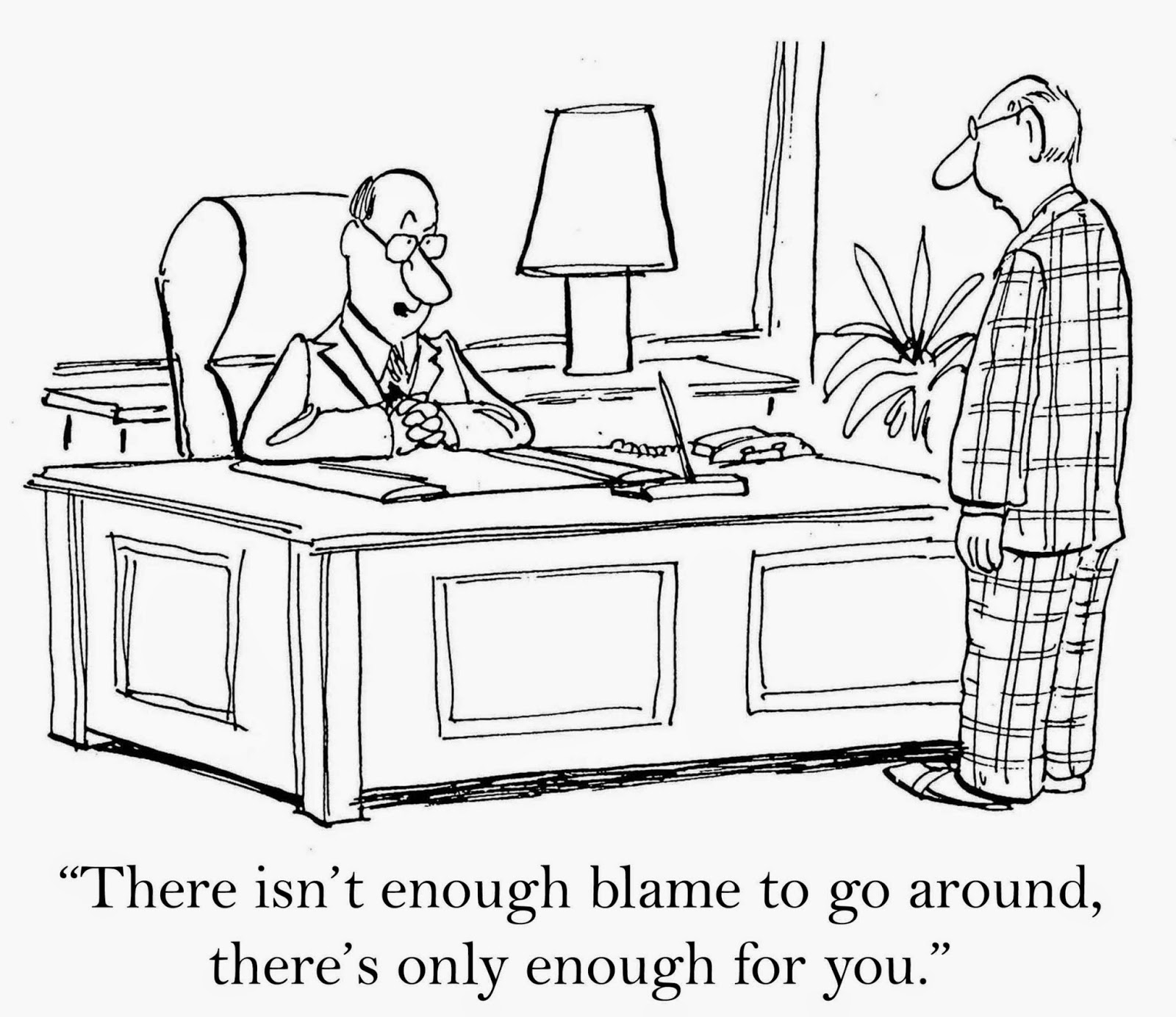 According to conservative Congressman Steve Stockman, the Fort Hood shooting is all the fault of "gun control activists". I guess that means me. I didn't realize that a shooting would become my fault for not wanting shootings to happen in the first place. Representative Stockman is always good for a great quote. From the article:

“Only the most out-of-touch radical would try to disarm soldiers,” said the Clear Lake Republican, who lost the U.S. Senate primary in March. “It’s time to repeal this deadly anti-gun law before it creates another mass killing. This is another tragedy created by anti-gun activists.”

Stockman introduced the Safe Military Bases Act last September, after a mass shooting at the Navy Yard in Washington, D.C., that left 12 people plus the gunman dead. Cosponsors include several Texas Republicans: Reps. Michael Burgess of Lewisville, Louie Gohmert of Tyler, Pete Olson of Sugar Land, and Randy Weber of Friendswood. The bill would would strike down laws passed in the 1990s that prohibit most service members from carrying weapons on base."

It's hard to know what to say so I guess I'll just leave it here for you to digest.

Let's talk about some facts should we? Yesterday this "out-of-touch radical" wrote that some early reports suggested that the Fort Hood shooter had been in an argument with others on the base right before he started his shooting rampage. Also it turns out that he had not served in a combat role while in Iraq nor had he suffered any injuries while there or at any time while serving. This article explores that more. From the article:

The man who gunned down three fellow soldiers at Fort Hood and wounded several others before killing himself suffered from mental illness and may have argued with other soldiers before the rampage, the base's commander said Thursday.

The shooter in Wednesday's attack -- which occurred at the same Texas military facility where an Army psychiatrist embarked on a massacre in 2009 -- was identified as Spc. Ivan. Lopez, 34, originally from Puerto Rico.

Lt. Gen. Mark Milley, the senior officer on bsae, told reporters there is a "strong possibility" that Lopez had argued with one or more comrades before he opened fire, killing three people and wounding more than dozen others before taking his own life.

"There may have been a verbal altercation with another solider or soldiers and there is a strong possibility that may have immediately preceded the shooting," Milley said.

The general did not say what sort of dispute may have occurred, and he said there was no evidence that Lopez deliberately targeted his victims.

Lopez's unstable mental health is believed to be the underlying cause of the attack, Milley said. The general said Wednesday night that shooter had been undergoing treatment for depression and anxiety and was taking medication, including the sleep aid Ambien.

Although no diagnosis had been made, Lopez was also being evaluated to determine whether he had post-traumatic stress disorder, Milley said.

Investigators have also been told that Lopez may have been upset because the Army had refused to grant him personal leave, CBS News has learned. A family spokesman in Puerto Rico told The Associated Press that Lopez had been upset when he was granted only two days' leave to attend the funeral of his mother, who died of a heart attack in November.

An Iraq war veteran, Lopez claimed that he had suffered a traumatic head injury. If he did sustain such an injury, it was not in combat.

Arguments should not end in mass shootings but often they do. And, from the article, the shooter purchased his gun on March 1 and was apparently a legal gun owner. So now where do we go with the conversation about mass shootings in America?

This morning on MSNBC's Jansing and Company gun rights advocate and discredited John Lott showed up to talk about why it's so important to arm people on bases and other places to stop these mass shooters. Lott wrote a piece, linked above, explaining his rationale. A retired Colonel took the opposite view and said that no responsible commander would want to arm base personnel. Here is an article about the show that I watched and the video, below:

Why should anyone listen to John Lott? His ideas have been found to be false and he has been discredited long ago. I am willing to bet that the public is not on Lott's side. Remember, it is a small minority of Americans who have permits to carry guns- maybe 4% or so give or take. So to think that one of them will just happen to be at the site of the next mass shooting to stop a shooter or prevent a shooting? What are the chances of that happening? Very slim. But of course, what they want is to make sure a lot more folks get their permits to carry loaded guns with them everywhere they go. This is one way to push that idea. And when someone with a permit has happened to have been at a mass shooting, such as this one in Tucson after Jared Loughner had been wrestled to the ground by citizens, he realized that he might have shot the wrong person in the chaos of the moment. Of course. What they are ignoring is that some permit holders are not responsible gun owners and some law abiding gun owners are irresponsible. Check it out here and here.

This is the same old movie played by the gun rights advocates and the corporate gun lobby. They continue to say that more guns would make us safer when the opposite has been true for many many years. Their specious claims need to be challenged publicly and soundly. Continued high profile mass shootings seem to bring out the ludicrous reasoning of the gun lobby and their followers. But maybe this time, we aren't buying it. I am just wondering which mass shooting will be the one to change the hearts and minds of our elected leaders.

When even some Republicans acknowledge that we need to deal with those with severe mental illness and access go guns, then maybe we are getting somewhere. This article quotes House Speaker John Boehner on the subject and also explores the complications of discussing guns and mental illness. But the conversation needs to continue. From the article:

Of course, not everyone is silent when it com it comes to keeping guns away from the mentally ill — more than a few Republicans threw their weight behind the notion Thursday, including Speaker John Boehner (R-Ohio.)

“It’s no question that those with mental health issues should be prevented from owning weapons,” he said Thursday. “This is an issue we need to continue to look at.”

Sen. Marco Rubio (R-Fla.) agreed but acknowledged that it’s a bit taboo to talk about.

“It’s a complicated issue… but idea that people who are dangerously mentally ill should not have access to weapons, I don’t think that’s a controversial position,” he said. “I think what’s controversial is how do you apply that without violating people’s second amendment rights.”

A film of "good guys" with guns must be looping in the heads of those who believe the carnage is my fault. They must see themselves with their gun, finger on the trigger, heart racing, zeroing in on a "bad guy" and hitting the mark to save the day. They will, of course, know exactly who that "bad guy" is. They will, of course, shoot the right person and they will, of course, kill that person. They are espousing the idea that shooters look for "gun free" zones to carry out their acts of mayhem and murder. Never mind that the Fort Hood shooter had to know that there are armed military police and security guards on our military bases. They are not "gun free zones". The argument just doesn't work when we actually deal with the facts. So the idea that we must make every place in America a "loaded guns allowed" zone is not true.

Another ludicrous idea coming from the gun lobby is to just stop following the laws that are already on the books. In Missouri, the gun lobby managed to get the legislature to support a bill to nullify federal gun laws. Great idea, right? From the article:


Missouri, which is home to the Council of Conservative Citizens and Sovereign Citizen Movement as well as hosting way too many right wing extremist attacks just passed a bill in the House that nullifies all federal gun laws in their state. You may remember when The Missouri State Highway Patrol released a report called The Modern Militia Movement, documenting the extremist problems in their state and the typical backlash politics that followed? And it's usually law enforcement that feels the brunt of the violence. Are Conservatives just trying to arm all the lunatics in Missouri?

Yes, apparently. Since Missouri decided to overturn the state law that required people who want to buy a handgun to get a background check for the permit to purchase that gun, gun deaths have increased in their state:

Universal background checks before gun purchases can have an enormous impact on reducing firearm-related deaths, according to testimony presented before the U.S. Senate Judiciary Committee this week.

While gun rights lobbyists, led by the National Rifle Association, claim criminal background checks before all purchases are impractical and unnecessary, research from the Johns Hopkins Center for Gun Policy and Research found that strict guidelines may actually reduce gun-related homicides.

Missouri, the site of President Barack Obama’s recent gun control speech, had a firm “permit-to-purchase” law in place until 2007, when it was repealed. The law -- which both the Missouri Sport Shooting Association and NRA helped overturn -- required Missouri residents to obtain a sheriff’s permit before purchasing a concealable weapon.

“Preliminary evidence suggests that the increase in the diversion of guns to criminals linked to the law’s repeal may have translated into increases in homicides committed with firearms,” Webster said in his written testimony to the Senate. “From 1999 through 2007, Missouri’s age-adjusted homicide rate was relatively stable, fluctuating around a mean of 4.66 per 100,000 population per year. In 2008, the first full year after the permit-to-purchase licensing law was repealed, the age-adjusted firearm homicide rate in Missouri increased sharply to 6.23 per 100,000 population, a 34 percent increase. For the post-repeal period of 2008-2010, the mean annual age-adjusted firearm homicide rate was 5.82, 25 percent above the pre-repeal mean.”

Webster also said those changes were inconsistent with the national firearm homicide rate, which reportedly dropped 10 percent during that 2008 to 2010 period.

Laws matter. But never mind. The Missouri House members, obviously bought and paid for by the corporate gun lobby, want to rid the requirement to also have a background check when purchasing from a federally licensed firearms dealer. Yes, you read that right. For that is a federal law that would be nullified if the nullification bill would be signed into law. Anything goes in this gun rights film, now showing in legislatures all over the country. Given what happened in Missouri when they overturned the state law, I can't wait to see what happens next in this ludicrous and dangerous film.

Meanwhile the real film, showing every day in America, is of the carnage of so many dead and injured. Just check out the latest Gun Report by Joe Nocera of the New York Times if you don't believe me. He ends every report with this statement (which changes every time of course):

What we need in this country is a very serious national conversation about the causes and effects of gun violence based on the facts. We won't have it as long as people like John Lott and Congressman Stockman deny the idea that guns actually cause a lot of violence in this country. Where is common sense?
Posted by japete at 12:22 PM