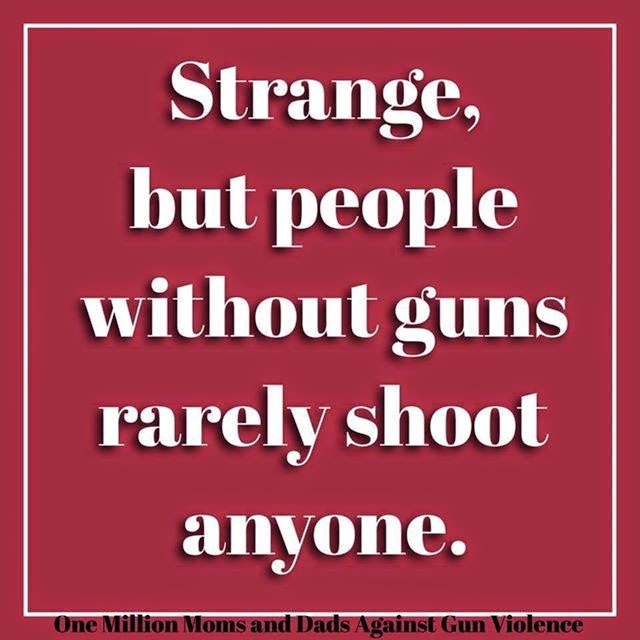 Another one of the gun lobby myths is that shootings only happen in gun free zones. Of course that is because they must convince our elected leaders to allow them to carry their guns everywhere to protect people in all of those gun free zones from shooters. Shooters, as we know, stop to read the signs posted outside of schools, hospitals, malls and other places where some states allow signs banning guns inside. They read the signs, think to themselves that this place doesn't have anyone with a gun inside. And then surely no one will shoot back at him/her and he/she will be able to shoot up a bunch of people unimpeded. All of this in a split second's time. Except for when they don't read the signs or stop to think about what they are doing before they start shooting. This incident, for example, happened in a police station. I think we can all agree that police stations are not gun free zones. From the article:

The shooter walked into the lobby of the West Traffic Division at about 8 p.m. local time and told two officers at the desk that he had a complaint, then pulled a semi-automatic handgun and fired repeatedly at one of the officers, Los Angeles police officials said on Tuesday.

The officer, a seven-year veteran, fired back, as did his partner, a policewoman with four years on the force, striking the gunman multiple times, police Commander Andrew Smith said.

Yup. Maybe this guy should have thought about all of those armed people inside before entering a police station with his guns. The reality is that people bent on shooting someone don't stop to think whether there are guns inside or not. And, as my readers know, there have been shootings of police officers in communities all over America. They happen regularly. Officers of the law are armed in America. Don't shooters know that? Of course they do. Then why do they go ahead and shoot anyway? Why don't they go down the street to a gun free zone? Like maybe a home where people have guns to protect themselves.

Oh right. How will a shooter know whether a homeowner has a gun or not? They don't. But sometimes they enter homes anyway and sometimes someone gets shot. Sometimes. Most of the time, home intruders enter homes during the day when no one is home. Maybe that's because they don't want to confront someone, armed or not. I don't believe for one minute that whether there is a gun inside or not makes one bit of difference to a shooter.

So what is this myth that gets taken for reality? It's just that- a myth. The corporate gun lobby is fooling us into thinking we all must be armed and that no place should be a gun free zone. They are wrong. It is the guns allowed zones where many of the shootings happen. States all over the country are rushing to loosen gun laws to make sure there are few, if any, gun free zones. Kansas as just one of the most recent examples.

In the latest Gun Report by Joe Nocera of the New York Times, there is a forward to the list of the latest shootings about the new Kansas law. From the article:

With just one signature, it will be legal to openly carry firearms in Kansas, nullifying city and county gun regulations across the state.

The legislature voted on Saturday to send an open carry bill to Gov. Sam Brownback, and it’s a good bet he will sign it. The National Rifle Association considers the measure a nationwide model for stripping local officials of their power to enact restrictions on the sale of firearms and impose rules on how guns must be stored and transported. Existing ordinances would be erased, and tax dollars could not be used to finance gun buybacks.

“The gun lobby likes to prevent people who believe in sensible gun laws from having a say in protecting their own communities,” Jonathan Lowry, director of the Brady Center to Prevent Gun Violence, told the Associated Press. “It’s cynical, and it’s dangerous public policy.”

And then the report goes on to list the latest shootings. By my count, 35 were injured, 17 killed, 6 children were victims of injuries or death in 19 states in just a few days. There was one stray bullet incident, a couple of accidental shootings, a couple of domestic shootings, some random shootings, and almost all in guns allowed zones. I say this because homes can be assumed to be guns allowed zones. Also cars in states that have conceal and carry laws. Yards? Not sure about that one but since it's legal to carry wherever you go in many states, yards and streets can be assumed to be guns allowed zones. The one man found dead near an elementary school? That could be a gun free zone.

So you see what I mean? Where's the logic behind saying that most shootings happen in gun free zones? I'm afraid there is none. So the next time you hear someone try this bit of "logic" please challenge them. They are not telling the truth. The truth is in the numbers. We are the most heavily civilian armed country not at war in the world. We also have the great distinction of having the most gun deaths per capita than any industrialized country not at war. Coincidence? I don't think so. In countries where most of the public ( and even private) spaces are gun free, the result is very few shootings.

It's time to change the conversation about guns and gun violence in America. What we have now is clearly not working. Are you ready to join me? Let's get to work and ask our leaders to stop listening to the deceptive "logic" coming from the corporate gun lobby. For once that happens, they will be free to support public health and safety measures that will save lives and keep our communities free from the gun violence that is so devastating. Common sense measures to keep us safe from gun violence can save lives. In the end, it doesn't matter whether shootings happen in gun free zones or guns allowed zones. That argument deflects from the main problem- that there are just plain too many shootings in America. And more guns will not solve that problem.

Are gun shows and other places where NRA and other gun rights group members gather gun free zones? I'm just wondering. Personal guns are not allowed inside of gun shows. So that would make gun shows, oddly, gun free zones. What about NRA conventions? They are gun free zones as it turns out. Go figure. I thought these folks advocated for guns everywhere. Why not inside of their own convention? Aren't they worried that someone will know it's a gun free zone and start a shooting spree? I'm just asking. And then this NRA event where a man accidentally shot himself in the leg with his own gun:


Yesterday a man apparently accidentally shot himself at an NRA and police sponsored event outside Bethlehem Pa. Sarah M. Wojcik of The Express-Times in Easton reports that a “New Jersey man participating in a program at the Steel City Gun Club [in Bethlehem, Pa] was injured…when he accidentally shot his own leg.”  Even more interesting is the fact that The Express-Times says the man was there “as part of a program put on by the National Rifle Association and hosted in part by the Bethlehem Police.”

Ah. It was at a local gun club where guns are allowed. In fact, though, there have been a number of accidental shootings and even suicides at gun (shooting) clubs. I guess it doesn't matter if there are guns allowed or not. People get shot just about everywhere. And when guns are allowed, we can see that people are not necessarily safer.
Posted by japete at 7:22 AM