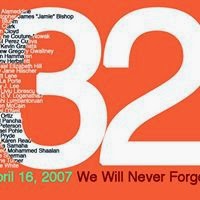 Once again, the Virginia Tech shooting anniversary is here. It has happened every year since 2007 when we first heard of the heinous shooting of 32 people on the Virginia campus. We know that the shooter had serious mental illness and his name should have been on the list of people who can't buy guns from federally licensed dealers. But it wasn't. After the shooting, a federal law was passed to make sure the names of people who have mental health histories get to the FBI's date base so licensed dealers will know not to sell them guns. From this article:

Despite the huge increase in the number of individuals identified in NICS, records of many individuals prohibited from possessing firearms because of their mental health histories are still missing from the database. The greatest gains in the numbers of state records submitted to NICS largely reflect the efforts of a small minority of states,12 and as of May 2013, 15 states had still submitted less than 100 records each.13

Although some states have cited a concern for privacy as a reason that records have not been submitted to NICS, the mental health records submitted to NICS only identify the individuals through names, birth dates and similar data, and include no clinical information.17 In addition, as described below, access to information in NICS is tightly controlled."

Here is more about the 2007 law (from the article above):

According to the Government Accountability Office, 15 states received NICS Act grants during at least one fiscal year from 2009-2011.31

Of course, as I say often on this blog, until we pass a law requiring background checks on all gun sales so that those who fall into the category of "adjudicated mentally ill" don't get a gun through a private seller where no background check is required, we will not have "finished the job" concerning our background check system. We can make it harder instead of easier for shooters like Cho and others who would do people grievous harm to get guns. And why not? Inconvenient? Maybe a little bit. But if your son or daughter or mother or father or aunt or uncle or good friend was one of the 32 shot to death on April 16, 2007, you would know what inconvenience is. And for the wounded, the memories are still vivid.

Families never forget these anniversaries. The sister of one of the victims, Emma Goddard, writes here about that day 7 years ago now when she heard the news that her brother, Colin, had been shot in the rampage. This is a story of a family and a young man with the courage to carry on. They work hard for the reforms that can make our country safer from the gun violence that so affected them on that day. I know Colin and his dad, Andrew. They are both amazing men- inspiring, intelligent, committed, both with an engaging sense of humor and with the common sense to know that we can prevent the next shooting if we try hard enough. Emma tells this story with the grace and dignity I would expect from their family. Stories are important but only in America do we have so many stories to tell. Every day there are more stories of people whose lives had significance. Because of a senseless shooting, we have lost the potential for the victims to achieve their dreams, to become an artist, a singer, a physician, a scientist, an athlete, an engineer, a mother, a father, a grandmother, a minister, a good friend.......

So on this day, we remember the 32 who died on that day 7 years ago. The linked website is dedicated to the memories of the 32 who died that day. You can see their names and read more about each victim. There are 32 stories here with all of the families and friends of those who miss them and still grieve for them. Gun violence affects communities all over America. The ripple effect with each shooting extends beyond those closely affected to the many others who knew them, or a family member, or lived on campus and experienced the chaos of that day, or who was injured that day, or lived and live in Blacksburg, Virginia, or who have dedicated their lives to changing our gun culture so others will be safer. Every year, we experience anniversary after anniversary without making the changes we need to make. Every year, our elected leaders let more shootings and more shooting anniversaries pass with no action. It's time for that to change. Let's get to work in memory of those whose lives are lost every day.

We will not forget: