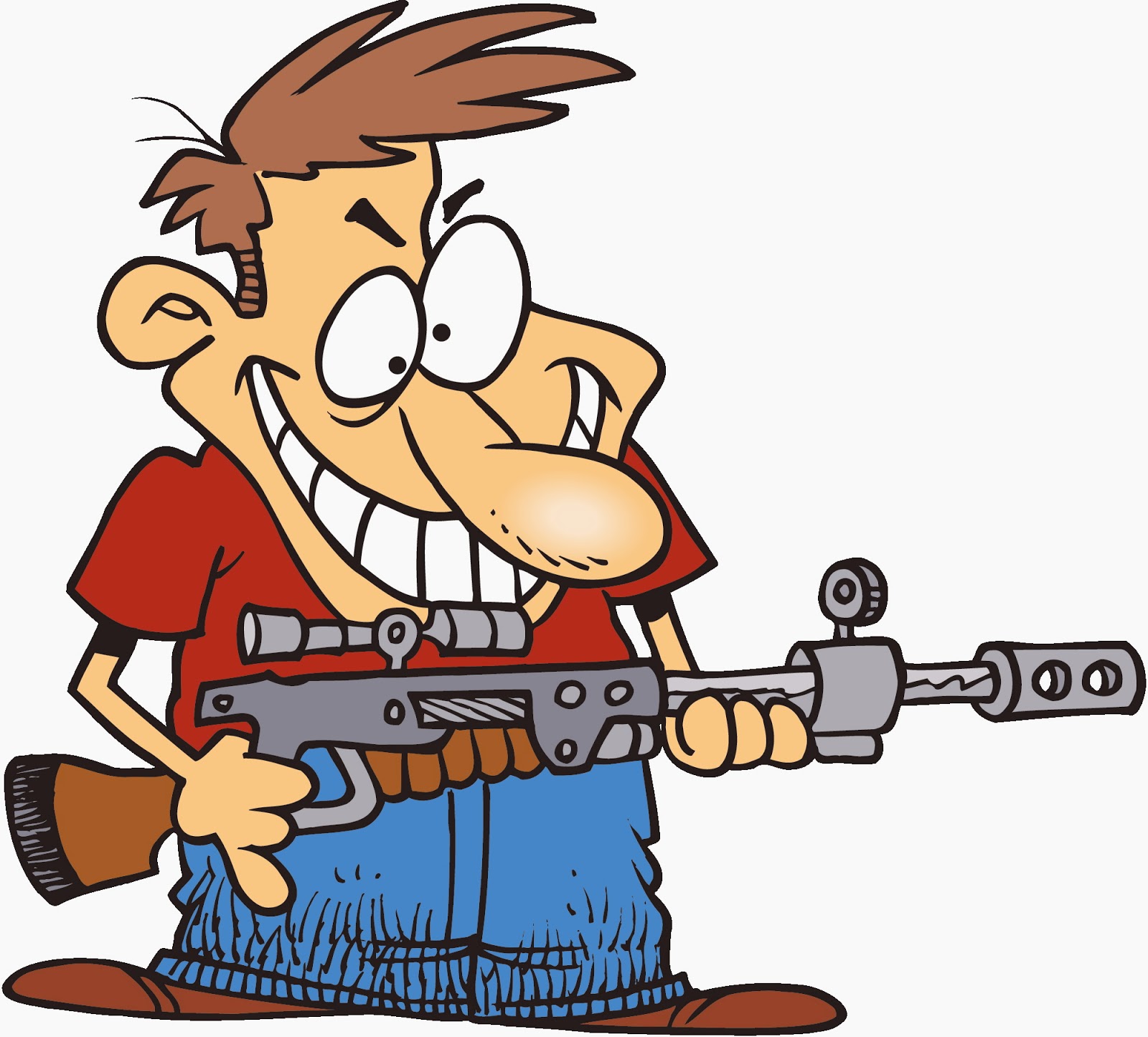 I will start this with the latest Week-end Gun Report compiled by New York Times writer Joe Nocera. Nocera is unwavering in his reporting of gun incidents all over America. This one includes, as always, incidents of homicide, near misses, injuries, domestic shootings, children finding guns and killing themselves or others and other insanity. Check it out. It should matter to you and others that this is happening daily in our country.

In other insanity, why not lure the "unchurched" in to a church with a gun give-away to get them to be believers? Believers in what? Gun worship? What else could this Kentucky church be thinking? From the article:

"In an effort its spokesman has described as "outreach to rednecks," the Kentucky Baptist Convention is leading "Second Amendment Celebrations," where churches around the state give away guns as door prizes to lure in the unchurched in hopes of converting them to Christ.

As many as 1,000 people are expected at the next one, on Thursday at Lone Oak Baptist Church in Paducah, where they will be given a free steak dinner and the chance to win one of 25 handguns, long guns and shotguns.

The goal is to "point people to Christ," the church says in a flier. Chuck McAlister, an ex-pastor, master storyteller and former Outdoor Channel hunting show host who presides at the events as the Kentucky Baptist Convention's team leader for evangelism, said 1,678 men made "professions of faith" at about 50 such events last year, most in Kentucky.

In Louisville, he said, more than 500 people showed up on a snowy January day for a gun giveaway at Highview Baptist Church, and 61 made decisions to seek salvation.

McAlister's boss, Paul Chitwood, the Kentucky Baptist Convention's executive director, said such results speak for themselves. "It's been very effective," he said in an interview.

But other clergy question what guns and gun rights have to do with with sharing the Gospel.

"How ironic to use guns to lure men in to hear a message about Jesus, who said, 'Put away the sword,'" said the Rev. Joe Phelps, pastor of Louisville's independent Highland Baptist Church.

"Giveaways for God" seem wrong, he said. "Can you picture Jesus giving away guns, or toasters or raffle tickets? ... He gave away bread once, but that was as a sign, not a sales pitch."

Nancy Jo Kemper, pastor of New Union Church in Versailles, Ky., and former director of the Kentucky Council of Churches, said: "Churches should not be encouraging people in their communities to arm themselves against their neighbors, but to love their neighbors, as instructed by Jesus."

"Second Amendment Celebrations" in church make a "travesty" of that message, she said. "How terrible it would be if one of those guns given away at a church were to cause the death of an innocent victim."

McAlister, 60, who pastored churches in five states before taking on the role of traveling evangelist, concedes that neither guns nor gun rights are part of the Gospel. But he said he uses the love of guns and hunting in Kentucky as a "bridge to unchurched men so they will hear what we have to say.""

Now I don't know about your church, but mine uses a vibrant ministry concerned with social justice, helping those who can't help themselves, belief in peace and acting for peace, wonderful music, an energetic children's ministry, eclectic music and a minister who is an amazing faith leader to attract the "unchurched". Guns? Never. The Kentucky minister is cynical. This is about politics, not religion. Does he care about the victims? Does he care about the fact that domestic abusers, felons and dangerously mentally ill people can buy guns easily without background checks? Does he care that some of those same folks may shoot one of his church goers? Bullets from guns kill those who attend church and those who don't. They don't discriminate. They kill children, women, gang members, police officers, ministers, choir members, physicians, gun owners- anyone and everyone. This is what churches should care about. It's insane to attract "rednecks" to a church for the purpose of giving away a weapon designed to kill other human beings. Will the minister require a background check for those who win the guns?

And speaking of insanity, Lt. Colonel Robert Bateman, veteran and gun owner, has written another article with his complaints about the NRA. Since I wrote my post yesterday about this increasing epidemic of gun "accidents" by law abiding gun owners, I share his thoughts. If the NRA leaders and lobbyists cared a whit about human lives, they would be working with the rest of us on prevention measures in the name of public safety. But they aren't. Why not? Read from Bateman's piece:

Dads, who had weapons, would kick your ever lovin' ass if you even for a moment treated a rifle, a shotgun or a toy replica of the same as something less than lethal. That was of course if you were their son. If you were not their son, they would call your parents and talk to them. Weapons were locked up. They had a purpose. They were not left lying about, and they were not to be touched when a dad had a "drink or two." Weapons were for killing things, deer and duck mostly, but other prey as well, I will admit.

Those days seem to be gone. This man wanted to show his girlfriend how "safe" three pistols (Three? Did he have three hands?) were, so he placed them to his head and pulled the trigger.

On weapon No. 3, apparently, his thesis failed and Darwin's theory gained another point of evidence.

We lose more than 1,000 Americans per year just to accidents. (Although the police, perhaps for legal reasons, counted this as a suicide.) Not to mix apples and oranges, but back in 2006, the grand total of gun deaths in the nation of 126 million known as Japan was two. Yeah, two. The next year when it "skyrocketed" to 22, it was a national political scandal.(...)

And maybe, just maybe, the NRA does not care. Once, they were an educational foundation that actually did something good. Once, they spent all their money teaching people, well, how to not be so careless as to shoot themselves in the head, among other things. But those days have passed apparently, and now the NRA is about money. There can be no other explanation as to why they so comprehensively abandoned their educational mission and went into almost pure advocacy.

They can certainly see these numbers. They can see that more Americans are killed accidentally per capita than in any other nation, and they apparently just do not care to do anything about that fact. The leaders of the NRA, such as the draft-dodging coward and slimeball Ted Nugent, may not care about this drain upon America's greatness, but I do.

The NRA leadership these days consists of people like the "slimeball" Ted Nugent. Raise your hand if you think he's a shining example of leadership. You can read about other NRA leaders here. It's pretty stunning actually. No wonder so many permit holders and gun owners are making tragic mistakes with their guns. The gun lobby's leaders and lobbyists don't seem to care.

Speaking again of gun insanity, there's been yet another domestic shooting at a Georgia Walmart store. My blogger friend at Walmart Shootings writes about the many shooting incidents at and around the stores. It is pretty insane, actually, that so many incidents happen near where more guns are sold than any other gun dealer in the U.S. Walmart has a vested interest in gun sales, obviously, and in reading the article we learn more. Walmart sells only long guns and the AR-15 is one of its' best sellers. Sales of these type of guns, commonly used in mass shootings, bring in a lot of revenue. But it does seem to be more than a coincidence that so many shooting incidents happen in and near their stores. At the least, the good folks at Walmart stores may want to consider changing their policy allowing those with gun permits to carry their guns inside. What's to be afraid of inside a Walmart store? A mother with her children grocery shopping? A retired couple buying things for their cabin or their house? A sports enthusiast buying equipment? A couple of teen-agers looking for a bargain? Or maybe another permit holder who might just use their gun irresponsibly?

The gun culture of carrying more guns in public may encourage more people thinking they, too, must carry guns in public. This is contributing to a changed culture. That is exactly what the gun lobby wants, of course. Is this the culture we want? Wouldn't we all be better off if public places like Walmart didn't allow those with permits to carry in their places of business? Will common sense prevail in the interest of public safety?

So, yes, insanity is the word to use. In any other country not at war, the carnage of gun violence like that happening every day in America would be insane. And, indeed, other countries have managed to stop the insanity of shootings by regulating guns, gun owners and where guns can be carried. Those gun laws have made a difference in public safety.

Those of us working to prevent gun violence understand that not all gun owners are included in this insanity. Most of them, in fact, support reasonable measures to keep us safer. Most gun owners are safe with their guns and get background checks when they buy them. Hopefully most of them store their guns safety away from little hands, teens and burglars. But the fact that we still have so many gun deaths and injuries in this country, in spite of what most gun owners do, means that we can do better. For that is what this is about. The fact that so many avoidable accidents occur amongst law abiding gun owners ( see my last post) belies the claims that gun rights extremists make about guns making us safer. Perhaps we will come to an understanding that resisting common sense changes to gun laws and the gun culture is a bad idea. It's obvious that we have a problem to solve. Resisting a solution makes no sense. We aren't trying hard enough to reduce and prevent our public safety epidemic. It's time for that to change. Let's get to work to demand the change we want and deserve.