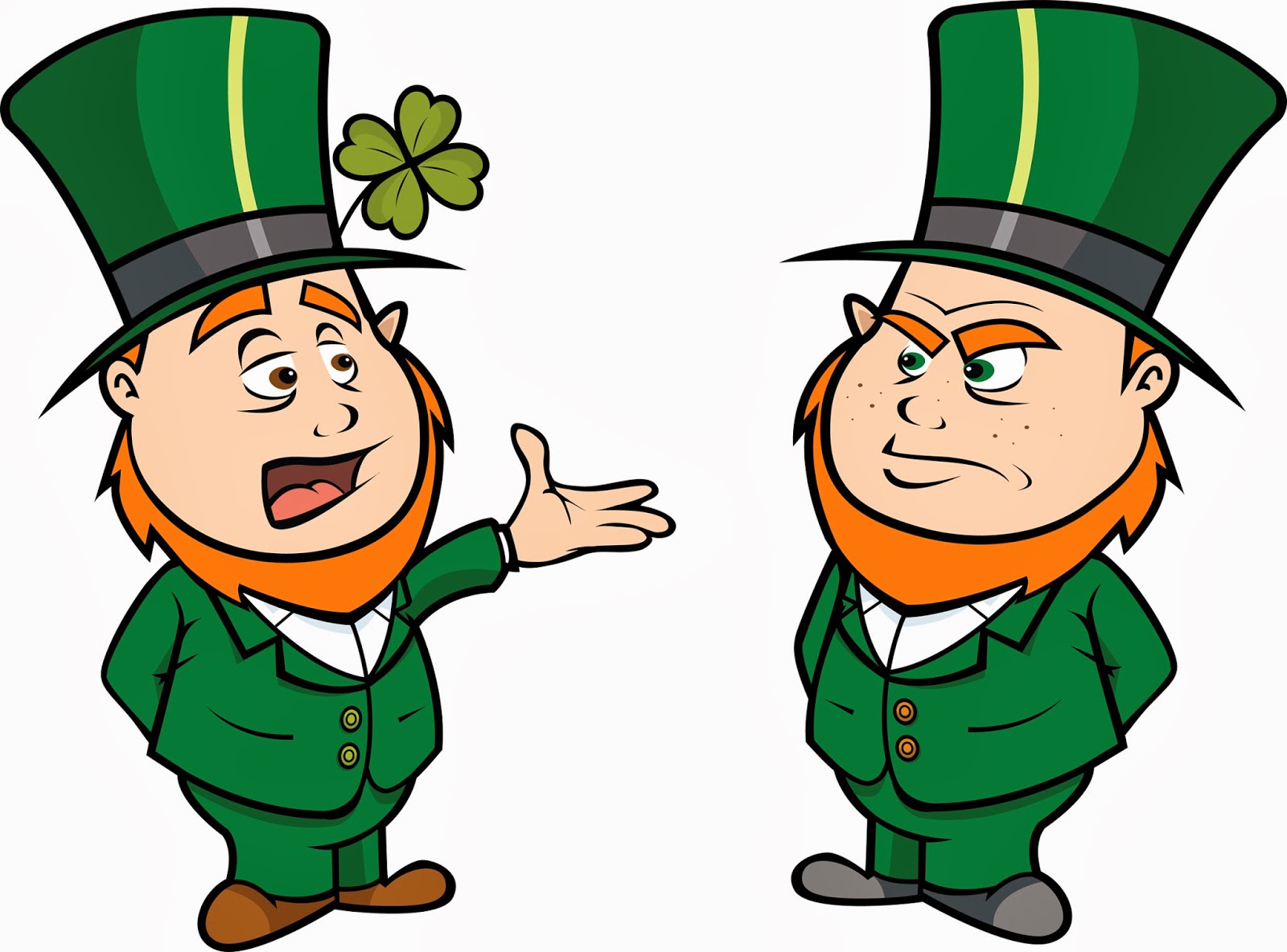 Happy St. Patrick's Day all. I am not one bit Irish. But it is my daughter's birthday today so we feel a special affinity for this holiday. This year, some members of my family and my daughter's friends ran in the "Get Lucky" 7K race in Minneapolis to celebrate her special birthday. It was great fun for all. People were dressed in all sorts of ridiculous outfits- tutus, green wigs, hats, shamrock tights and green striped socks and all sorts of green tee and sweat shirts. We were in the mood for sure even though it was a bit cold for a run.

So what is the story of St. Patrick's Day? There are myths surrounding the holiday. From this article:

"One of the greatest myths and misconceptions about the holiday stems from its namesake–Saint Patrick. Many are unaware of the fact that the patron saint was not originally from Ireland. Patrick was an English nobleman born around 400 A.D. in Britain and kidnapped by Irish pirates at the age of 16. His family was religious, but he practiced atheism early in his life. However, he was reawakened to his faith while enslaved in Ireland. He was enslaved in Ireland for 17 years, escaped and returned to Britain, then returned to Ireland as a missionary. March 17, the day of celebration around the world, is widely believed to be the date of Patrick’s death. However, the true circumstances and location of Patrick at the time of his death remain unclear. He was not immediately recognized as Ireland’s patron saint following his death around 461 A.D. The mythology surrounding Patrick grew and centuries later he was honored as the patron saint of Ireland.

Another common Saint Patrick’s Day myth and tradition that requires further elucidation is the holiday’s iconic symbol of the shamrock. According to folklore, Patrick used the three leaves of a shamrock to explain the Christian holy trinity–the Father, the Son, and the Holy Spirit or Holy Ghost as it is sometimes referenced. It is customary to wear shamrocks on March 17th to commemorate the holiday and this custom dates back nearly 400 years. However, botanists say shamrocks are not uniquely Irish. Most clover species can be found in many areas of Europe.

A third common myth and misconception surrounding Saint Patrick’s Day is that Patrick drove the snakes out of Ireland. While it is true that no snakes exist in Ireland today, the fact is they never did. Ireland is an island land mass surrounded by icy water, which is much too cold to allow snakes to migrate from Britain or anywhere else. This myth most likely stems from the symbolic nature of snakes in literature as evil and Patrick driving out the evil, pagan, ungodly ways from Ireland and bringing a new sense of life and purpose to the country."

There are many holidays based on myths and legends. But most people don't care about that since it is the idea of the celebration that seems to count. No one wants the holiday to be ruined by the true story.

Just as with St. Patrick's Day, there are many myths surrounding the claims made by the gun lobby. Let's take a look at some of them from this article. The first myth is the second amendment means there cannot be "gun control" laws. It is not true. From the article:


"In any event, if you think the Second Amendment prohibits any and all restrictions on gun possession in the U.S. no matter what the circumstances, then you must believe that convicted murderers have the right to carry machine guns in prison. Right?"

The second myth, often made in claims by gun rights extremists is that any restrictions on guns will necessarily lead to confiscation and we all know that Hitler took guns away from the Jews so that is just around the corner right here in the U.S. right? Baloney. From the article:


"In an extensive 2004 study on the topic, Bernard E. Harcourt concluded that “the Nazi regime relaxed the gun laws that were in place in Germany at the time the Nazis seized power.”"

The third myth? That citizens should have guns to defend themselves against a tyrannical government. That is not often said but seems implicit in many claims by gun rights extremists. Let's look at debunking this one, from the linked article above:


"If you believe that any group of private U.S. citizens would be able to accumulate the weaponry necessary to stand up to the U.S. military in an armed conflict, you need to step back, take a deep breath, and acknowledge objective reality."(...) You may not like the fact that an armed domestic resistance against the American government would essentially be impossible, but it’s a fact nonetheless. Deregulating gun laws will not change this fact, unless your idea of deregulating gun laws is to make rocket launchers available and affordable to the entire U.S. population."

The fourth myth that can easily be debunked? Only criminals will have guns if stronger gun laws are passed. More from the linked article:


"I’m not arguing that we should outlaw guns. I’m saying we should erect legal barriers that make it more difficult for individuals with a higher propensity for violence, such as convicted felons or the mentally ill, to obtain guns."

I love that fourth one because, of course, if we stop more felons, domestic abusers, dangerously mentally ill people and other prohibited purchasers from getting guns, then fewer of them will actually have guns. It is the opposite and the claim made by the gun rights community is baloney.

So let's get to the 5th myth to be debunked. Stronger gun laws won't make us safer. In fact, the gun rights extremists claim that more guns carried by more people into more public places is the only thing to keep us safe from all of these criminals and people in the world lurking to do harm. From the linked article:


"A Harvard study from last year showed that between 2007 and 2010, states with fewer gun control laws generally had higher gun-related mortality rates than states with stricter gun control. Another study published in the Journal of the American Medical Association confirmed that finding; and a meta-analysis of other studies, also from Harvard, showed that higher gun ownership rates was correlated with higher homicide rates, both within the U.S. and amongst different high-income countries."

The article above was written for the 80-90% of people who believe in common sense when it comes to guns and gun regulations. But the myths of the gun lobby need debunking. We don't have to listen to the baloney and outright lies coming from the gun rights crowd. They have it wrong in so many ways. The truth is that more Americans are dying from gunshot injuries than any democratized country not at war. Where gun laws are stronger, there are fewer gun deaths. Good guys with guns are killing and injuring others intentionally or accidentally every day. I write about the incidents on this blog all the time. So does Joe Nocera who writes The Gun Report in the New York Times. Here is the latest version. So does the writer of the Ohh Shoot blog, Kid Shootings blog, Walmart Shootings blog and the Coalition to Stop Gun Violence' Insurrectionist Timeline. The Violence Policy Center, the Brady Campaign and the Law Center to Prevent Gun Violence are doing research and providing important information to debunk the myths. Moms Demand Action for Gun Sense in America along with Demand Action ( Mayors Against Illegal Guns) and Americans for Responsible Solutions are demanding changes to our gun laws. These groups and many others are debunking the myths that have been pushed for many years now.

We all want to change the conversation about guns and gun policy. We have to demand it. And we have to know that the myths surrounding the issue are easily bebunked. Don't listen to the NRA's Wayne LaPierre when he spouts his ludicrous and dangerous rhetoric as he did at the last CPAC conference. How can anyone believe in this hyperbolic rhetoric? It's baloney. And, as the article says, it's laughable. And don't believe him when he says: "The only thing that stops a bad guy with a gun is a good guy with a gun."

Baloney. Myth. Not true. Deception. Denial. Maybe Mr. LaPierre should kiss the Blarney Stone so his 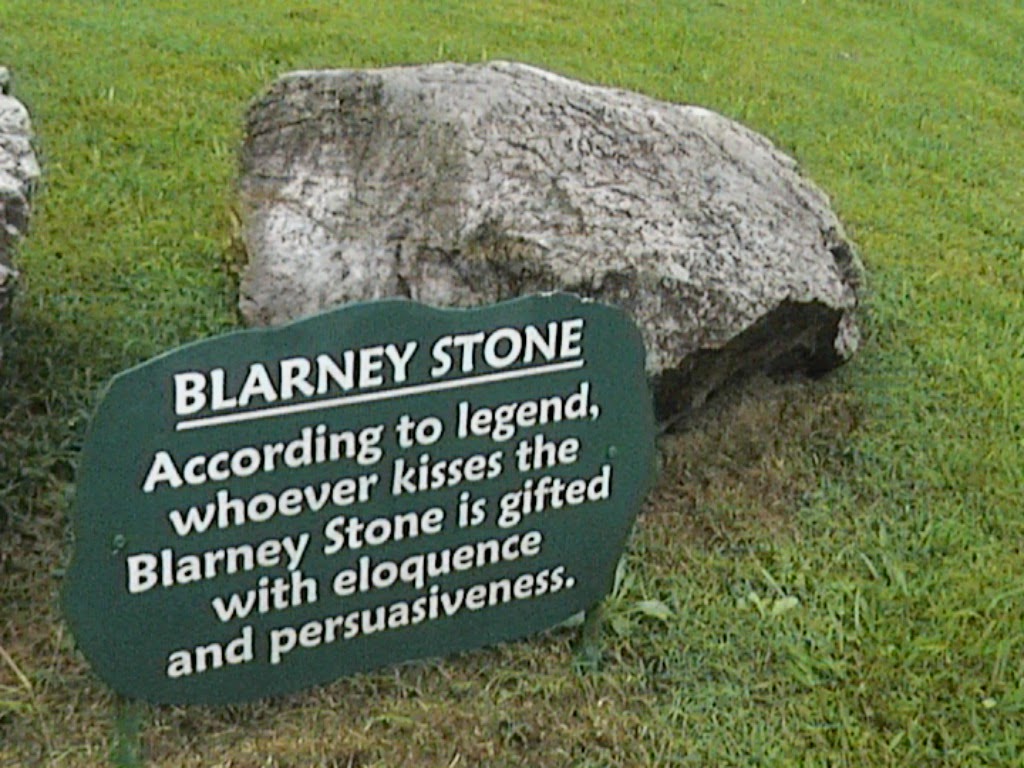 rhetoric would become clever, flattering or coaxing. I'm sure he already thinks it is. And he has fooled a whole lot of people. Don't let the bad leprechaun make the rules about guns. Fight back with the truth. You may have heard that the corporate gun lobby is unbeatable and to be feared. More baloney. Let's debunk that myth here:

Gun advocates note that when surveys ask broad questions on gun control, more Americans say they are against it than for it. But that can't be a result of our national debate. The last time we really debated the issue – in the 1990s – support for restrictions rose. But after the N.R.A. successfully convinced Democrats that they lost Congress in 1994 and the White House in 2000 because of the gun issue (contentions contradicted by the evidence), Democrats retreated from the issue in fear. So in recent years, the debate has sounded like this: Gun advocates say Democrats are sending jackbooted thugs to take away everyone's guns, and Democrats assure everyone they have no plans to do anything of the sort. So it's not surprising that support for "gun control" has fallen.

But public opinion looks much different when you ask people specific questions. Polls show that majorities of Americans favor almost every restriction actually being proposed to set limits on gun ownership. For example, the General Social Survey has long found three-quarters of Americans saying everyone should have to get a permit from the local police before buying a gun. A Times/CBS News poll last year found 63 percent of Americans in favor of a ban on high-capacity magazines. When we have a real debate about what steps we can take to make mass shootings less likely and less deadly, it's those kinds of specific measures we'll be discussing, not abstract "gun control," and advocates of gun safety will have the public behind them.

This is about saving lives, not saving myths that can be debunked. When our politicians stop believing the baloney and the myths surrounding the discussion about reasonable restrictions on guns, who can own them and where they can take them, we will all be better off. But for now, we know we are better than what is happening. It's time for that to change. It will only change if those 80-90% of Americans who believe in common sense start debunking the myths and demanding that our politicians have the courage to do the same thing.

Have a nice St. Patrick's Day. Remember- you can make a difference if you tell the truth. Don't let anyone fool you when you talk about the gun issue. Be clever. Be convincing. Be realistic. Drive out the snakes. Have courage. Break the silence about the myths.