Injustice at the end of a gun barrel? 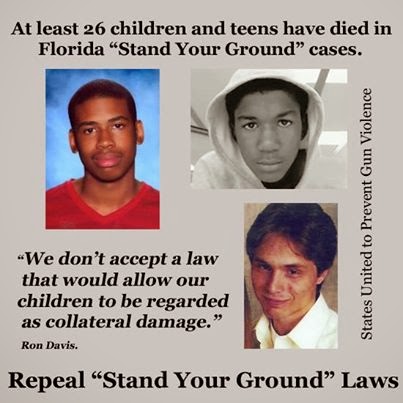 The verdict in the Jordan Davis trial was announced yesterday. It's hard to know what to say about this verdict. Most are confused and outraged as well they should be. This statement from the Coalition to Stop Gun Violence expresses what most Americans believe about this verdict and the taking of an innocent life. From the statement:

"The reason for that is the “Stand Your Ground” law, which allows individuals who believe they are under threat of “great bodily harm” to use lethal force to defend themselves even if, despite their subjective belief, no real threat exists. Dunn’s lawyer, Cory Strolla, cited the law explicity in his closing arguments, stating, “Michael Dunn was in a public place where he had a legal right to be, he had no duty to retreat, and had the right to stand his ground and meet force with force, including deadly force.” Additonally, the instructions received by the jury on what constitutes justifiable homicide contained language directly from Florida’s “Stand Your Ground” law.

For thousands of years, from Biblical law through British common law and into America jurisprudence, we condemned those who took human life when it was not absolutely necessary. In fact, the very reason that our Founders created democratic government was to reject the idea that “the guys with the guns make the rules.” In order to function properly, organized government must be able to offer redress when life is taken needlessly. If it can’t do so, then citizens will be forced to seek “justice” themselves and a spiral of anarchy will begin.

“Stand Your Ground” (aka “Kill at Will”) laws are the product of a new idea, popularized by the gun lobby, that it is morally acceptable—or even virtuous—to take human life when you don’t have to. This idea, when codified in law, encourages people with questionable judgment and little or no training to use lethal force with few if any consequences.

The verdict in the Jordan Davis trial, coming on the heels of the acquittal of George Zimmerman and other travesties of justice, shows that Florida is embracing this vision of vigilantism and anarchy. The state is increasingly powerless to prosecute murders and residents now have no choice but assume that even mundane arguments can lead to gunplay. This might be good for the National Rifle Association, which has promoted “Stand Your Ground” laws as a way to increase profits from sales of compact pistols, but it is disastrous to public safety and civil society.

Let us all heed the words of Ron Davis, Jordan’s father: “We don’t accept a law that would allow our children to be regarded as collateral damage.” All Americans of conscience must now come together to do the critical work of repealing immoral “Stand Your Ground” laws in the 26 states where they have been enacted. We owe our children, and our nation, nothing less."

We certainly do owe our children a safer society than that envisioned by the corporate gun lobby. There is no common sense to any of this. I believe the gun lobby knows this. But they have been clever enough to get state legislators to believe that the average person NEEDS a law to give them license to kill. So kill they do. Here are the Florida Stand Your Ground cases through winter of 2013. 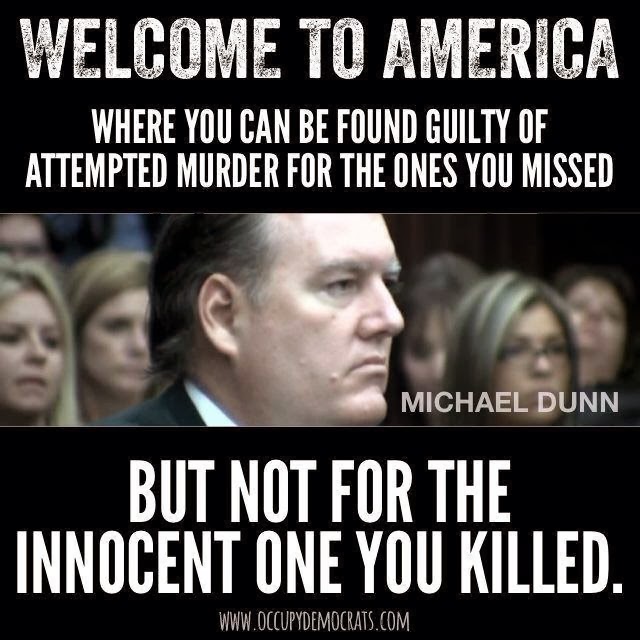 Some form of justifiable self defense is allowed in every state in the nation. There is no need to extend the idea of "standing your ground" to public places and co-opt our English language to make people believe they can kill someone if they have the slightest feeling of danger to themselves. When a man can kill a teen-ager because of an argument that he could have avoided by driving away, because he "thought" he saw a gun in the car, an injustice has been done. And one does need to wonder if these laws are to legalize the killing of those we simply don't like. This article highlights the Florida law and how often the victims are black:

When asked about the relevance of the law to this case during a press conference, Strolla told reporters that he “strategically” decided not to seek a separate Stand Your Ground hearing that could have given Dunn immunity before trial, because of the national media attention. He claimed the law was therefore not relevant to the case. But the jurors were nonetheless advised to consider the law when deciding Dunn’s guilt, by both Strolla and in the jury instructions.
Just prior to the trial, the State Attorney’s Office released a set of letters Dunn sent from prison revealing significant animus toward blacks. “The more time I am exposed to these people, the more prejudiced against them I become,” he said in one. “This jail is full of blacks and they all act like thugs,” he said in another. The letters did not come into play during trial. But they reveal the sort of racial undertones that have been prominent in many Stand Your Ground cases. One study found that white defendants with black victims are far more likely to have their killings deem “justified” under the Stand Your Ground law.

Another article reflects the fear of what this means for minorities, especially those who have the misfortune to live in Florida. From the article:

With that said, there's another way to look at this. If Dunn had killed Davis and his friends—or if he had killed Davis without shooting afterwards—then, by to the logic of the jury, he would have escaped punishment altogether. Which provides a guide, of sorts, for future killers, racist or otherwise. Claim fear, kill your target, and either do so away from people, or be sure to kill any witnesses. As long as you can portray the witnesses as also threatening, it seems like you could avoid jail time.
Which, you know, is insane, both in what it says about Florida's “Stand Your Ground” law—your best bet for getting away with murder is to shoot first and kill everyone—and what it says about the value of black lives vis-à-vis the state's legal system. According to the criminal justice system of Florida, you are right to fear African-American men, and if you decide to act on that fear with violence, then you stand a good chance of avoiding conviction, on account of a jury that—more likely than not—will sympathize with your fear.
The facts back this up. In states with “Stand Your Ground,” homicides with a white perpetrator and a black victim are most likely to be ruled "justifiable." By contrast, it is least likely—by a factor of ten—for black on white homicides to receive the same designation. (...)
I think I speak for many black people when I say that's terrifying.


We are better than this as a country. It's time for the folks with common sense to demand communities free of the gun violence that devastates too many families. The fear and paranoia spouted by the gun rights extremists is fear of something that they really can't name. Far too many shootings are domestic in nature, suicides or shootings like that of Jordan Davis and Trayvon Martin- senseless shootings of another human being for "looking fearful or threatening" when proof is not required. And for the shootings committed by actual criminals, domestic abusers, those who are dangerously mentally ill or fugitives and other prohibited purchasers, why aren't we trying harder to stop them from getting their guns? Human life is worth more than this. This is not the America we want or deserve. Lives depend on our getting this right because what we have now is clearly not working. It's time for that to change. Let's get to work.
Posted by japete at 2:54 PM