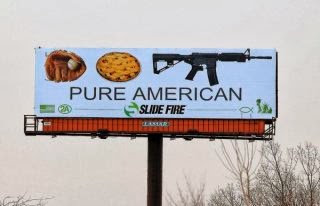 As my readers know, I write a lot about shooting incidents, some of them completed by otherwise "law abiding" gun owners, some by those who shouldn't have access to guns in the first place. I write about irresponsible behavior with guns as well. Why? Because we have a problem in America. Too many people are being shot in avoidable senseless shootings. We are not having a rational national discussion about the role of guns and the problem of gun violence in America. Whenever a national discussion occurs, like it did after the Sandy Hook school shooting that horrified the nation, it becomes irrational in a hurry. The gun rights extremists refuse to contemplate a country where stronger gun laws co-exist with rights to own guns. It has become a national embarrassment, and inexcusable, to say the least.

Who are these folks who won't abide a rational common sense discussion? I just ran into this great commentary about the gun nuts as compared to the responsible gun owners:


A gun nut is someone who reacts poorly to the idea of following the “well-regulated” portion of the Second Amendment. Gun nuts are angry, vitriolic, slightly (or not so slightly) paranoid, and believe the government and liberals are coming to take all their guns. They hoard guns and ammunition, like they are preparing for the zombie apocalypse, and think anyone who supports better gun laws are the zombies.

The article went on to describe a campaign by Moms Demand Action for Gun Sense in America requesting that a billboard advertising an assault rifle, as if it was as American as apple pie and baseball, be taken down. Assault rifles should not be put in the same category with apple pie and baseball. That is the point. Other countries see America as a country where guns are as important as the every day pleasures of life. What a sad commentary on our culture. Back to the linked article above. The gun rights extremists, or gun nuts as this writer calls them, had to weigh in with ugly and offensive comments. More from the article:


The Chicago Tribune ran an article on the billboard, allowing comments on their website. A woman named Evangeline wrote how upsetting the billboard was to her, and asked how many more kids need to die. In response to Evangeline, a comment appeared that was so deeply offensive, and so heartless, it could only have been written by a gun nut. Here is a screenshot of Jordan Zoot’s comment to Evangeline.

You can read the screen shot for yourself but here is the comment in question: " Evangeline Valhalla. Maybe YOUR kids need to be killed before you understand why we own firearms... it would be well deserved". Now I ask you if a rational gun owner wrote that comment. I ask you if a rational human being wrote that comment. The word gun nut is used by this writer because stuff like this is just plain nuts. It is also threatening and boorish. How can we have any kind of a discussion when reasonable people are only trying to protect our children and our communities from the devastation of gun violence and are met with this sort of unreasonable opposition?

The article continues with this:


Read it again. Yes, he leaves out the word “be” in his sentence telling a woman her kids deserve to be shot, but the message is very clear. Agree with me, or someone should shoot your children. This is the SOP for gun nuts; you better see it my way, or else. Look at Ted Nugent. Nugent, during a concert, told Barack Obama to “suck on his machine gun,” called Hillary Clinton a “worthless bitch,” Obama a “piece of shit,” and told attendees at an NRA convention that if President Obama was reelected he, Nugent, would either be dead or in jail. Rational people don’t do that. Rational people do not tell a presidential candidate to suck on a machine gun, or make incendiary comments that garner them a visit from the Secret Service.

This is not OK. This is what gives some responsible gun owners pause. A young NRA member recently wrote about why he has left the NRA. Here is his story from the article:

WHY I LEFT THE NRA

The reason I let my membership expire — a difficult decision to make — was because LaPierre’s tenure as face of the NRA had become too harmful.

“This guy doesn’t have what the human resources gurus call ‘people skills,’” is how retired gun lobbyist Richard Feldman described LaPierre. While I am not fond of Feldman, his observation of LaPierre summarizes my biggest issue with him and his leadership of the NRA: He does not know how to relate in a non-combative manner.

THE NRA AND ITS PR PROBLEM

The NRA has a public relations problem. LaPierre has managed to drive the organization into an endless schoolyard-yelling match with leading gun control advocates and, really, all of America.

If it was not learned at recess, it will not ever be learned: Yelling does not get you anywhere, especially when you are at the helm of one of the most hated groups in America.

It seems when LaPierre is put on the defensive — which has been the case of late — he flails hopelessly and creates a negative perception of an otherwise thriving, helpful organization.

NRA DOES MORE THAN CREATE PROBLEMS

Many do not realize it, but the NRA has more impact on gun safety laws and education than any other organization.

“In civilian training, the NRA continues to be the leader in firearms education,” according to the NRA website, which adds that 55,000 instructors educate more than 750,000 gun owners each year. I bet you have never heard that statistic, a testament to LaPierre’s shortcomings.

The NRA does a lot of good, but they are perceived, thanks to LaPierre, as disconnected from the average American. LaPierre often calls President Obama, leading Democrats and other gun control advocates “enemies of the Second Amendment.” However, the only enemy I see is LaPierre.

There's more here, including why LaPierre refuses to compromise with those in favor of "gun control." Why oppose everything that the public, and yes, even gun owners and NRA members, clearly favor? If the gun lobby's leaders and lobbyists continue to oppose measures that will lead to better public safety, what do they actually stand for any more? Some members are wondering and asking.

And speaking of opposition to reasonable measures to prevent gun violence, the gun lobby came out in force last week to try to repeal Colorado's recently passed gun laws. They failed. Check out this admission by one of the Colorado gun nuts of his lie to petitioners in the recent Colorado recall election after the passage of the laws last year.  From the article:

To summarize, Mr. Head starts by claiming that his problem isn't with background checks on gun sales, but with private transfers. Head then gives examples: of his brother and his mother, both of whom he claims he would have to perform a background check on to "loan" a gun to them for over 72 hours.
The problem is, that's just not true. Family members are totally exempt from the requirements of HB13-1229.
But it gets even worse, as Head doubles down on his mistake under "friendly" questioning from GOP Sen. Ted Harvey:

I changed a lot of people's minds by making that contrast. The statistics are potentially right, although I'm aways leery of statistics, that we keep hearing, 80% of Coloradans, you know support background checks for sales, or 90% nationwide. You talk to people and they'll say 'yeah, absolutely,' and then when you tell them, 'okay that's a sale, but what about a transfer, you know, from you to your brother or whatever, they do a 180. [Pols emphasis] Instantly. They say 'well wait a minute, you're talking just loaning it?' And I say 'yeah, that's what the legislation says.' And they would say, 'well sign me up, that's not okay.' That was the overreach…

Not only did Mr. Head admit to giving out false information in order to obtain recall petition signatures against Giron, he exposes the underlying senselessness of the whole effort. You see, folks, Sen. Angela Giron was the sponsor of a key amendment to HB13-1229, #L.028, which created the exemption in the law for family members. That is, the very issue Head claims to be upset about.
Oops.
It doesn't matter if this was simply ignorance or a deliberate deception. After garnering praise from almost everyone, even from this blog for running a tight ship with the recall petition drive, now we know that Victor Head's "success" in bringing the recall of Sen. Giron to the ballot was at least partly the result of lies. By Head's own admission, he changed minds in that recall petition drive by telling undecided voters something that wasn't true. On any objective level, that is a travesty, and every single person who lived through last year's recalls needs to understand it.

It must be hard to speak out honestly against measures the public actually supports, like background checks. So perhaps deception is the only way to win. In the proposed Manchin-Toomey federal background check bill, lying on the desks of our Congress members, private sales among family members are exempt from the background check provision. The same is true for the measure proposed in Minnesota in the last legislative session. But never mind. Facts don't seem to matter to some.

One needs to wonder why it's necessary to lie? Requiring a background check on private sales at gun shows and on the Internet should not interfere with responsible gun owners' ability to purchase guns. So if these gun nuts are responsible, what's the problem? If they, themselves, are law abiding, they won't be affected by measures to stop those who aren't. Do they actually want criminals, domestic abusers and dangerously mentally ill people to be able to buy guns? Or do they just want to be against anything those on the side of preventing gun violence support? Why? Because it ramps up the fear and paranoia needed to keep voters in the fold of the far right. It also keeps gun purchasers buying guns. Follow the money for the answer to the questions I have asked.

It's time for this to change. It's time for a rational national conversation void of the threats and vitriol coming from the gun nuts. These are a minority and the tyranny of the minority is a dangerous thing. Lives are lost every day in large numbers due to gunshot injuries. In fact 80 lives are lost on a daily basis. Is this OK with the gun nuts? Would it be OK with them if it was their child, their sister, their brother, their mother or father? We can do better than this. Let's get to work.
Posted by japete at 2:27 PM