Tucson- Another anniversary amidst the continuing senseless shootings 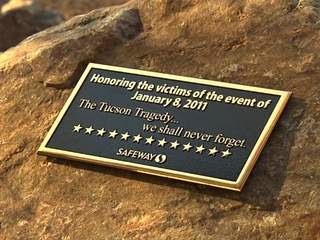 This is the 3rd Anniversary of the Tucson shooting. A lot has happened since 6 people were shot to death and 13 were injured, including U.S. Representative Gabrielle Giffords. We have seen now the devastation suffered by Gabby Giffords as she struggles to walk and to speak. But she has become an outspoken voice for common sense gun laws. She and her husband Mark Kelly founded Americans for Responsible Solutions and they have both spoken at Congressional hearings about gun legislation after the Sandy Hook shooting. They intend to make a difference and they will. They have a very clear understanding of why we need to pass stronger gun laws. Gabby Giffords writes here about her long road to a partial recovery and her resolve to make a difference. From the article in the New York Times:

I asked myself, if simply completing a normal day requires so much work, how would I ever be able to fulfill a larger purpose? The killing of children at the school in Sandy Hook a little over a year ago gave me my answer. It shocked me, it motivated me, and frankly, it showed me a path. After that day, my husband and I pledged to make it our mission to change laws and reduce gun violence in a way that was consistent with our moderate beliefs and our identities as proud gun owners. We knew it wouldn’t be easy, that special interests were arrayed against us, that congressional dysfunction was an enemy.
Predictably, Washington disappointed us during the first year of our work with the organization we began, Americans for Responsible Solutions. Many of you were outraged at the failure of the Senate to pass the background checks bill, and so was I.
But I continue to be inspired by my fellow Americans. By any measure, they’re with us. They know gun violence is a complex problem. No one law will make it go away.
We’re not daunted. We know that the gun lobby, which makes money by preventing sensible change, relies on dramatic disappointments to wound us, reduce our power, push us back on our heels.

Here is Representative Giffords in her own words speaking to Congree last January:


Three years later, what have we learned? Not much. We have seen the continued devastation caused by gun violence in communities all over our country. We have seen the ugliness of the gun lobby which fights against life saving measures to save the gun industry and preserve a way of life that doesn't allow for compromise. We have seen the victims of other heinous mass shootings have to go to Congressional hearings to beg Congress to pass laws to deal with the latest heinous mass shooting. This is crazy. One wonders, at long last, what it will take before our leaders decide they have had enough? The American public has had enough. But thanks to the corporate gun lobby's strong opposition to anything that looks like "gun control" to them, we are still dealing with one mass shooting after another. And thanks to the lack of courage and conviction on the part of our leaders to deal with this shameful loss of lives without doing anything about it.

And the daily carnage continues as well. In the past day or so, I have come across a number of "accidental" shootings. These are mostly shootings by "law abiding" gun owners who have become careless or complacent with their guns. Guns are dangerous and designed to kill other human beings. There is no room for irresponsible gun use. But incidents like the ones below are occurring on a more regular basis because it is inevitable that when there are more guns around, there will be more shootings. Below are some of the incidents. My friend at the Ohh Shoot blog writes about these shootings on a regular basis. There are more than enough to keep the writer busy.

A Virginia home owner who thought he heard an intruder instead shot himself.

A NewYork man, showing his gun to a friend while eating at a restaurant shot himself and his friend.

This one was more tragic, resulting in a death- A New Mexico man allegedly told a friend to shoot him in the head with his gun as he assured his friend the gun was not loaded. Was this an accident" Time will tell.

A Wyoming Lowe's customer accidentally discharged a gun in the store.

Three of the four incidents resulted in injuries; one in a death. There is something wrong when so many "accidents" are happening with guns. It makes us wonder what kind of training people get when they purchase guns and/or when they get permits to carry loaded guns in public. We know that in Arizona, people like Jared Loughner can carry loaded guns in public with no permit. Six people died during the mass shooting in Tucson 3 years ago at the hand of a young man with mental health problems who needed no permit ( no training) to carry a deadly weapon in public. Something is wrong with our gun laws. We are better than this.

And more on what's wrong with our gun culture-This one is not a shooting but could have been. How does it occur to a government Homeland Security official to get out his handgun and use it as a laser pointer at a meeting? Was the gun loaded? This was a bizarre and potentially stupid and dangerous incident. Shouldn't a law abiding gun owner know better than this? Sigh.

And last, but certainly not least, there has been a tragic shooting in my state. A young student at the University of Minnesota Duluth shot and killed a friend and then himself. The shooter, a 19 year old freshman, suffered from depression. And now two more families can be added to the list of victims whose lives have been devastated by senseless gun violence. Their lives will never be the same. And a tragedy like this has a ripple effect that extends to friends and the entire community as well as the two university campuses where the victims attended classes.

We live in a country where easy access to guns and lax gun laws have led to a culture of violence not seen in any other developed country not at war. And what will we do? It's definitely time for the changes we want and deserve so that we can be free of the violence that is devastating so many families and so many communities. Let's get to work to make changes.

I would like to point out to my readers that today, the 3rd anniversary of the Tucson shooting, is a day of action for the National Action Network with an emphasis on youth. Below is what is going on around the country: 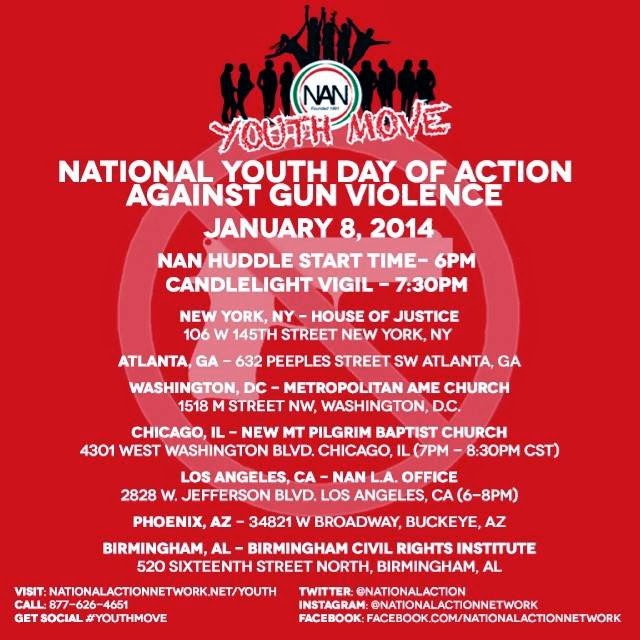 It's heartening to know that our youth are getting involved in the issue of gun violence and plan other good things later in the year.

I simply must add this "accidental" gun discharge by a "law abiding" Kentucky legislator to my list. Here is what she said when asked:

When asked by reporters Wednesday to see where the gun was discharged, Combs declined and said she was putting the gun away because "I don't want to use it anymore."

"I thought it was totally clear," Combs said Wednesday. "I am a gun owner. It happens."  Combs added no one was in harms way.

Speaker of the House Greg Stumbo asked the Kentucky State Police to investigate the incident after he learned of it.

No one was hurt.

"It happens"? Seriously? It shouldn't happen. She was lucky that no one was injured in the incident but there is no excuse for this. And saying, "it happens" should make us all think twice about all of these incidents. If we just let these things "happen" we will see more and more people injured and killed. We can't let these incidents just "happen". Gun owners and permit carriers should know better than this and should be held accountable for their stupid and dangerous actions.
Posted by japete at 7:25 AM