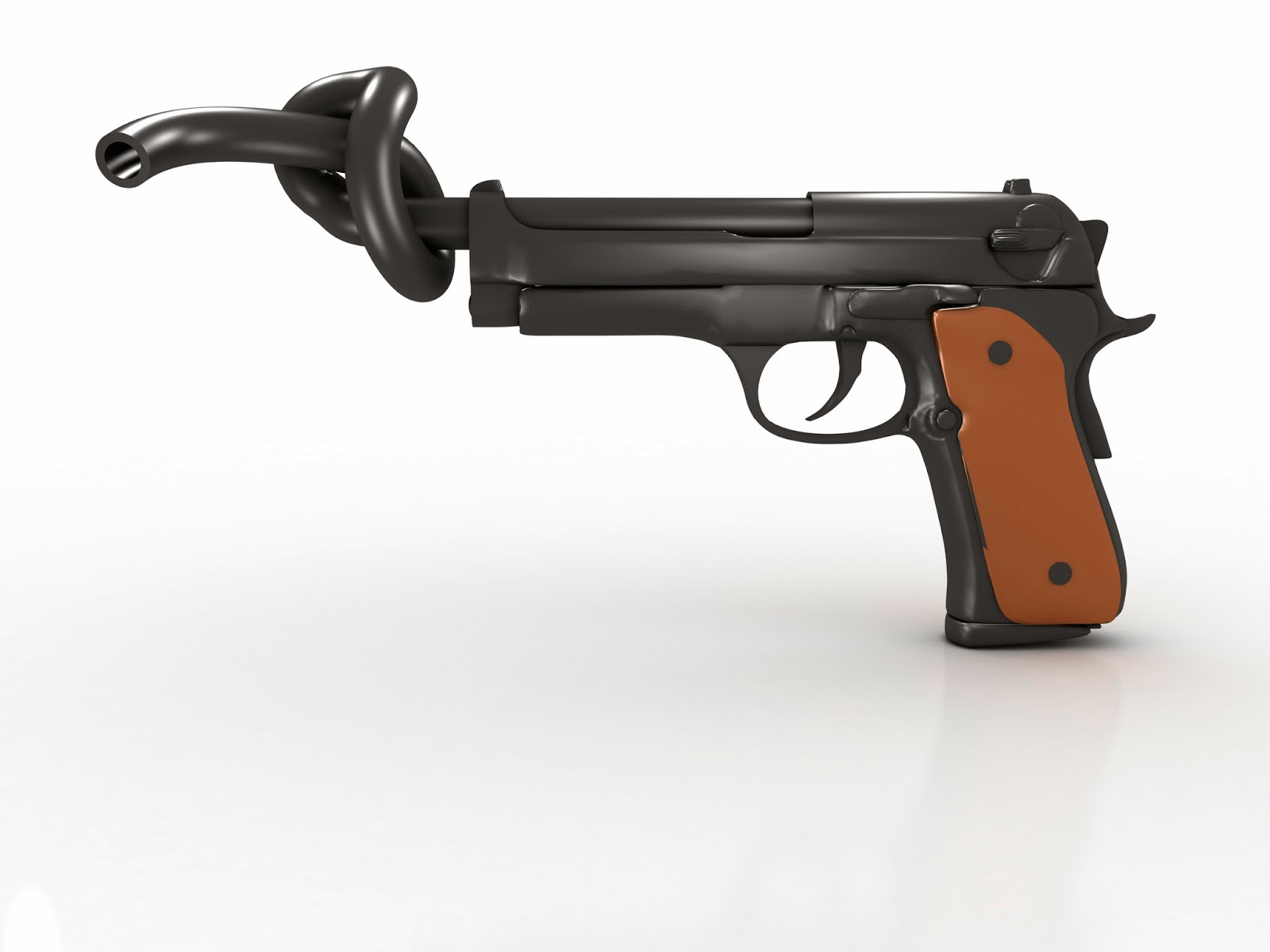 In light of the celebration of Martin Luther King day, wouldn't it be great if we had a day with no violence? And in particular, no gun violence? We spent a lot of time in my church yesterday talking about how to act for justice in Dr. King's example. Martin Luther King wrote and preached about a lot of justice issues- economic disparity, civil rights, racism, and, of course, non-violence. This article contains a quote from one of King's daughters urging that today be a day of non-violence. From the article:

"People worldwide should honor the memory of Rev. Dr Martin Luther King Jr. by making Monday a "no shots fired" day and ringing church bells in support of non-violence, urged the daughter of the slain U.S. civil rights leader.

Church services and tributes will be held across the United States to commemorate King's 85th birthday on Monday, a federal holiday. At the same time, there is a push for a new monument and possibly a major movie production from director Oliver Stone.

"Dr. King's philosophy of non-violence is more relevant, I believe, than it was 10 years ago," King's daughter, Bernice, told Reuters.

In a time of school shootings and increasingly violent movies, television shows and video games, his message of non-violence should continue to resonate, said his daughter, chief executive officer of the Atlanta-based Martin Luther King Center which promotes his philosophy of non-violence.

"America has an enormous appetite for violence. I don't know why we have such an affinity for that, but I do know it has to stop," she said."

"No shots fired." In what other modern developed country not at war does someone have to implore that there should be no shots fired for just one day? We already know that about 80 people a day die in America from gunshot injuries including homicides, suicides, and "accidental" shootings. This is not a non-violent society. It is not a non-violent world but many countries go for weeks or months with no gun deaths. But in America, as King's daughter said, we have a "time of school shootings and increasingly violent movies, television shows and video games..." Indeed we do. And our "appetite" for gun violence is unique amongst democratized nations not at war. And she knows that it has to stop. How will we stop it? We can if we have the will. In America, someone has to ask that no shots be fired for just one day.

Martin Luther King Jr. could not have envisioned a country rife with the daily gun violence that continues unabated. He himself, of course, died from a gunshot injury. He was shot and killed in 1968. So was Robert Kennedy, months later. Since 1968, more Americans have died from gunshot injuries than Americans who have died in all wars since the country's beginning. From the linked article:


To absorb the scale of the mayhem, it's worth trying to guess the death toll of all the wars in American history since the War of Independence began in 1775, and follow that by estimating the number killed by firearms in the US since the day that Robert F. Kennedy was shot in 1968 by a .22 Iver-Johnson handgun, wielded by Sirhan Sirhan. The figures from Congressional Research Service, plus recent statistics from icasualties.org, tell us that from the first casualties in the battle of Lexington to recent operations in Afghanistan, the toll is 1,171,177. By contrast, the number killed by firearms, including suicides, since 1968, according to the Centres for Disease Control and Prevention and the FBI, is 1,384,171.

That 212,994 more Americans lost their lives from firearms in the last 45 years than in all wars involving the US is a staggering fact, particularly when you place it in the context of the safety-conscious, "secondary smoke" obsessions that characterise so much of American life. (...)

Guns just make death all too easy. Of violent deaths in America, firearms injuries are the leading cause. In some states, death by bullets is about to surpass auto accidents as the leading cause of non medical deaths. The corporate gun lobby and its' fear and paranoia campaign has led to the idea that everyone should have guns around at the ready in case of some imagined threat to their freedoms or yes, to their lives. Occasionally it happens that a gun is used in justifiable self defense. But it's rare compared to the number of actual gun deaths caused by even law abiding gun owners in just seconds of rage, anger, fear, depression, while dangerously mentally ill or drunk or irresponsible access to guns by little children or teens. It's amazing really that nothing is done in the face of all of this. Thus, I write about the shootings and lobby for sensible gun laws, and encourage safe storage of guns, asking if there are guns where children play, point out that lots of gun deaths are because people don't think through the risks associated with having loaded guns around and just plain get angry about all of this.

The sermon at my church yesterday noted that it was OK to get angry about something that has affected you or a loved one because often that anger can lead to action for justice. So yes, sometimes I'm angry. When a loved one is taken so suddenly and violently, people are angry over the lost potential of that person, the lost times to spend with that person, the lost love, the lost hugs, the loss of family time, the loss of not getting to know that person into old age and the void left behind.

Should a kid who plays "ding dong ditch" be shot for playing a prank? Would that rise to the occasion of shooting in self defense of the home? Why would someone think to shoot an unarmed teen-aged prankster?  Could this happen? In Pennsylvania, a man shot at kids who were ringing his bell. He hit one of them in the leg. From the article:

Herman — who keeps a loaded gun in his house — said it was hard to believe someone would shoot down another person for ringing a doorbell.

“I don’t think I would shoot anyone for knocking on my door or ringing my doorbell,” he said. “If they tried to break into my house, that’s a different story.”

That is just one of many similar comments. A gun was not needed in this situation. But a gun was at the ready and so it was used. That's the American gun culture at its' worst. The shooter was lucky that no one was more seriously harmed. And a gun in the home, ostensibly for self defense, can be used in a senseless shooting such as this one. In some states this shooting could rise to a claim of self defense. But Pennsylvania's "Stand Your Ground" law is fortunately different from Florida's.

The problem with guns is that many people who own them believe they have to be at the ready to take care of all of those burglars, teen-aged door bell ringers and felons who are surely coming to do harm. The problem with guns is that when they are not locked up safely away from those who shouldn't have them, bad things can happen. The problem with guns is that they are often the item(s) stolen from homes during burglaries. It turns out that most home "invasions" or burglaries happen when home owners are not at home. That being the case, having guns around, often loaded ones at that, for fear of a home invasion, doesn't work very often to stop the burglaries. Instead, as the linked story here about 40 guns stolen from a Seattle home, guns are stolen and end up in the illegal gun market for felons and others who shouldn't have them.

Stolen guns is one of the risks of having them around in the home, especially when not locked up safely. There is a definite risk to having guns around the house in general. Some gun owners don't seem to recognize this notion. When I first started writing this blog, I would come across incidents of "accidental" gun discharges and thought they were stupid and dangerous and rare. I have changed my mind. Incidents like this one of a man taking off his pants, where his gun was stored in the pocket of those pants, and being shot in the chin, are more frequently found in news reports. As my readers know I link often to the Ohh Shoot blog where the writer is keeping track of "accidental" gun discharges, almost all of which are by "law abiding" gun owners. Even though these are the folks who are supposed to know about the guns they purchase and own, do they? This is the case I was making in a recent post about requiring training for everyone who buys a gun. It just makes common sense.

In my last post, I wrote about otherwise "law abiding" gun owners shooting and killing people they know and love or even strangers in some cases. But here is yet another domestic shooting, this time in Texas, ending in the mother of two small children dead and her estranged husband also dead by suicide. I wrote about 3 of these in my last post. And now just one more of the many that happen almost on a daily basis. A gun is a danger to its' owner and people who know and love that owner. There is a definite risk to owning a gun. Do people who buy and own the guns recognize this risk? Do they think anything like this could happen to them or by them? I wonder.

This shooting of a Michigan child by a 4 year old cousin who found a rifle under a bed was in the Minnesota news. These are the stories that should make us work together to strengthen our laws and work to prevent senseless shootings however we can. I am hoping that will happen. I believe it is possible if we have the will and are willing to have a national conversation about keeping our communities free from the gun violence that is so devastating to our families.

So today, let us honor the life of Dr. Martin Luther King Jr. Dealing with differences in a non violent way produces better results. Violent deaths and injuries should not be the result of differences of opinion or anger towards another person. It's time to make us all safe from the gun violence that devastates families and communities all over America. Dr. King's family understands this all too well. Let's get to work to make the changes we want and deserve.