The time is now to be courageous, to be hopeful and to make noise 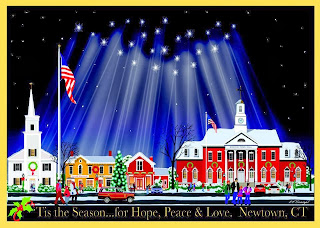 Where do we go from here? The one year anniversary of the nation's most heinous shooting is upon us. What will happen when it's over? Will we act as a nation to keep our children safe? Some measures have already been taken and the national conversation has begun.


"...It does appear, however, that that sad and startling day at Sandy Hook Elementary promoted a nearly universal awareness that no school can be assumed to be safe – and that every school needs to take a comprehensive approach to trying to best ensure their students’ safety. (...) Most influential – and sobering and inspiring – has been the efforts of Sandy Hook parents to promote a ‘cultural change campaign’ to properly orient our attention on violence prevention, particularly gun violence aimed at our children.  It is hoped that this effort will inspire a change in our collective mindset that will do away with the philosophical rhetoric about the pros and cons of gun control and gun rights and focus instead on ways to prevent gun violence from permeating our schools. (...)

We just witnessed a government shutdown that kept scientists away from doing their work. Deciphering the inner workings of the brain, the effects of genes on development, and the impact of a multitude of environmental factors that convey risk for mental illness is a task of extraordinary complexity. Bringing sustainable, evidence-based interventions to those in the population who need them is a daunting undertaking. Until we grasp how important this effort is, and embrace how much financial support it will take, we may find ourselves wondering and debating  if a future shooting could have been prevented via advances in knowledge and practice.

Although these three public health challenges remain, it is good to know that they are at least not being dismissed or are fading away. We may eventually look back on that horrific day at Sandy Hook Elementary as a turning point and catalyst for making real and sustainable progress in our efforts to keep children safe in school."

There is hope. We have seen nothing like what has happened after the Sandy Hook shootings. Now "we are all Newtown" as some have said. We all felt the shock of the deaths of 20 first graders. This was just too much. This article by Monte Frank, a Newtown parent  who has been so active in promoting peaceful solutions to gun violence shows the resolve of the Newtown families and the hope they have for positive change.

The day I have been dreading for a long time is almost here. This upcoming Saturday is 14 December, a year since that dark day when evil visited my town killing 20 children and 6 educators at the Sandy Hook School, that wonderful community school down the road from me.

I feared that we would be hurled back to that awful period following 12/14 when the media overran the Connecticut town no one had heard of, a time when we could not sleep, we spent our days pretending to be strong for our children, and we quietly escaped into the bathroom to cry. But now that the "day" is so near, my trepidation has subsided. At the six-month "anniversary" Newtown Reverend Matt Crebbin ended the interfaith service he led by blaring Bob Marley through the Church's sound system: "One Love! One Heart! Let's get together and feel all right." He was right. Newtown got America together and began building a partnership among communities from coast to coast, all united to reduce gun violence, and, it feels all right – or, at least, a little lighter.

On the cusp of the anniversary, I have HOPE, hope that because of this new coalition of Americans, "change is gonna come". Newtown is no longer just a place, but a movement.

Lots of good things have happened since the Newtown shooting. Media Matters has put the list together and is worth reading:

The gun violence prevention movement has won numerous victories in the year since the tragic mass shooting at Sandy Hook Elementary School, even as the media has often been quick to ordain the demise of the push for stronger gun laws that are overwhelmingly favored by the public.
The year following Newtown has seen the advance of gun safety as an issue important to Americans, including a renewed interest in gun safety legislation at the federal and state levels, new evidence that the NRA cannot determine election outcomes even in its home state of Virginia, increased grassroots and monetary pressure on the gun safety issue, and cultural indicators showing a rejection of the NRA's fringe agenda.

The article goes on to list the state gun laws passed, the rejection of the NRA's attempts to make their own agenda the only agenda about guns and gun violence, election victories in spite of the NRA, corporations waking up to the fact that advertising guns like the one used at Sandy Hook, for example, may not be a good idea after all and the new energy and organizations formed after the country's most heinous mass shooting.

Watch this video about state gun laws and improvements to our mental health services:


But in spite of all of this, nothing ever stops the pro gun side from being tasteless and insensitive. This Florida Congressman claims it's a coincidence that he will be holding a "gun safety" program on December 14th. Really? If he thinks we believe that, we have a bridge to sell him in Brooklyn. If this Congressman doesn't recall that the date of the country's most heinous mass shooting was December 14, 2012, then perhaps he should be reminded.

Further the pro gun side intended to have displays of guns and rallies on December 14th. When they got push back, they moved their "guns save lives" events to December 15th. Clueless. We understand the real intent of these guys. They love to be in the faces of gun violence victims and gun violence prevention advocates. They feel free to use offensive and threatening language. They hate victims and often even verbally attack them. I have experienced that right here on this blog. This vitriol has increased recently on blogs, articles and Facebook. Can one say they are "shooting themselves in the foot"?

And in another act of insensitivity, a legislator is going to give an assault weapon away. Way to go!! Right after the anniversary of the Sandy Hook shooting, giving an assault rifle away is simply not OK. From the article:


State Senate Majority Whip Brian Nieves (R-Washington) plans to give away a new Sig Sauer 516 Patrol AR-15 as part of his second annual clay shooting fundraiser on Oct. 12, according to a Facebook invitation for the event. Different versions of the AR-15 assault weapon were used in both last year's shooting at a movie theater in Aurora, Colo., and at Sandy Hook Elementary School in Newtown, Conn. Nieves, one of the most conservative lawmakers in the tea party-controlled Missouri state legislature, is currently pushing for lawmakers to override Democratic Gov. Jay Nixon's veto of legislation nullifying federal gun laws in the state. (...)

Sean Soendker Nicholson, executive director of Progress Missouri, questioned Nieves' decision to do the giveaway just days before the state's gun veto vote. He noted that law enforcement officers have urged lawmakers to uphold Nixon's veto of the law, which would not allow the enforcement of federal gun laws that infringe on Second Amendment rights.

"The idea that there is a sponsor level known as 'sniper' is troubling," Soendker Nicholson said. "Snipers are people killing people. It is terrifying and tragic."(...)

Nieves has raised eyebrows in the past for a series of reasons, including a Facebook post in July where he called liberalism a "mental disorder." And during a bizarre April email exchange with a constituent who asked to be removed from an email list, the state senator accused the person of being in love with him.

In 2010, Nieves was accused of assault by Shawn Bell, the campaign manager for the candidate Nieves defeated in the GOP state Senate primary. Nieves denied the accusation, and the Franklin County prosecutor did not file criminal charges, citing a lack of evidence.


This past spring, strangely similar pieces of mail started arriving at the offices of city attorneys in 28 Maryland communities. The tersely worded letters, many dated March 26, warned each town that some of its firearms laws were illegal and needed to be repealed immediately. Takoma Park's letter claimed that ordinances against carrying unlocked guns and possessing or selling guns in public places "grossly" exceeded state law and should be taken off the books, "out of respect for the rule of law." All of the letters warned that failure to comply would put the towns "at risk for a lawsuit." (...)

Both SAF and the NRA argue that navigating a maze of local gun laws is confusing: You can't expect gun owners to read the municipal code every time they cross a town line. However, it appears that some of the ordinances SAF has targeted have rarely, if ever, been used to prosecute gun owners. So why target them? "In many cases, laws are designed to set a tone and to provide guidance on the expectation of behavior," Benjamin explains. "During the 17 years since I was first elected mayor, we have never issued a single speeding or parking ticket, yet people seem in general to obey our traffic and parking control laws. Would it make any sense to repeal those laws because we have not prosecuted anyone under them?"

Never mind common sense. But let me end on a positive note. There is hope when more and more people and groups are speaking out and making their voices hear loudly. This new video by the American Academy of Pediatrics is powerful:

The Newtown families are asking for us to respect them on this upcoming emotional anniversary and to ask for people to be kind, to be courageous and to continue to raise our voices in support of common sense gun reforms that can change the way we protect our children and our families from the gun violence that has devastated our communities. Today, December 12th, there will be a vigil for gun violence victims at the National Cathedral in Washington D.C. This should be a very powerful event. You can watch it live streamed if you wish to participate in the event. There are several wonderful websites put together by the families and by Newtown family supporters:

And then remember that Saturday will be a day to remember the victims. Saturday will be a day to ring bells, light candles, have respectful conversations and urge Americans to remember that a national tragedy like the Sandy Hook shooting is a reminder that if we don't make our voices heard, it could happen again. It's time for the silent majority to make more noise than the extremist minority. It's time to ask our Congress to "Finish the Job" on expanding Brady background checks. It's time for a serious national discussion about gun violence and the American gun culture because what we have now is clearly not working.

I will #HonorWithAction on Saturday and every day. As someone who knows what's like to lose a loved one to the sudden and unexpected violent death by bullet, I will be with them all and wish for them the ability to move forward and to not let the country forget what happened last December 14th.
Posted by japete at 11:02 AM