Lessons about violence from Nelson Mandela

1) "Difficulties break some men but make others. No axe is sharp enough to cut the soul of a sinner who keeps on trying, one armed with the hope that he will rise even in the end."

2) "It always seems impossible until it's done."

I like the quote from the image on this post. "We owe our children, the most vulnerable citizens in our society, a life free of violence and fear." How much more appropriate could that Mandela quote be with the upcoming one year anniversary of the Sandy Hook school shooting on December 14th?

But our children continue to die too often from the violence of bullets. In America, these gun deaths are happening every day- on average of about 8 children a day die from bullets in gun homicides, suicides or unintentional shootings. This is not OK. Many websites and blogs are now keeping track of daily shootings. It is stunning that there is a need for us to talk about gun deaths in the context of our children. No one should die from a bullet. But our children are our future. When a child dies, we lose the potential of that child to grow into a productive human being. Our communities lose much when they lose children to violence. It is a statement about our society when our children are dying by violent means. Unfortunately, the deaths continue. The Kid Shootings blog is trying to keep track but there are so many that it's difficult. Joe Nocera's Gun Report posted in the New York Times is keeping track as well.

So I ran across this awful incident of the shooting of children that made me cringe. An Arkansas grandfather shot one adult, his 4 month old and 4 year old grandchildren and then himself. From the article:

Brown says although they initially believed the incident began in the driveway of a home just north of Alma on Tuesday afternoon, it actually began in the house when Tim Adams began to argue with his daughter over who would tend to her children while she appeared in court.

The daughter told Adams that Michael Williams, who was with her at the time, would look after them. After they argued about that, Adams walked out the front door with a shotgun, according to Sheriff Brown.

Witnesses said they thought Adams fired a warning shot into the air, but had actually shot Williams, who later died.

Adams' daughter ran outside and tried to keep him from shooting inside the car, but he ran around the other side of the car and shot 4-month-old Chastyn Williams. The only motive they have so far in these two killings is that Adams didn't like Michael Williams, and had even referred to him and the infant as "being demons," Sheriff Brown says.

Adams then shot his 4-year-old granddaughter, Kierra Adams, in the back after chasing her, her grandmother and another child out of a bedroom in which they had barricaded themselves.

What kind of person would call a 4 month old baby a demon? What was wrong with this guy? Who shoots babies? And why are there so many hotheads with guns? Was this man "law abiding" until suddenly he wasn't? We live in a culture of guns and incidents like this, though not many are this awful. But they happen every day. These are senseless deaths. Without the gun, the argument about something relatively small like who's going to care for the children, would be an argument with perhaps some scrapes or bruises. With a gun, an ordinary argument can turn deadly in an instant.

Mandela himself, at one time, thought violence was the answer. He changed his mind. Nelson Mandela had a lot of common sense and wisdom. He understood that if we don't protect our children from violence we are not doing our job as adults and leaders. If we follow his example, we will lead by making sure we are doing more than enough to keep our children safe from the devastating gun violence happening every day in our communities. Persistence changed the country of South Africa. Persistence in the cause to reduce and prevent gun violence can change America. We know it can't stay the way it is. We know that when one shooting snuffed out the lives of 20 young children in one place in several minutes, nothing can ever be the same. We know that our country is better than this. And we know that our leaders will eventually stop listening to the fear and paranoia of those who resist attempts to prevent the violence. Mandela fought against those who resisted non-violent solutions to integrating Black South Africans into the country's political and social system. His persistence won and the violence and racism began to change.

And how's that going in the U.S.? It turns out that Republican lawmakers are not allowed to praise Nelson Mandela. Really, I thought most everyone recognized Mandela's status as a great man. But I guess I would be wrong. From the article:

Peruse through comment sections of the GOP's Facebook tributes to Mandela, and there's a good chance you'll find plenty of vitriol for the former South African president and for the politicians who praised him.

Sen. Ted Cruz (R-TX) wrote that Mandela "will live in history as an inspiration for defenders of liberty around the globe." One commenter took a different view of the anti-apartheid leader's legacy, urging "all you Mandela lovers head on over to South Africa and see what's going on now that 'Mandela's people' have control of the nation." (...)

As Sen. Marco Rubio (R-FL) sees it, Mandela "showed South Africans and the entire world what the power of forgiveness truly means and can accomplish." It's unclear if some of Rubio's disappointed supporters will be similarly forgiving of the senator.

One woman found it "sad" that Rubio, a son of Cuban immigrants, showed such reverence given that the GOP senator's family "fled the very things that mandela (sic) stood for." After seeing the tribute, another woman said Rubio had lost her vote.

Good grief! Who are these people? Maybe the same intolerant bigots and extremists who write misogynistic comments on the blogs and Facebook pages of the gun violence prevention groups like Moms Demand Action for Gun Sense in America and right here on my own blog. These folks hate women and people of color apparently and now anyone who dares to support a great leader who deserves the respect of the world and pretty much has it. Let's check out just some of the ugly and offensive comments that promote violence on gun violence prevention sites ( from the linked article above):

The first is from pro-gunner Scott Dapson, who had some sweet nothings for Shannon. “You Are the biggest asshole I’ve ever heard that’s trying to sissify America,” he told her. “guns are good asshole!”

Indy Southsider CommentNot to be outdone was a pro-gun activist going by the moniker “Indy Southsider.” Getting right to the point, he told Shannon, “I personally feel you and your kind should lose your citizenship and be removed from this country.” He then politely added, “Furthermore, i sincerely hope that you are your family soon meet with a horrible and painful demise … You will be hearing from me again, on the battle front..”

Joe Mama CommentThen there was gun aficionado “Joe Mama,” whose message was targeted seemingly not just at Moms Demand Action, but women in general:  “Have you ever heard of the 2nd amendment? what the hell is the matter with you people? get back in the kitchen and take those damn shoes off! its people like you that are going to destroy our 2nd Amendment right. stupid bitches!”

Nice, right? There are a small minority of mean and angry folks who appear to have nothing better to do than troll blogs, Facebook pages and articles where they think they can say anything. Interestingly, many of them leave their own names. They must be so proud of what they write. But, like Mandela, we are persistent and will not be dissuaded by these ugly folks. Raise your hand if you think this is the kind of discourse we deserve and need in our country when it comes to saving lives. I thought so. Not many of you are raising your hands. I would also like to say that these are the people with the guns. Are they law abiding citizens who believe that threatening and demeaning another person is a good idea? Some of the daily shootings in America result over insults like this. I have written about them many times here.

But I digress. What was I talking about again? Oh yes- how violence can be lessened with laws that make it harder for people to be violent or use weapons to inflict violence on others. After the violence of the 1980s and 1990s in South Africa, the government decided to strengthen gun laws to reduce some of the incidents of violence. Attention was paid to South Africa's gun laws and gun deaths after Oscar Pistorius shot his girlfriend. The linked article above writes about that and about the gun regulations that seem to be working in South Africa:

In order to legally own a gun in South Africa, first the prospective owner undergoes a thorough police background check which involves an interview with the spouse or partner as well as two other people. Then there is a competency requirement which encompasses training as well as a criminal record screening.

"On top of that, the police have the discretion to give a licence or not and the applicant has to explain comprehensively why they have to own a firearm. Put it this way, it's a lot easier to get a shotgun licence in the UK than it is in South Africa," Mr Hood told Channel 4 News. (...)

"The latest statistics we have is that the killing of women in intimate relations has halved from 1999 to 2009. What has come down here is killing with a firearm and so from that we learn that if we bring in tighter regulation, down the line there is the direct, causal saving of lives," he said.

Yes, firearms make it all much easier. As in America, South Africa struggles still with violence and crime. But they passed laws and have taken measures that have made a difference. They understood that taking measures to prevent violence, after their violent history, just makes common sense.

The words of Nelson Mandela are important. So back to the beginning of my post:"It always seems impossible until it's done." Nelson Mandela changed his country and in many ways changed the world. He reached for the impossible. It's time to make some changes in America as well. Thank you Nelson Mandela.

I want to add this image of Nelson Mandela made by the Coalition to Stop Gun Violence: 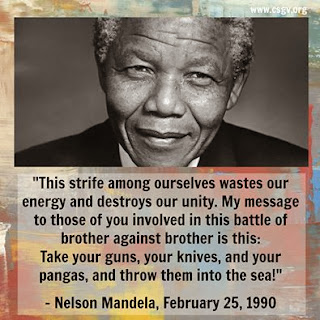