You just can't make some of this stuff up

This post has been updated since first posted to include more information about George Zimmerman's latest escapades with guns.

I can file a good many of the stories and incidents about which I write under "you just can't make this stuff up." So let's check a couple of those stories that fall under that label.

First, this grandfather gunned down his 23 month old grandson in his driveway:

"Deandre, 23 months old, of Norcross, was shot and killed Tuesday night, allegedly by his grandfather, Cpl. Jake Smith said. The toddler was not the intended victim, Smith said.

“At this time, we don’t think he intended to actually shoot that child,” Smith said at the scene Tuesday night. “But we do believe he was trying to shoot someone else that was here.”

Luis Efrain Torres, 39, was at his home in the 5200 block of Stafford Drive, near Indian Trail Road, when investigators believe he got into an altercation with Deandre’s father. Deandre and his parents weren’t currently living with Torres, but previously had, police said Wednesday."

Self defense? There was an argument. A toddler was present. Do you shoot when a small child is right in front of you? And the child is your very own grandson? In what kind of paranoid and fearful world do these folks live? Had a gun not been available, this innocent child would not be dead. Altercations don't have to end in death. And further, how can a child protect himself from stupid and angry adults? And one last important question? Was Torres a law abiding gun permit holder?

The Texas Open Carry group has issued a ( sort of) apology to the group of 4 women gathered for a meeting for Moms Demand Action for Gunsense in America. But read the words and see if you think they actually understand what they did and why such a fuss was made about their actions:


Because these MDA members seemed to have no issue being around 1200 armed Americans, we falsely assumed that a weekly rally of just a few dozen members would be just as well received. We didn’t realize that counter-protests were only permitted in certain situations or by certain people and will adjust our future efforts to be in line with these rules. It was never our intention to intimidate or harass four peaceful women as they exercised their 1st Amendment right to assemble and we apologize that our peaceful 2nd Amendment rally caused them to feel that way.

OCT can appreciate that there are people that simply don’t like the sight of guns in public and work very hard to ensure that our actions don’t intentionally or accidentally cause people to feel alarmed. We encourage our members to smile, refrain from being confrontational, and dress in a friendly and approachable manner.

While MDA fired the first shot – figuratively speaking – we will no longer hold our walks where members of MDA are holding their membership meetings.  We also recognize that we may have ruined these women’s lunch last weekend. In the spirit of forgiveness and community, we would like to offer the Texas chapter of MDA a $100 gift certificate to the Blue Mesa Grille to hold another lunch meeting unmolested.  We will not have any armed members present to ensure that there is no further misunderstanding about our intent or your emotional resilience upon seeing such people.  Please accept our apologies and our efforts to make it right.

Good grief. This guy thinks a gift certificate will make up for the stupidity of his group. Yes, OCT, there are people who don't want to see your loaded guns in public. It's just not cool. And smiling while armed to the teeth with an assault rifle? That should make it all better all right. I do think that dressing in the right clothing is also important. I mean, when you confront totally innocent and unsuspecting folks with your guns, people will generally forgive you and find you sane and safe if only you are wearing a tie and a nice pair of pants. That just makes common sense, right?

And then there is the push back on the pro gun extremists for posting incendiary and offensive remarks on various articles and websites about President Obama's recent visit to Dallas, the site of President Kennedy's assassination. Check out this blog by a pro gun writer attempting to lighten what is going on:

You and I know none of these pro-gun commentators were serious about harming the president of the United States, thereby fomenting insurrection. We also know that the First Amendment of the United States Constitution protects their right to make these comments, despite various laws aimed at curtailing that speech in the name of public safety (e.g. Missouri’s Chapter 574 Offenses Against Public Order Section 574.115).

BUT…GRAA-Texas doesn’t have to publish them. In fact, they posted this warning on the site, after the pro-assassination musings hit their servers. 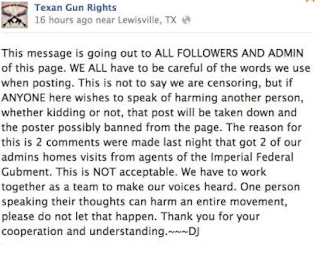 Do we know that these folks weren't serious about harming the President? I don't think we do. No wonder some of them received a visit from the authorities. These are the guys with the guns, remember. There's more than enough to go around to "harm an entire movement" of late. And what exactly is that movement? Is it to fight against your own government and your own President? Or what are the intentions of these folks anyway? I think the question needs to be asked and then answered.

And finally, but I'm sure not the last of the unbelievable things happening in gun world, our friend George Zimmerman has been arrested once again. This law abiding gun owner just doesn't seem to know how to control himself. From the article:

A Seminole County Sheriff’s Office statement says Zimmerman was arrested Monday afternoon after deputies responded to a disturbance call at a house in Apopka, about 15 miles northwest of Orlando. Zimmerman will be transported and booked into jail.

The statement provided few other details, and it was not immediately known what charges he faced.

Monday’s arrest was just the latest legal trouble for the former neighborhood watch volunteer, who was acquitted earlier this year of all charges in the fatal shooting of Trayvon Martin.

It turns out that George Zimmerman, the new poster boy for concealed carry permit holders, Stand Your Ground and domestic abusers, has aimed a shotgun at his girlfriend in an "altercation":

George Zimmerman has been arrested following a domestic disturbance call this afternoon that came from his pregnant girlfriend who said he pointed a shotgun at her.

He now faces one felony charge of aggravated assault with a weapon and two misdemeanors after pushing his girlfriend outside of her house and destroying a piece of furniture in the backyard.

Zimmerman was picked up by police in Apopka at the intersection of Topfield Court and Bonnie Drive shortly after 1pm on Monday. (...)

'She and George Zimmerman were having a verbal dispute and at that time she indicated that he broke a table and pointed a long-barreled shotgun at her,' Sheriff Eslinger said.

'She was obviously very concerned.

Yes, very concerned. We all know that George Zimmerman shot one person already. It seems as if he just can't keep away from his guns and his anger problem is enough to make anyone concerned.

Yes, there is something wrong with a country that allows George Zimmerman to have guns as this headline says. But this is the country we have. It's not the country we want or deserve. From the article:


Guns are routinely advertised in this country with hypermasculinized power fantasies, even going so far as promising to restore your supposedly lost manhood. Little wonder then that abusive men, who are the epitome of those who use violence and control to establish their masculinity, frequently turn to guns as weapons to hurt and dominate their victims. Harvard researchers have discovered that batterers who own guns frequently use them to threaten their partners into compliance. Having a gun in the mix when there is an abusive relationship makes the relationship way more dangerous for the victim. A woman is five times as likely to be killed by an abuser if there's a gun in the house, leading to 46 women a month getting shot to death by their partners or former partners. Notice I say "in the house." Conservatives often like to tout gun ownership as a solution for women enduring domestic violence, but it's distinctly bad advice to tell a woman who is being routinely hurt and threatened to bring a gun in proximity to a man who is very likely to use it. (...)

Is there a way to make it easy to get as many guns as you want without making it a gun bonanza for people who find them attractive as totems to express their unjustified paranoias and their desire to instill fear and obedience in the people around them? It doesn't really seem that there is, which is why so many other countries have decided to lower their murder rates with extensive bans and guy buyouts, to great success. To be blunt, there's a problem with any legal regime that allows a George Zimmerman, after all that has happened, to still have a gun with which he can threaten his girlfriend. This country needs to get to fixing it.

Great advice. People like George Zimmerman are dangerous. They should not have guns but we have made it easy for people like him to have guns and to carry them around with them in public places.