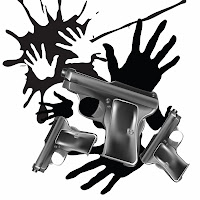 A lot is going on in the world of guns and gun violence. Particularly in the last week or so. Let's take a look at what's been going on.

I already wrote about the shooting at LAX airport. More information is coming out about the gun used and where the shooter got the gun. It appears in early reporting that it was a legally purchased assault rifle that, had Governor Brown vetoed a recent bill to ban these types of rifles, would be unavailable for sale. We need to have good information about the guns used in these shootings. Guns matter. Most especially guns designed to kill a lot of people at one time, as was the gun used by the LAX airport shooter. This report from the Violence Policy Center contains a lot of information about assault type rifles, commonly used in many of our recent shootings. From the report:

Legislation passed by the California legislature banning the sale of semiautomatic centerfire rifles capable of accepting a detachable ammunition magazine would have addressed the “bullet button” issue and ended the gun industry’s ability to circumvent the intent of California’s assault weapons ban. The legislation was vetoed by Governor Jerry Brown on October 11, 2013.

According to news reports, the Smith & Wesson assault rifle used by Ciancia was legally purchased in California from a federally licensed firearms dealer, the Target Range Gun Store in Van Nuys. It has not been reported whether it was a “bullet button” assault rifle or not.

More information will likely be forthcoming about this gun. But meanwhile, there is a lot of information in the above Violence Policy Center report about the terminology used by the gun rights advocates and by the gun violence prevention advocates. In the end, a gun is a gun. Does it matter if we call the rifle used in the LAX shooting, the Aurora Theater shooting, the Sandy Hook shooting and all of the others, a "modern sporting rifle" or an "assault rifle"? Lives were lost needlessly. The cynical attempt by the gun lobbyists to change what we call guns to make them acceptable is just plain ludicrous. I say we call these guns what they are- military style assault rifles. That was their original purpose. That was what the gun industry called them until they got the idea that the public really doesn't like assault type rifles being used to shoot children and others in regular shootings. We know about the damage they are capable of inflicting on human bodies. It's time for us to stop equivocating about our serious national public health and safety crisis and deal with the causes and effects using the facts.

The facts are that Americans are shooting other Americans with such regular frequency in public places and in homes that is becoming a national daily tragedy. What will we do about this? Nothing? Or will we stop letting the fear and paranoid rhetoric of the gun rights extremists lead the national conversation? It's time for a change and for some common sense about guns and gun violence prevention. For that's what this is about- saving lives. The gun rights crowd would like us to think that more guns and more guns in public places is the answer. They throw in the idea that any gun law, unless it's the one they like, will affect their rights to own guns. This is not true, of course, because the laws proposed are reasonable laws supported by even their own gun owning and NRA member friends. Those folks understand that their rights come with responsibilities and that Americans have a right to be free from the gun violence that is devastating communities everywhere. The facts show that the corporate gun lobby reasoning is faulty and it has led us to reject common sense laws in favor of looser laws. We are not safer as a result. Just look at what's happening on a weekly basis.

A South Carolina mass shooting barely made a blip on the national news radar. Six people died in a typical murder/suicide. Common in America but not other countries. This is avoidable and senseless.

Joe Nocera of the New York Times wrote his weekly Weekend Gun Report last week-end, including the shooting at LAX. By my count, ( this was not easy to do and I think I got it mostly right) there were 58 shooting deaths and 104 shooting injuries over the last week-end. They took place in 34 different states and some states had multiple incidents. The shootings were child shooting accidents, domestic shootings, gang shootings, suicides, murder/suicides, street fights, shootings in cars and homes and even an accidental shooting right here in my home town at a shooting range.

A New Jersey area 20 year old brought what appears to be an AK-47 type rifle to a shopping mall and started firing his gun. In the end, he shot and killed himself. He stole his gun from his own brother. Luckily for all, no other shoppers or employees were shot on this young man's way to his own suicide by gun. But this is a scene that we can all understand because it is happening a lot in our country. We get the young man dressed in black with a rifle shooting up airports, movie theaters, schools and shopping malls. It is becoming an American tradition. Though no one was hurt besides the shooter, this incident occupied law enforcement and terrorized shoppers and store employees for hours before the body of the shooter was found:

Mr. Shoop was found with a firearm that was modified to look like an AK-47 assault rifle, Mr. Molinelli said.

“It was a lawful weapon that was owned by his brother,” he said. The authorities said they believed Mr. Shoop stole the gun before heading to the mall.

Mr. Shoop fired at least six shots, the authorities said, and although no bystanders were injured he caused widespread panic.

“Thousands of people began to run out of the mall,” Mr. Molinelli said. “At least 400 patrons were locked into whatever store they were in at the time.”

Officials said the mall would be closed on Tuesday.

The resources required to deal with this matter are costly. If others had been shot and injured or killed, more would have been expended, costing taxpayers in actual dollars and friends and relatives of victims in grief and emotional trauma.

As it turns out, gun violence costs America a lot of money. $16 billion dollars in 8 years time to cover the costs of gun injuries should be eye opening. Since 2008, when this research into the costs ended in this study, there have been many many more shootings and mass shootings. The pain, grief, cost, inconvenience, emotional and physical scars and long-lasting affect of living with gun injuries is just not worth the controversial politics of gun policy. It should not be controversial to want to save lives, to save money, to save families from grief and long-term suffering, to keep our children safe and to prevent the daily devastation of gun violence. We must be better than this.

It needs to be said that we have a serious problem when people who shouldn't have guns have easy access to them anyway. New information about the gun used at the New Jersey mall by a suicidal young man points to serious problems with our country's gun culture and gun laws. From the article:

A conflicted portrait emerged of Shoop on Tuesday. A well-liked and hardworking young man, he also had a history of minor run-ins with police. Authorities said he never should have had access to the gun that he calmly carried into the state’s largest shopping mall, striking fear into hundreds who remained trapped inside for hours.

Shoop tried to steal the same rifle once before, on Jan. 1, resulting in a fight that led to simple-assault charges against his brother and the confiscation of the gun, Bergen County Prosecutor John L. Molinelli said. The charges were dropped and the gun was ordered returned in September when Kevin Shoop assured authorities that he would keep it secured, Molinelli said.

The prosecutor said it appeared that the gun was not locked up Monday, “at least securely enough,” when Richard Shoop took it from the house.

Hours later, the rifle became an instrument of terror, leading to a massive manhunt while hundreds of patrons and employees at the mall were locked down for hours. Shoop, dressed in black and wearing a motorcycle helmet, looked people in the eyes as he strutted through a main concourse of the mall, telling people not to worry, that they were not his target. (...)

The gun used in the shooting had been returned to Kevin Shoop by Superior Court Judge Donald R. Venezia because he had no criminal convictions or restraining orders, Molinelli said. Richard Shoop testified in court that he was not a victim of domestic violence and was not afraid of his brother, Molinelli said.

Molinelli said the judge had not had much choice.

“There are but a limited set of circumstances whereby a court can order the gun not to be released,” he said. “Unfortunately, none of those reasons focus on what the gun might ultimately be used for such as what occurred last night.”

Kevin Shoop said Tuesday night that when he recently got his gun back from police, a lock designed to keep the gun from firing was broken. He then stored the weapon in a case in his closet.

This bears repeating. "Authorities said he never should have had access to the gun......."