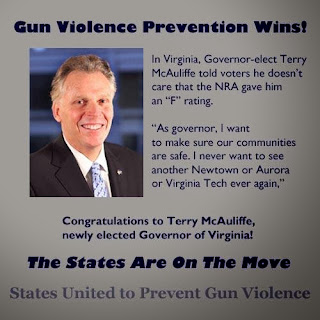 Yes. Elections matter. Virginia Governor elect Terry McAuliffe, stood up to the NRA lobbyists and said he didn't care about their "F" rating. And he won anyway. This should be a lesson to politicians but so far the noise of the NRA is still muting the obvious conclusions. Common sense measures to save lives are more important than giving in to the fear and paranoia of the corporate gun lobby. There have been a number of articles written about what happened in last night's election. But until the conversation changes on a national level we will still see our candidates and politicians running away from the issue of gun violence prevention under the mistaken impression that they can't win if they are in favor or protecting our communities from the violence that devastates way too many people. From one article in The New Republic:


"Did you hear about the big bellwether election for gun control politics on Tuesday? A candidate with an F rating from the NRA who was bold enough to openly support universal background checks and limits on ammunition magazines won in a purple state with a strong gun culture, the home of the NRA. Pundits everywhere are ready to make grand proclamations about what the result will mean for the gun issue nationwide, just as they did when two Colorado state senators who supported tougher gun restrictions were recalled in a September election that involved vastly fewer voters.

Actually, only one part of that paragraph is accurate. Terry McAuliffe is the next governor of Virginia. But very few pundits have been framing the race as having anything to say about the state of the gun control cause, despite McAuliffe’s remarkably forthright support for tighter gun restrictions, which included proudly touting his F rating in a debate with Republican Ken Cuccinelli. Most summaries of the race make zero mention of the gun issue at all, despite the fact that both sides of the issue have engaged heavily in the race, with the NRA spending $500,000 against McAuliffe and Mayors Against Illegal Guns, New York Mayor Michael Bloomberg’s group, and Gabby Giffords’ Americans for Responsible Solutions spending roughly $2 million combined."

Elections matter. Virginia is a red to turning purple or even blue state. There are a lot of gun owners in Virginia. The NRA headquarters is located in the state of Virginia. But polling shows that most Virginians are in favor of stronger gun laws. From this New York Times article about the election and polling:

Surveys show a mixed picture. A Quinnipiac University poll of Virginians this year found that 66 percent supported placing armed police officers in every school, and 50 percent believed that gun ownership helps protect people from crime. Only 41 percent believed that owning a gun puts them at risk.

This bears repeating. "... margins of support for requiring background checks on purchasers at gun shows (92 percent), banning assault weapons (58 percent), prohibiting high-capacity magazines (59 percent) and reinstating the one-gun-a-month limit (60 percent)" So Governor elect McAuliffe will be doing the bidding of the majority of voters and citizens and not of the minority of gun rights extremists who oppose any gun law just to oppose it. Gun violence prevention organizations got involved in the Virginia Governor's race and some down ballot races as well. The Brady Campaign endorsed McAuliffe and others who ran on common sense gun measures:

Statement of Dan Gross, President of the Brady Campaign to Prevent Gun Violence

“The election of Terry McAuliffe as Governor of Virginia in a race with a high turnout, and high stakes is yet another demonstration of the changing tide on the gun violence issue.
In a swing state that is home to the NRA, Governor-elect McAuliffe campaigned on his strong support for sensible gun violence solutions like extending Brady Background Checks to all gun sales.  He wore his "F" rating from the NRA like a badge of honor, demonstrating the overwhelming support that Virginians, like all Americans, have for sensible solutions to gun violence.  Make no mistake this was a voting issue for Virginians. The Brady Campaign was proud to endorse Governor-elect  McAuliffe, and we look forward to working with him to help make Virginia safer for its citizens."

Americans for Responsible Solutions also got involved in the election, spending more money than the NRA on the Virginia election. This is a first. From their website:


“The extraordinary thing we were able to do in Virginia – in the backyard of the gun lobby – was to hold candidates accountable directly on their positions of gun violence prevention rather than broader campaign themes in the race,” said Pia Carusone, executive director, Americans for Responsible Solutions PAC. “This was a multipronged program where we were able to predict and validate a voter’s support on gun issues and the voters’ movement toward our candidates.” (...)

A survey released this week by Public Policy Polling of 870 likely Virginia voters from November 2-3 found that messaging on gun violence prevention issues was helpful in the race for McAuliffe. “Asked how Cuccinelli’s opposition to expanded background checks factors into their vote, 47 percent said that position makes them less likely to vote for him, as opposed to 18 percent who said it made them more likely to do so,” reported Politico. [http://politi.co/1ff5s8S] “When asked whether they had seen or received any advertising on the gun issue, just under half of all those surveyed — 47 percent — said they had, compared with 40 percent who hadn’t.”

Candidates can win without the support of the NRA lobbyists. And this PPP polling (above) shows that actually, a position supportive of common sense gun laws wins votes. There is nothing to fear for candidates. It's time for a change in campaign talk about guns and gun violence in order to protect our communities from the devastation of gun violence. Other candidates should pay attention to what happened in Virginia going forward to 2014 and 2016.

Other groups supported the election of Terry McAuliffe as well. From the Coalition to Stop Gun Violence:


“The prevailing view among pundits after the Colorado recall elections was that no candidate would ever dare campaign on the issue of common-sense gun reform again,” said Coalition to Stop Gun Violence (CSGV) executive director Josh Horwitz.  “Maybe they should have waited a couple of months before carving that dubious theory in stone.” (...)

“Coming off the 2012 elections, this is just further confirmation that the NRA is a paper tiger,” said Lori Haas, CSGV’s Virginia Director and the head of Virginians for Responsible Gun Laws, a project of CSGV’s sister organization, the Educational Fund to Stop Gun Violence. “For all their supposed political power, the gun violence prevention movement outspent them in this election and out-organized them on the ground where it counts the most. And this is just the beginning.”

Moms Demand Action for Gunsense in America also weighed in on the Virginia election:


Last month, Moms Demand Action for Gun Sense in America announced its endorsement of Terry McAuliffe following the final gubernatorial debate in Blacksburg when McAuliffe professed boldly, “I don’t care what grade I get from the NRA. I never want to see a Newtown or Aurora or VA Tech happen again.” (...)

“Moms Demand Action applauds Governor-elect McAuliffe’s victory as a win for all Virginia families, and we know this win will give other candidates the courage to support common-sense gun reform legislation without feeling threatened by the gun lobby. Clearly, the NRA’s power is waning.”

This, of course, is not the first election cycle where the money and influence of the NRA hasn't worked out. Check out what happened in 2012. And even before that, the myth has persisted that the NRA lobbying efforts have affected elections but when that common misperception is examined more thoroughly, as this series of articles by Paul Waldman forThink Progress( here, here and here) did, we learn that the myth is just that- a myth.

Congratulations to Governor elect Terry McAuliffe. And we know we can be better than the failure of our elected leaders to challenge the prevailing view that you can't stand up to the NRA and win elections. You can. Enough is enough of the myths about the influence of the corporate gun lobby in American politics. It's time for the change Americans want and deserve. Let's get to work.