How to carve your Thanksgiving Turkey 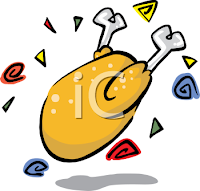 I'm always looking for better ways to carve the turkey on Thanksgiving. It is an art actually. For some years now my husband has been the designated carver. He does a really good job. This year we are spending Thanksgiving at our newly remodeled cabin where we now have room to host the whole family and cook a Thanksgiving dinner. We are really looking forward to this new experience.

So back to the turkey carving. It does take a really sharp knife and some technique. So I'm sure my husband could use a little advice. I'll bet he could get it from the guy in this video who has tips for carving a turkey his way- the gun rights way- or something. Anyway, watch the video:

Right. This guy sure got a kick out of his shenanigans. The thing is, he mentioned at about 2:20 or so into the video that you could see the damage done to the soft tissue. Since we all know that no one is going to "carve" a turkey by shooting the raw bird, this reference must have been for how well one can inflict soft tissue damage on a human being. Or did he mean to a deer perhaps? Does one want to do a lot of soft tissue damage to a deer? What would be left of the deer for eating? I don't know. I'm just asking. Why would he mention this at all? A .460 Magnum is a powerful gun all right. He made his point but he had to carry on for 4 minutes showing the slow motion video of the turkey exploding over and over again. I'm sure the video was meant to be funny. It's pathetic actually.

So on to the real thing. Most people don't shoot their turkeys. They buy them in a store and then find ways to cook them. There is no birdshot so no worries about harming your teeth while eating.

I have noticed that a lot of people have been reading my post from last year about the brutal shooting of two Minnesota  teen-agers last Thanksgiving. Here is an update about the shooter and what has happened since last year at this time:


An attorney for Byron Smith, 65, argued in Morrison County District Court on Friday that there is not enough evidence to support the indictment against his client, and it should be dismissed. Attorney Steven Meshbesher also argued that prosecutors committed misconduct during grand jury proceedings and that there were other flaws in the case. (...)

Prosecutor Pete Orput said the defense's line of questioning is a "fishing expedition."

Judge Douglas Anderson will give attorneys until November to file written arguments, then he will make his decision on whether the charges should be dismissed.

The shooting stirred debate about how much force homeowners can use when protecting property.

Court records say there were several minutes between the shootings of the two teens, and their bodies were in his house for a day before authorities were notified.

Smith has been out on bail. This case has been the subject of discussion about self defense so it will be interesting to see what the judge will decide. The case is obviously not settled yet and several families in Little Falls, Minnesota will have a very different Thanksgiving this year than they had last year. The long term affects of one shooting are far reaching.

And this has just been reported by Minnesota news sources- a judge has ruled against Byron Smith's attempt to get his case dismissed:

(...) Washington County Attorney Pete Orput, who is prosecuting the case, said the evidence will show that Smith went far beyond self defense.

"When you look at the elements of self defense or even defense of dwelling, any use of force to stop a crime from being committed has to be reasonable and necessary," Orput said.

It would have been ridiculous and more if this case had been dismissed. The shooting appeared to be more than self defense in the eyes of most people. But the trial will bring out the details and a jury will now get to decide on the outcome for Byron Smith. Needless to say, his Thanksgiving will not be so happy this year.

And oh, by the way, the family of this Texas woman, shot while minding her own business watching TV in her hotel room, will be having a really bad Thanksgiving this year. From the article:


48-year-old Traci Lynn Reedy, of Irving, Texas, was with her husband and teenage son in a motel room at the Mictorel Inn and Suites in Irving. Traci was in bed, watching television when a bullet fired from an adjoining room came through the wall and struck her in the chest.

Guns are dangerous and should not be handled recklessly or irresponsibly. Unfortunately, incidents like this happen all too frequently. For some reason, some gun owners feel the need to be handling their guns in places where they shouldn't. What's that all about? If you don't believe me, check out the Ohh Shoot blog for more incidents like this one.

I could write about many more families who will not be enjoying their Thanksgiving dinners this year but there is hardly space to do so. If you want to check it out, though, read Joe Nocera's Gun Report for actual shootings of actual people in the last few days. As always, the many shootings have affected families of 2 year olds, 17 year olds, 30 year olds, 22 year olds and others in states from North Carolina, to Alabama, to Michigan, to New Hampshire to Pennsylvania to Minnesota to California, Texas, Missouri and more. 32 Americans a day are murdered by bullets. 250 Americans a day are shot in gun homicides, suicides and unintentional shootings. Of those, 80 a day die. Imagine the far reaching affects of such violent deaths on families and communities all over our country. Think about this while you are enjoying your Thanksgiving dinner with your own families. There are empty chairs at the tables of many people in our county. It's time for this to change.

So I have some advice to my readers. How about talking turkey to your friends and family about gun safety and gun violence prevention? Here's how you can do it. Follow the advice of Demand Action. The website posted some of the myths touted by the corporate gun lobby and the facts that counter the myths. It's important to talk turkey and speak the truth. Lives depend on our getting this right. So, this Thanksgiving, as always, we can hope for common sense with guns and hope that there won't be more senseless and avoidable shootings.

Or go to the website of the Brady Campaign and watch the newly released video about how easy it is for anyone to buy a gun in our country. Then contact your Representative and ask him or her to sign on to the bill to require background checks on all gun sales. It's "easy peasy" as the child's voice in the video says. In case you missed it, here it is again:

Kids often know better than the adults in their lives and sometimes it takes a kid's voice to call attention to our problems. For it is for our children that we need to change the way we are doing things. We can save lives if we choose to do so. Why wouldn't we?

Happy Thanksgiving. Be careful out there when carving your turkey.
Posted by japete at 6:44 AM