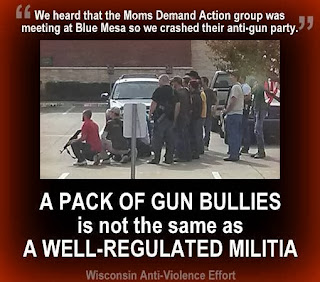 I'll get to the topic of the photo on the left in a minute. But first, just when you think you've heard about shootings in every public place, a new one happens. Yes, people shoot other people while they are skating at public skating rinks. Bryant Park in Manhattan is the scene of a shooting last night. From the article:

"Pandemonium broke out in the heart of Manhattan on Saturday when two men were shot on the ice at the popular Bryant Park skating rink just after 11 p.m., the police said.

A skater, Francis, 17, who gave only his first name, said he was behind one of the victims when the shots were fired. He said the shooter was standing among tourists who were taking pictures outside of the rink. Then he pulled a gun."

Another report about this incident reflects what people think when incidents like this happen because they are happening with such regularity:

Krishnamachari said he heard three shots ring out and saw skaters down below scramble for safety, while one person lay immobile on the rink. He said restaurant patrons were told to lie on the floor and eventually were ushered to a back room.

"We didn't know anything. The shooter could've been a lunatic with a machine gun," he said.

Indeed. It's just another "peaceful" night in America. If you don't believe it, just read my favorite site- The Gun Report by New York Times writer Joe Nocera. No doubt he will write about this one in his next Week end Gun Report. In that weekly week end report, Nocera typically highlights dozens of shooting incidents in any and all 50 states over just 3 days time. They include homicides, "accidental shootings", murder/suicides, domestic shootings, gang shootings, shootings everywhere and anywhere. It's stunning and reflects the senseless and avoidable carnage in American communities.

But back to guns at skating rinks- I guess the gun nuts will now say they need to carry their guns while skating with their families to protect themselves from other people with guns at skating rinks. This is nuts. One of my favorite satire writers, Andy Borowitz, who writes for the New Yorker, wrote this recent piece:

A new study released today indicates that Americans are safe from the threat of gun violence except in schools, malls, airports, movie theatres, workplaces, streets, and their own homes.

Plus: driveways, garages, gyms, stores, military bases—and a host of other buildings, structures, and sites.

Humor has a way of showing us how ridiculous reality sometimes is.

But not so funny is that in Minnesota, the weather is becoming almost cold enough to start flooding pleasure and hockey rinks. My kids grew up close to a school where there were outdoor rinks. They spent hours at night and on week-ends enjoying skating and hockey. We spent hours freezing in our Sorrel boots and down jackets watching our son play youth hockey and later at indoor rinks playing high school hockey. We all have fond memories of those days. Now my grandchildren are enjoying skating and hockey. Of course, the thought that someone would bring a gun and shoot people at a rink was not even on the radar. In those days, not that long ago, people didn't carry loaded guns around in public. The NRA lobbyists hadn't managed to get their agenda of more loaded guns in more public places past our legislators yet. It wasn't thought to be necessary to have guns everywhere. But things have changed. Given money, fear, paranoia and a very organized group of gun rights extremists with an agenda, we now have guns everywhere we go. And, mind you, many of these guns are not carried by criminals and gang members.

Yes, there are shootings by felons and people who are adjudicated mentally ill, or domestic abusers who shouldn't have guns but can easily access them anyway. But most of the shootings are people who know each other and many of the guns are legally obtained. Legally obtained includes private gun sales with no background checks. Those sales are legal because we have not made them illegal, as we should. Guns go easily from the legal to the illegal market because of our weak gun laws. We could change that if we had the will to do it. That would make common sense.

But never mind common sense. Until we stand up to the crazy and flawed arguments of the gun rights extremists, we will continue to have folks with guns in public places shooting innocent people while skating, shopping, checking in at airports, driving their cars, sitting in their cars, walking around in neighborhoods at night, and in every nook and cranny of our communities. We are not safer with more loaded guns in more public places. As long as we have a culture that promotes and allows guns everywhere, there will be guns everywhere.

And while I'm on the subject of more loaded guns in more public places, let's take a look at the photo at the top left of my post here. Some Texas gun nuts decided that a small group of women representing Moms Demand Action for Gun Sense were a threat to them. This group of Moms was at a local restaurant having a meeting. They must be quite frightening. I mean really. What's more scary than a group of women who are trying prevent the daily carnage of gun violence in our communities? I don't know- maybe a bunch of gun bullies, armed and ready to shoot the women? Look at the photo. What does that look like to you? Doesn't it look like these guys were armed and at the ready? Several are crouching down just waiting for the women to come outside so they can make their point; all over a non-violent unarmed small group of Moms? The gun nuts are out of control in America. And what is their point exactly? Is it that if you dare do anything to challenge their flawed view of the second amendment they will shoot you? I thought we lived in a country where Democracy is practiced. I wrote about this in my last post and have written about it many times before.

These extremists are being fueled by the far right rhetoric coming from conservative talk radio and T.V. and the corporate gun lobby. And you've just got to love the quote from one of the gun bullies: " We heard that the Moms Demand Action group was meeting at Blue Mesa so we crashed their anti-gun party." Really? Anti-gun party? When a bunch of guys with guns crash a party it's quite different from, say, the Wedding Crashers. The intent is clearly not to have a good time unless you think that having a good time is intimidating innocent people with loaded guns.

In any other country, this looks like war. In America, it's just another day where armed Americans can legally show up looking like this and get away with it. Is this "Standing Your Ground"? What if someone had decided to act and pull the trigger in their apparent hatred of people who are organizing to stop shootings? It could happen.

We are better than this. I say enough is enough. If this photo, included in my post, doesn't tell the story of the American gun culture gone wrong, I don't know what does. It's time for a change. Let's get to work.

At least two people were killed and 22 hurt in a shooting at a house party packed with young adults near Houston, Texas, police told US media Sunday.

Police are looking for two suspects in connection with the shooting late Saturday in Cypress, a suburb of Houston, Christina Garza at the Harris County Sheriff's Department told CNN. (...)

"As you can imagine, this was chaos in a residential neighborhood. This was a private home where they were hosting a house party," Garza said.

There were at least 22 people rushed to five area hospitals, though some had minor injuries, the Houston Chronicle reported, citing the sheriff's office.

More than 100 people were at the house celebrating a birthday, the Chronicle said.

Garza said that there was at least one adult in the house at the time, and that most partygoers were older teens, with some in their early 20s.

Yes, as it turns out, we can imagine the chaos. It is happening every day and happening with more regularity. Do our elected leaders read these stories? What are we going to do with this? Where do these young people get their guns? Why bring a gun to a birthday party? Because they can. Because our American gun rights extremists are encouraging everyone to have guns. Because our politicians are afraid to speak up and say that is a terrible idea. There shouldn't be 2 dead and 22 injured at a teen/young adult birthday party.

Other media sources are picking up the story of the gun bullies outside of the Texas restaurant. This story from Huffington Post is a good one. From the article:

According to a spokeswoman for Moms Demand Action (MDA), the moms were inside the Blue Mesa Grill when members of Open Carry Texas (OCT) — an open carry advocacy group — “pull[ed] up in the parking lot and start[ed] getting guns out of their trunks.” The group then waited in the parking lot for the four MDA members to come out. The spokeswoman said that the restaurant manager did not want to call 911, for fear of “inciting a riot” and waited for the gun advocates to leave. The group moved to a nearby Hooters after approximately two hours.

MDA later released a statement calling OCT “gun bullies” who “disagree[d] with our goal of changing America’s gun laws and policies to protect our children and families.” The statement added that the members and restaurant customers were “terrified by what appeared to be an armed ambush.” A member of OCT responded by tweeting, “I guess I’m a #gunbullies #Comeandtakeit.”

Yes. An armed ambush. That is about right. Who needs it? The Open Carry movement thinks they are "normalizing" the carrying of holstered handguns and assault type rifles in public. But when the daily shootings continue, why would anyone think this is normal and will not result in death and injury? These guys are making total fools of themselves and are certainly not helping their own cause, whatever that may be. But they just can't seem to help themselves. They are bullies and apparently proud of it. I wonder what their wives, girlfriends, kids, and other relatives and friends think about this activity? Don't people have better things to do with themselves than intimidate and harass innocent people with their guns?
Posted by japete at 9:31 AM