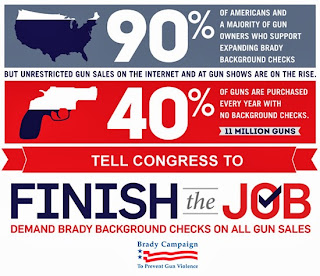 While I was away at the Brady Campaign's National Summit on gun violence prevention, a lot of gun incidents occurred. I was aware of them, of course, but didn't have time to write about them. But you can be sure that when hundreds of folks who gather together to be energized, motivated, and educated about ways to prevent the gun violence that devastates our communities every day, much discussion occurs about what is happening in the gun rights corner. Of course, there was discussion about the armed Texas thugs who tried to intimidate a group of women from Moms Demand Action when they got together for a private planning meeting at a Dallas restaurant. I wrote about that in my previous post. The national founder of the group, Shannon Watts, was at the summit and spoke about it. She made several national television appearances during the Summit to respond to what had happened.

We learned a lot and talked a lot about background checks- our focus. Background checks save lives. We know that. But we have left a hole in our system of checking people who buy guns. So people who shouldn't be able to easily get guns from private sellers at gun shows, flea markets and now, the Internet. It is way too easy to get guns without background checks and it's also easy to change. Expanding Brady background checks will finish the job of making sure all gun sales get a background check. There are other ways for felons and others to get guns, of course. I write about that all the time. Stolen guns ( they should be locked up at home). Straw purchases ( gun dealers are sometimes irresponsible). But almost all guns start as legal purchases and end up in the wrong ends far too often. We can do something about that given the will and the funding to deal with the efforts to prevent them from happening.

There was talk at the summit about the attempt by the Florida legislature banning doctors from talking to patients about gun safety in the home. The President of the American Academy of Pediatricians was there to talk about that. Dr. McInerney said it was one of the more stunning attempts to interfere with the professional practice of physicians he had ever seen. There was talk about the one year anniversary of the Sandy Hook shooting coming up next month. One of the parents of the murdered children, Daniel Barden, was there and spoke about the response to the shooting and the lack of Congressional action after his son and 19 other young children were massacred. There were tears in the room. But Mark Barden is resolved to continue his efforts along with the Sandy Hook Promise, to insist on action from Congress and change the culture and the conversation about guns and gun violence in America.

Vinny DeMarco has created Faiths United to Prevent Gun Violence. He spoke about his efforts to get religious organizations more active in the gun violence prevention movement. This will be key to letting our leaders know that people of faith are on board and expect them to act. We already know that most of these folks are with us but they aren't making enough noise. We also heard about the new campaign to talk about gun safety in homes from a mother who lost her son in a senseless "accidental" shooting at the home of a friend on a Christmas Eve some years ago. A panel of others spoke about this campaign as well. There are no "accidental" shootings. These are negligent shootings. Someone left a gun accessible to a child. Children are curious. We saw the 20/20 video showing how children will find guns and try to pull the trigger and play with them. Remember this one?


When guns are left unlocked, far too many children can access them to no good end. Suicides are the leading cause of gun deaths. In homes that have guns, suicide is more prevalent. We learned that when given a first suicide attempt is unsuccessful, 90% of those who tried don't try again. But when a gun is used, that second chance at life is much less likely.

Ricky Byrdsong's wife sat at my table. I got to know her. The shooter of her husband got his gun from a private seller with no background check. The shooter was a domestic abuser and prohibited purchaser. The private seller who sold the shooter the gun made lots of gun purchases from one gun dealer in Pekin, Illinois who was later convicted of gun trafficking. The shooter was also a White Supremacist. Lawsuits were filed about the case with the Brady Center at the lead.

A young Black woman from New Jersey was there. Her brother was shot in July. She is determined to do something so other families won't have to endure the pain she has and is feeling. It was her birthday. We celebrated with her at dinner.

There were other victims talking about their experiences. There were experts from the legal community, law enforcement, organizing, messaging, medical community and public policy experts. Todd Jones, the new and first Director of the ATF ( and from my home state of Minnesota) was there talking about his commitment to safer communities and enforcing our country's gun laws. They are not strong enough according to him and many many others. We heard from Representative Eleanor Holmes Norton who inspired us with her words about staying strong and persistent in the face of fierce opposition. She talked about her disappointment in the vote to give DC residents the right for true representation in Congress. The NRA lobbyists made sure it didn't happen. Disgusting. Representative Chris Van Hollen also spoke to us about his commitment to and his disappointment about the House failing to take up the background check bill. Sarah Brady was there to remind us that the 20th anniversary of the passage of the Brady bill is coming up on November 30th and encouraged us not to give up but to celebrate some of our wins and keep insisting that our leaders do the right thing in the name of the victims.

We heard from the Baltimore Police Chief. His strong support for expanding Brady background checks was passionate and emotional. He spoke of the increase in shooting deaths of police officers. Law enforcement is affected by the guns on the streets that are owned or carried by people who shouldn't have them.

There was much more. The Summit was powerful and energizing. Attendees went to Capitol Hill to lobby their own elected leaders and some who were not their own. We want them to "Finish the Job" that was started when the Brady law passed in 1993. I went to 2 meetings with Congress members before coming back home to Minnesota.

So what went on in gun world while I was away?

The NRA tried to excuse and defend the gun bullies in Texas who came to intimidate some innocent women who deserved to be able to go to a private meeting without guns pointed their way.

Another school shooting occurred near Pittsburgh.

A "discussion" about the second amendment in a North Carolina store resulted in a gun being "discharged" by a customer. You just can't make this stuff up.

Texas Open Carry, the NRA's own Wayne LaPierre, and others, double down on the intimidation tactics of the Texas gun rights extremists. The hole is getting deeper.

A bunch of Texas gun nuts made some very offensive and threatening remarks on Facebook pages regarding President Obama's recent visit to Dallas. What's wrong with Texas, by the way?

A South Carolina cheerleader was struck by a stray bullet while at a practice.

More instances of stupid and potentially dangerous antics by Open Carry advocates were listed in the New Trajectory blog.

And finally, Rachel Maddow highlighted the Idaho state lawmaker who has managed to keep his conceal carry license in spite of a felony. He was found to be a liar about pretty much his entire life's story but got elected anyway, according to the video from The Rachel Maddow show, below. But worse than that, Patterson lied about a rape charge and still got his license to carry a concealed weapon in public. I'm not kidding. It turns out, as Rachel Maddow explains, that a little known law gives gun rights and permits to politicians even if law enforcement takes them away- just because they are politicians. Seriously. I don't know about you, but I don't think the folks in Idaho should be feeling safer today. This is why we need stronger gun laws but the corporate gun lobby has made sure to weaken the laws to allow for such folly. Concealed carry permit holders are not all law abiding as we were led to believe they would be. Our legislators were deceived into believing the lies of the gun lobbyists in order to appease the gun bullies. Some are more concerned about being elected or re-elected than about public safety.

Great piece. Rachel raises a lot of concerns. Will Congress vote to renew the ban on plastic guns given that people can make their own guns using a 3D printer while at home? If not, the country should rise up and demand that they do. Imagine the possibilities. Now airport screeners may not pick up a plastic gun in someone's carry-on. Screening machines in the Federal buildings, where I just had to go through screening, may not pick up plastic guns. The scenarios for tragedies are endless.

I hope you liked the new video now released by the Brady Campaign. It's quite powerful. You can see it again below: