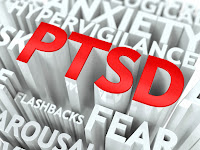 It's not often that someone says he shouldn't be able to buy guns. But this veteran actually said that about himself. In fact, he is asking for the government to take his guns from him. Really. Here is some of what he said from the linked piece above:

"And step one is to recognize that my right to own a gun is outweighed by the public’s right to have as few people as possible with mental problems walking around with hand-held death machines.

I shouldn’t have been able to walk into any of the dozens of gun shops near Fort Campbell, Kentucky (where I was stationed) and hand over a copy of my orders and $500 and within minutes, walk out with my choice of handgun, shotgun or long rifle.

I shouldn’t be able to hide my PTSD evaluation from a background check because of HIPA laws.

For the last two years I was walking past gun store after gun store with undiagnosed PTSD and nothing preventing me from taking all the steps necessary to follow in the footsteps of recent mass shooters other than my own disposition against guns and violence.

Now, keep in mind, a disposition against guns isn’t exactly the default setting in most active duty service-members and veterans with combat-related PTSD.  I served with 20 or so people in my platoon in Afghanistan, 15 of whom are out of the army now and have diagnosed PTSD.  Of those 15, I am the only one who doesn’t own a gun.

And while I’m sure there aren’t many, if any, congressman in Washington with the balls enough to go up to a combat veteran and ask them to hand over their guns  - I’ll do it for them.

Hand them over now, before something happens and you (and everyone else) regret not handing them over later."

So this man obviously thinks that policies that tighten access to guns by those who shouldn't have them are a good idea. He is in good company. A new poll shows that most Americans agree with him. After the Navy Yard shooting, a lot of attention has been paid to our system of background checks and our mental health care system. From the article:

The United Technologies/National Journal/Congressional Connection poll, which was released on Tuesday, found that 76 percent of respondents believed that enforcing universal background checks would help stop another attack like the one at Navy Yard, with 68 percent of Republicans, 82 percent of Democrats and 79 percent of independents agreeing.
Universal background checks -- meaning that private gun sales, not just those at stores, would be subject to the regulation-- have long been broadly popular. But a bill to require the checks failed to advance through the Senate in April, effectively ending efforts towards increasing federal gun legislation in the wake of December's Newtown shootings.
Another big majority, 79%, thought more mental health services would help prevent an attack, while 70% of respondents said they thought enforcing existing gun laws more tightly would help.
Americans took a hard line on buying firearms after having committed a crime -- 62% of those polled said they "would support banning gun purchases for life for all individuals with a history of violence or a police record."
The Navy Yard shooter, Aaron Alexis, passed a background check at a Virginia gun shop, even though he had been arrested on gun-related charges multiple times since 2004, and had been treated at two Department of Veterans Affairs hospitals in recent months after hearing voices.
Other restrictions asked about in the poll, like an assault weapons ban and a limit on clip sizes, were also seen as helpful by a majority of respondents. But there was a wide split between Democrats and Republicans on such measures. For instance, 67% of Democrats thought limiting gun magazine sizes would help prevent shootings, but only 37% of Republicans and 50% of independents did.

I have mentioned before in my blog that my brother was diagnosed with PTSD about 6 years ago after having many problems with anxiety and panic attacks for years after he served in Viet Nam. Though he is basically a gentle soul, being around a loaded gun when he is having a panic attack is just not a good idea. He has hunted occasionally since his diagnosis but he is now on medication to help him deal with his problems. He understands also that reasonable gun laws will not affect him and that there are times when being around guns is not a good idea for him. The biggest worry for him and for me is suicide. And, of course, gun suicides are taking the lives of way too many of our veterans. But that is an issue for another post.

So let's get to work. People are saying what they want. They want common sense gun legislation. They want people who should not be able to buy guns from getting them in the first place. Why? They don't like shootings like that at the Sandy Hook elementary school. They don't like people going about their daily work life getting mowed down by a man with mental illness who was able to buy a gun anyway. It's just not right and it's just not normal. It's happening every day in America and we should be acting but we aren't. Until Congress gets the courage to take on the corporate gun lobby once again, we will see more of these shootings. We are better than this.