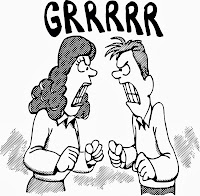 October is Domestic Abuse Awareness month. We need to remember some important things about domestic related deaths. Most (over half) are caused by bullets. I know that very personally. Before the end of this month we can expect that 46 women will be murdered by intimate partners from the figures extrapolated about deaths from domestic violence. Sometimes simple arguments or angry confrontations can turn deadly. And having a gun around in those situations is not a good idea. Guns and anger do not go together. You may remember me writing about this Kentucky man who killed his family over the way his wife had cooked the eggs. My guess is this was not the first time he had exhibited such anger. There were warning signs for this family. And without the gun, how would he have accomplished a massacre like this one?

As it turns out many of America's gun deaths are due to arguments between people who know each other. Domestic abuse is often about arguing over money, over the children, during a separation, over power and control or over insignificant things. When a gun is present in these situations, it often gets used. Women are also injured and threatened by intimate partners with guns. Bringing out a gun to threaten someone is the ultimate threat. It's hard to get away from someone with a gun. Those on the side of gun rights will argue that women would be safer if they had their own guns. The only problem with that argument is that it is specious. It doesn't turn out the way the gun rights advocates claim. But never mind. The corporate gun lobby always loves a new market for their products. So if they can get women to buy guns to protect themselves from the men in their lives, it's profit for them.

So let's take a look at the problem with domestic abuse resulting in the deaths of women. The Violence Policy Center has released a new report called, "When Men Murder Women: An Analysis of 2011 Homicide Data. The report came out just in time for public awareness about the dangers and risks of guns in domestic violence situations. It is a long report with lots of great information. Here is just a bit from the report:

The U.S. Department of Justice has found that women are far more likely to be the victims of violent crimes committed by intimate partners than men, especially when a weapon is involved. Moreover, women are much more likely to be victimized at home than in any other place.4 A woman must consider the risks of having a gun in her home, whether she is in a domestic violence situation or not. While two thirds of women who own guns acquired them “primarily for protection against crime,” the results of a California analysis show that “purchasing a handgun provides no protection against homicide among women and is associated with an increase in their risk for intimate partner homicide.”5

Finally, another study reports, women who were murdered were more likely, not less likely, to have purchased a handgun in the three years prior to their deaths, again.....invalidating the idea that a handgun has a protective effect against homicide.

Mayors Against Illegal Guns, a coalition of mayors from around the country, recently released an analysis of mass shootings since January 2009, shootings in which four or more people were killed with a gun. "There was a noteworthy connection between mass-shooting incidents and domestic or family violence," the report states. That connection? A majority of the mass shootings in the four-year period were domestic-violence related. In 32 of the 56 mass shootings, or 57 percent, the perpetrator "killed a current or former spouse or intimate partner or other family member."

If we as a society have any interest in preventing mass shootings—crimes that seem so senseless, so unpredictable—we have got to look at domestic violence.

Given the evidence and the plain facts, what should we be doing? Guns are dangerous and pose a risk to people who choose to own them. In situations where there are vulnerable people in the home, as in a domestic abuser, families should think more about whether having a gun is a good idea. Awareness about the risks can save lives. We can all do more to protect women and families from the senseless violence that is devastating our communities and our families. How about laws?  Federal law prohibits certain domestic abusers from getting guns in the first place. But is it enough? From the report in the linked article:


Although Congress has acted to protect victims of domestic violence from future gun violence, there are four key weaknesses in the law that leave women vulnerable to future attacks. Individuals who are banned from buying guns because of domestic-violence convictions or restraining orders are still able to easily buy guns through private sellers, who are not legally required to conduct a criminal background check. Many perpetrators of domestic violence are also not prohibited from gun ownership because the federal law limits this protection only to certain types of intimate-partner relationships and victims who have obtained restraining orders after a full hearing. Additionally, efforts by law enforcement to ensure that guns already in the hands of domestic-violence perpetrators are confiscated once they become legally barred from gun ownership are woefully insufficient. Finally, victims of a serious related crime, stalking, are not afforded any protection from gun violence under the law.

The report then examines the gaps in the laws that allow domestic abusers to get their guns anyway. And here is the conclusion from the article:

Domestic abusers and stalkers should not have guns. It’s as simple as that.

The individuals who perpetrate these crimes against women engage in a continuing course of escalating conduct that all too often culminates in tragedy. As the cases discussed in this report demonstrate, there are serious gaps in the federal law that allow too many dangerous abusers to easily obtain guns, and more can be done to enforce the laws we have.

As Congress continues to consider a wide range of legislative options to address gun violence, we urge our representatives to take steps to protect victims of domestic violence and stalking from gun violence and help ensure that countless other women don’t join the ranks of those whose lives were cut short by gun-wielding abusers and stalkers.

So we have a serious problem. Lives are at stake and lives have been taken senselessly. It's definitely past time to do something about this national public safety problem. But there are those who believe it's perfectly OK for domestic abusers who have "only" committed a misdemeanor rather than a felony to be able to get a gun. Check out the latest gun lobby cause ( er, ah, case) to go to the Supreme Court regarding gun rights:

Castleman’s case tells a revealing story about gun transfers in America. In 2001, Castleman pleaded guilty to misdemeanor domestic assault, for “intentionally or knowingly” causing bodily injury to the mother of his child. Seven years later, federal agents linked a gun recovered in a homicide investigation back to Castleman’s wife. They learned that Castleman and his wife had been involved in a scheme to illegally sell firearms.

Because federal law bars those with convictions for violent misdemeanors from possessing or transferring guns, and Castleman had a domestic violence conviction, Castleman’s wife purchased the guns and claimed they were for her. She then gave the guns to James Castleman, who sold the guns on the black market. Castleman was indicted by a grand jury for illegal possession of firearms but a federal district court dismissed the charges, finding that the Tennessee crime to which Castleman pled guilty did not constitute a “misdemeanor crime of violence” as defined by the federal gun law, because it does not necessarily involve the “use or attempted use of physical force” as defined by federal law.