When is the next mass shooting? 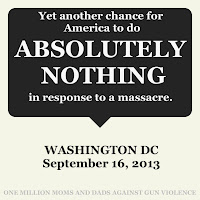 We need to ask some very serious questions after yet one more mass shooting in our country. What is wrong with us? There should be absolutely no delay for our Congress to get to work and pass the background check bills languishing in both houses.Yesterday, I was teary eyed for most of the day. First because I attended the funeral of a friend and former instructor of mine who was well loved by many. He died too young from Acute Leukemia. We weren't ready for him to leave us. The funeral was so poignant because of the special music, sung by friends of mine, and the reading of poetry written by a friend who spent many days with him as he was dying. His was a life well-lived.

On the way home, I heard the news of the most recent mass shooting in our country. I was incredibly saddened and for some reason just couldn't get over my feelings. For, from the article linked above, it was "just one more mass shooting":

“We’re confronting yet another mass shooting,” President Obama concluded Monday. “And today it happened on a military installation in our nation’s capital. It targeted our military and civilian personnel.”

Though a spate of fatal rampages by gunmen in recent years–in Colorado, Connecticut, and Virginia–set off a national call for stricter gun rules, that debate faded from headlines after the Senate in April failed to pass a bipartisan background checks bill. (...)

More than 50 mass shootings have occurred during the last four years, totaling more than one per month, according to a study compiled by Mayors Against Illegal Guns. An average of six people died at each one.

But gun violence persists in the country even beyond mass rampages on a day to day basis. More than 70 people were shot–12 of them killed–in Chicago this year during the Fourth of July weekend. And fifteen-year-old Hadiya Pendleton was shot in the same city a week after performing with her marching band at President Obama’s second inauguration earlier this year.


Are we having another "discussion" about gun safety in America? If so, where will it lead this time? Nowhere as usual? Or will we actually have had enough of the news stories about mass shooters who shouldn't have guns in the first place mowing down a whole lot of innocent victims. We have now learned that the shooter had had several incidents that should have been a red flag and made it difficult for him to get a gun. But not in America. A misdemeanor while using a gun is not a disqualifier for someone to buy a gun in this country. He was separated from the Navy. Why did have security clearance to get into the Navy Yard? The shooter, Aaron Alexis, was a "law abiding" gun permit holder in spite of the fact that he has been involved in several weapons violations. How does this happen? If this isn't enough to get the attention of the nation, I don't know what is. But you may remember that Texas recently lowered the requirements to get a permit to carry a gun. Seriously. This is not OK.We have some problems here that need to be addressed and addressed very soon before we have another mass shooting, which we will inevitably.

Meanwhile, back at the NRA, here is what one of most powerful national lobbying group is up to in order to fight against common sense gun laws.

A new report released by the Violence Policy Center entitled Blood Money II: How Gun Industry Dollars Fund the NRA (pdf) disproves the NRA’s claim that it receives no money from the gun industry. The NRA has received at least $1 million from the Freedom Group, which manufactured the Bushmaster assault weapon used in the December 2013 mass-shooting at Sandy Hook Elementary in Newtown, Connecticut.

At the annual meeting of the NRA in May 2013, the Freedom Group was inducted into the NRA’s “Golden Ring of Freedom” which is reserved for those groups that have “given gifts of cash totaling $1,000,000 or more.”

Another inductee, according to the VPC, was Smith & Wesson, which manufactured the assault weapon that was used in the July 2012 shooting in Aurora, Colorado.

And should we talk about the fact that this was yet another workplace shooting? I wrote a recent post about the increasing number of workplace shootings in America. How many more? This was not a "gun free" zone by the way. People are allowed to be armed inside of the Navy Yard. These type of shootings happen in gun free and guns allowed zones alike. Shooters don't seem to care. From the linked article:


Among the 62 mass shootings over the last 30 years that we studied, not a single case includes evidence that the killer chose to target a place because it banned guns. To the contrary, in many of the cases there was clearly another motive for the choice of location. For example, 20 were workplace shootings, most of which involved perpetrators who felt wronged by employers and colleagues. Last September, when a troubled man working at a sign manufacturer in Minneapolis was told he would be let go, he pulled out a 9mm Glock and killed six people and injured another before putting a bullet in his own head. Similar tragedies unfolded at a beer distributor in Connecticut in 2010 and at a plastics factory in Kentucky in 2008. (...)

Indeed, America is anything but gun free. We now have more than 300 million firearms in private hands. In the last four years, nearly 100 state laws have loosened restrictions on them. To varying degrees, every state except Illinois now allows guns to be carried in public.

All of which raises an obvious question: If more guns in more places is a solution to the bloodshed, then why did we just witness the worst year for mass shootings in recent history?

Thanks to my friends at One Million Moms and Dads Against Gun Violence for providing the graphic at the top.

We know that more information will be coming about the shooting and the shooter. Here is one that just came out about Aaron Alexis being cited for disorderly conduct 8 times while serving in the Navy:

The former Navy reservist identified by authorities as the gunman in the massacre at the Washington Navy Yard was cited at least eight times during his Navy career for misconduct, officials said Tuesday, including insubordination, disorderly conduct and multiple excessive absences from work.

The Navy also gave Aaron Alexis, 34, an administrative sanction after he was arrested by civilian authorities in DeKalb County, Ga., in 2008 and held for two nights in jail, a Navy official said. (...)

The official clarified that the service had originally sought to kick out Alexis with a general discharge because of his pattern of misconduct while in uniform, in addition to his arrest by Texas authorities in 2010 for shooting a gun into his neighbor’s apartment. But those proceedings were moving slowly, and it was unclear whether the Navy had sufficient cause to approve a general discharge, the official said.

As a result, when Alexis applied on his own to leave the Navy in early 2011 with an honorable discharge, the service granted his request, the official said.