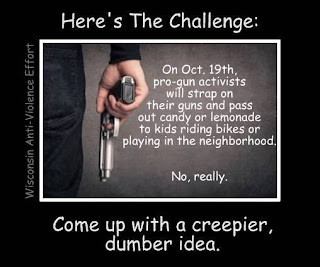 Really? Gun guys with guns in hand passing out candy and lemonade to the neighborhood kids? You just can't make this stuff up. Watch out for neighbors with guns on October 19th. From the article:

"The group Gun Rights Across America issued a nationwide call for gun owners to stand outside their homes with firearms in their hands on October 19. The event urges the armed protesters to “pass out candy or lemonade to the kids riding their bikes, and playing in the neighborhoods.” As of this Wednesday, 2,000 people have RSVPed for the event, “Guns Next Door,” on Facebook.

“We want you to strap on a holstered handgun to your hip, and give one hour of your day to making our presence as law abiding gun owners known. This is a family event too. Feel free to strap on a plastic red gun onto your children as well,” the group wrote for its Facebook event.

After other protests gained notoriety for asking people to do the exact opposite of abiding by the law, Guns Next Door is encouraging participants to abide state laws that don’t allow weapons to be openly carried. But armed events don’t often end the way organizers hope. At gun shows earlier this year, five people ended up being accidentally shot. And more recently, patrons of a Starbucks were furious when armed advocates descended on the Newtown location.

Ask gun activists why some think gun violence prevention is unnecessary, and they will explain that owners would never allow children near a loaded weapon and would never resort to violence unless it were absolutely necessary. The disclaimer at the bottom of the Guns Next Door protests may say it all: “Gun Rights Across America is not responsible for any laws that are broken as a result of this event.”"

What could possibly go wrong? Remember those accidental shootings at other "gun appreciation" days? I do. First of all, let's take the guns out of the mix. Aren't parents already warned about their children taking candy or anything else for that matter, from strangers? Would you let your kids accept candy from someone in your neighborhood that you may or may not know? Secondly, what is the purpose of this event? If the folks with guns want to own guns for sport, recreation or self defense, they can do so without flaunting them in public and in front of young children. Are these people safe gun owners? Are they making sure they are storing their guns safely away from the hands of people who shouldn't be able to access them? Are they in gun safes and stored away from ammunition? Now that these folks have flaunted their guns in public, will teens or other folks who might just want to get their hands on guns, think of stealing said guns? There are all sorts of pitfalls with this sort of a "campaign" to get kids not to fear guns and people wielding guns. Should they not fear a shooter in their school building? It seems to me the way to get children to be interested in guns, if that is the goal here, is to let their own parents expose them, or not, as they see fit. And if this is another cynical attempt by the corporate gun lobby to get children interested in guns so they will be future gun owners, it is an ill conceived idea.

And no, people are just not that comfortable with armed citizens in public. Remember the guys who showed up at a Texas Starbucks store with their guns to make this same point? It freaked people out and the police were called. Plus it just does not make any common sense. There are too many accidental gun deaths amongst children. There are too many stray bullets in our communities injuring and killing our children. There are too many gun suicides amongst teens in our country. There are too many homicides that involve children and teens. Check out the Kid Shootings blog if you don't believe me. Children and guns don't go well together unless they are supervised carefully while hunting or even shooting with their families if that is what their families choose. But having such a cavalier attitude about guns and passing out candy and lemonade to children while carrying a gun is just a terrible idea. I think even the pro gun side can come up with something better than this. I don't know where this group got their idea but it seems pretty desperate to me.

This shooting of a 2 month baby in Minneapolis is why guys with guns passing out candy to get people used to guns is a terrible idea. From the article:

A 2-month-old boy, struck by a stray bullet and critically injured Thursday night, is the latest in a string of incidents involving north Minneapolis children caught in crossfire.

Cyndi Barrington, Minneapolis police spokeswoman, said preliminary information indicates the baby was struck about 9 p.m. while being held by his father outside a home in the 2400 block of Emerson Av. N. The father told police he heard a loud bang, looked down and saw his baby had been hit, Barrington said.

Police were canvassing the neighborhood in search of witnesses, information and the shooter. “A motive is unknown,” Barrington said.

Children being shot “should not be happening,” she said. “From the police perspective, we have cops out here working 24/7 and they won’t stop. But this absolutely unacceptable and the community should be outraged.”

Thursday’s shooting comes on the heels of two separate shootings this summer that wounded two other children. Two weeks ago, a 14-month-old girl, a pregnant 19-year-old woman and a 17-year-old boy were shot when a man approached a group of people as they stood outside a parked car, fired repeatedly and then ran. And in June, a 4-year-old boy was shot along with two adults as they sat in a car.

There is new information on the shooting of the 2 month old baby in Minneapolis. It was an accidental gun discharge by a teen-aged relative of the baby:

The circumstances leading to the critical wounding of a 2-month-old boy Thursday night in north Minneapolis are not as initially believed, police said late Friday morning, and they are now calling the shooting accidental.

After reinterviewing the father of the victim, police now say that the shooting occurred inside the duplex in the 2400 block of Emerson Avenue N. and that the baby’s uncle, a juvenile in his late teens, accidentally fired the shot that wounded the baby.

The juvenile fled and has yet to be located, police added. No description of the teen is being released at this time, and officers “are out looking for him now,” police spokeswoman Cyndi Barrington said shortly before noon Friday.

“Investigators believe that this was an accidental shooting, no other suspects are being sought and the public is not a risk,” police said in a statement.

When police arrived shortly after the shooting about 9 p.m., they found a man holding his wounded son. The baby had been shot in the neck.

Guns in the home, for whatever reason, are dangerous to anyone inside of the home. This is a prime example of easy access to a gun by a teen resulting in a terrible shooting.
Posted by japete at 6:56 AM