Guns and board games 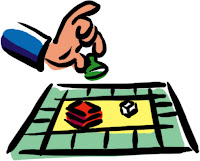 Thanks to the person who writes the Ohh Shoot blog for the many posted incidents of crazy, stupid and dangerous gun uses by mostly "law abiding" gun owners. Some of them are so ludicrous it's almost hard to write about without laughing if someone hadn't been hurt. This one took place right here in Minnesota. Three people, two of them in-laws were shot in separate incidents, one while playing Monopoly:

"Police in Chaska say that three in-laws were accidentally shot by other family members in two separate incidents, one of which happened during a game of Monopoly.

Officers say the first incident they responded to a number of days ago involved a man accidentally shooting his father-in-law in the foot with a handgun.

Police say alcohol was not involved and the entire incident was due to “negligent weapon handling.”

Then, this past weekend, officers said they responded to another shooting involving the family. This time, the father-in-law was apparently mishandling his handgun and shot himself in the hand while they were playing a board game.

The bullet, after passing through his hand, then struck his wife in the stomach, police said.

The son-in-law involved in the prior incident took them both to the 212 Medical Center, where his father- and mother-in-law were then transferred to Hennepin County Medical Center.

Again, officers say alcohol does not appear to have been involved in the second shooting.

Chaska Police said the events in tandem serve as a reminder to always respect firearms, don’t “play with them,” and keep them unloaded and locked."

Seriously folks. After the first incident, one would have thought that this family would put away their handguns and call it a day. And what the heck do you need with a gun while playing Monopoly? It must have been a high stakes game.

They are designed to injure and kill.

Too many gun owners are cavalier and reckless with their guns thinking nothing could ever happen to them. These folks were darned lucky that no one was killed or their games of family Monopoly would be over. Where is common sense? Is this what we want in our homes and our communities? Guns are more likely to be used against you or someone you know or love in your home (or in public places) than for self defense. I suggest you read the many more similar incidents on the Ohh Shoot blog and then join me in efforts to reduce and prevent senseless shootings. I am wondering at what point enough of these incidents will take place before we, as a country, decide it's time for a serious discussion about the role of guns in the American culture? Enough is enough.
Posted by japete at 4:08 PM