Conceal carry permit holders kill each other and other gun nonsense 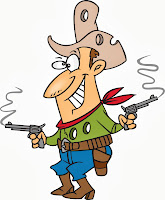 Whoever gets his/her gun out first is the winner. If someone annoys you, get out your gun. Just shoot first and ask questions later. It's that simple. Consequences? Real people die and then families and friends grieve. When a gun is present, it just might get used in a moment of rage. And when it's over, it's too late. In this case, 2 Michigan permit holders killed each other. Say it with me now- STUPID AND DANGEROUS. From the article:

"Two drivers are dead after a road rage incident escalated into a shootout. The incident happened around 6:45 p.m. Wednesday on M-66 near Steele Street.

Witnesses tell WZZM 13 one driver was following another driver too closely. The first driver pulled into the Wonder Wand Car Wash parking lot and the other driver followed him into the lot.

Witnesses say the driver of the following car fired shots, and the first driver returned fire. Both drivers were shot and killed. Authorities say both men had licenses to carry concealed weapons."

The more guns we have, the less safe we are. The more guns carried in public, the more shootings will happen. It's inevitable. We are now seeing the results of loosening our gun laws. Remember when the corporate gun lobby, who came into almost every state of the country to loosen our conceal carry laws, said that people needed to carry their guns in public for self protection? I do. It's just not working out that way. There is actual blood running in our streets, our workplaces, our schools, shopping malls, restaurants and other places where people gather. So now we have permit holders defending themselves from other permit holders. Crazy.

The incident above is a reminder to us that when a gun is available, it often gets used to settle a difference that should not end up in death. It is also a "poster child" for what's wrong with our gun culture.

The Navy Yard shooting raises lots of questions about our background check system and our system of granting permits to carry guns, as it should.

Road rage should not result in 2 gun owners shooting it out in a parking lot. We may be turning into the "Wild West" after all.

On to the next example of the American gun culture gone wrong- What should we think about this law abiding gun owner? He told his son to lie about shooting his sister in the face:

A Wisconsin dad is under fire for allegedly telling his 6-year-old son to lie about shooting his 4-year-old sister in the face.

The incident happened Aug. 30 in Alma, Wis., when the boy allegedly found a loaded shotgun and pointed it at the girl. The gun discharged, striking the girl in the right side of her head, WKBT reported.

The girl's injuries were deemed non-life-threatening, but on Monday investigators charged the father, Fred Maphis, with leaving a loaded firearm near a child and obstructing an officer by telling the son to lie about the shooting, the LaCrosse Tribune reported. (...)

The boy's mother told investigators that her son had been trained to use firearms since he was 3 and even had his own .22 caliber rifle that he was allowed to shoot with adult supervision, RawStory.com reported.

Maphis insisted that he had just forgotten to unload and secure the shotgun.

This bears repeating: "...her son had been trained to use firearms since he was 3 and even had his own .22 caliber rifle...." Three? I have grandchildren. I have a 3 year old grandson. I can't even begin to wrap my head around the idea that his parents would train him to shoot a real gun. Something is wrong in America. Three year olds should not be shooting real guns. This is an American gun culture gone wrong. Until we understand that guns don't make us safer and that little children should not be around or access real guns, we will continue to see incidents like this one. Check out Kid Shootings. Does anyone remember the 5 year old Kentucky boy who was "playing" with his child sized real gun when he shot and killed his 2 year old sister? I do.

Little kids play. That's what they like to do. Often, especially little boys, play at shooting things even if they don't have a gun. They point their fingers, they use sticks or whatever is available, as they play. I don't know where this comes from. There seems to be something inherent in our culture that influences mostly boys to think they need to aim something at a target and "shoot" it. So giving a child, who can't make the adult type decisions about what's real and what isn't, they will naturally think a gun is something to "play" with. They see their parents "playing" with guns and using them for recreation. Why not? But little kids don't have the common sense to think through that that actual gun is not a play thing and may kill an actual person.

The thing is- if little kids and even teens emulate adults, they may end up like the 2 Michigan men in the incident above. Those guys didn't have any common sense either. They had their guns and they used them when they got annoyed. Surely we are better than this. We need to think through what we are doing as a country. What is happening now is just not working. It's time for a change. Let's get to work.
Posted by japete at 7:01 AM