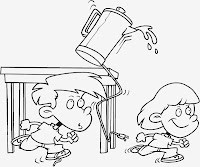 We do our very best as a country and as individuals to protect our children from accidents. We insist on fences around backyard pools. We post warning signs about various potential hazards. We have special plugs to keep little children from putting their fingers in electrical sockets. We have special locks for cupboards containing household cleaning supplies. We put childproof caps on medicine bottles. We recall dangerous toys and other consumer products deemed to be risks for injury or death or children. Children must be in child seats until they are 11 or weigh a certain weight. Playground equipment has to meet OSHA standards. We have crossing guards at our schools. We admonish our children constantly to be careful about things they are doing. So why not do the same for guns?

The question needs to be asked and answered. A new and important article has come out in the New York Times with some excellent reporting about children and accidental shootings. As my readers know I have been writing about the tragedy of children finding guns in their homes and shooting themselves, a sibling, a friend or other family member. These gun deaths and injuries are totally preventable. And yet, we do little to stop them. People seem to think their guns need to be loaded and at the ready for "self defense" in their homes. So they carelessly leave their guns sitting around ready for their children to find them and use them. From the article:

Cases like these are among the most gut-wrenching of gun deaths. Children shot accidentally — usually by other children — are collateral casualties of the accessibility of guns in America, their deaths all the more devastating for being eminently preventable.

They die in the households of police officers and drug dealers, in broken homes and close-knit families, on rural farms and in city apartments. Some adults whose guns were used had tried to store them safely; others were grossly negligent. Still others pulled the trigger themselves, accidentally fracturing their own families while cleaning a pistol or hunting.

And there are far more of these innocent victims than official records show.

A New York Times review of hundreds of child firearm deaths found that accidental shootings occurred roughly twice as often as the records indicate, because of idiosyncrasies in how such deaths are classified by the authorities. The killings of Lucas, Cassie and Alex, for instance, were not recorded as accidents. Nor were more than half of the 259 accidental firearm deaths of children under age 15 identified by The Times in eight states where records were available.

As a result, scores of accidental killings are not reflected in the official statistics that have framed the debate over how to protect children from guns.

If you look at the actual records of some of the examples provided in this article, you will see that some of the deaths were listed as homicide rather than accidental. It is beyond common sense to understand why this is the case. Is it that the families do not want to be seen as responsible for the death of their own child? Why would homicide be better than accidental? Child Access Prevention laws have been passed in some states but are rarely enforced because the parents or family members are usually so overwrought about the senseless death of their own child that extra punishment doesn't seem fair. Minnesota has a CAP law and it was recently enforced after a 4 year old found a loaded gun in his home and shot his 2 year old brother.

Since all of us want to prevent senseless deaths of our children, we should agree about measures to do so, right? That's where you would be wrong. From the linked article above:

The National Rifle Association cited the lower official numbers this year in a fact sheet opposing “safe storage” laws, saying children were more likely to be killed by falls, poisoning or environmental factors — an incorrect assertion if the actual number of accidental firearm deaths is significantly higher.

In all, fewer than 20 states have enacted laws to hold adults criminally liable if they fail to store guns safely, enabling children to access them.

Legislative and other efforts to promote the development of childproof weapons using “smart gun” technology have similarly stalled. Technical issues have been an obstacle, but so have N.R.A. arguments that the problem is relatively insignificant and the technology unneeded.

Because of maneuvering in Congress by the gun lobby and its allies, firearms have also been exempted from regulation by the Consumer Product Safety Commission since its inception. (...)

The rifle association’s lobbying arm recently posted on its Web site a claim that adult criminals who mishandle firearms — as opposed to law-abiding gun owners — are responsible for most fatal accidents involving children. But The Times’s review found that a vast majority of cases revolved around children’s access to firearms, with the shooting either self-inflicted or done by another child.

Why, given the evidence which is plain to see, would the NRA lobbyists deny that it is actually the gun owner who is responsible for the accidental shooting of a child? Common sense tells us that it is not criminals responsible for accidental shootings of children. All one has to do is read the news articles. Further, we are not fools. To even suggest that criminals are responsible for these tragedies is cynical and troublesome. The agenda of the corporate gun lobby is to promote gun ownership no matter what. If people start realizing that having a gun in the home for self defense is really a bad idea given the risks involved, fewer guns may be purchased. And we do understand the sick relationship between the NRA and the gun industry. More guns=higher profits. More guns do not=fewer deaths.

Just read the Kid Shootings and Ohh Shoot blogs if you want to know and understand the risks of guns in the home for children and adults. You won't find too many incidents of criminals being responsible for gun accidents that take innocent lives. Also check out the website of the Center to Prevent Youth Violence for information about how you can prevent senseless accidents from happening. If there are guns in the homes of the friends or family where your children play or hang-out, you have a responsibility to ask about it. Too many gun owners are not responsible with their guns no matter what some would have us believe. As the motto of CPYV goes- "Asking saves lives." For in the end that is what this is all about. We can do something positive to prevent gun tragedies. Simple common sense understanding that there are risks to owning guns is a first step. It's time to get going. We don't want small children accessing guns and dying way too soon from a tragic and preventable death.

This video, below, shows how quickly accidents can happen: