Welcome back to school kids 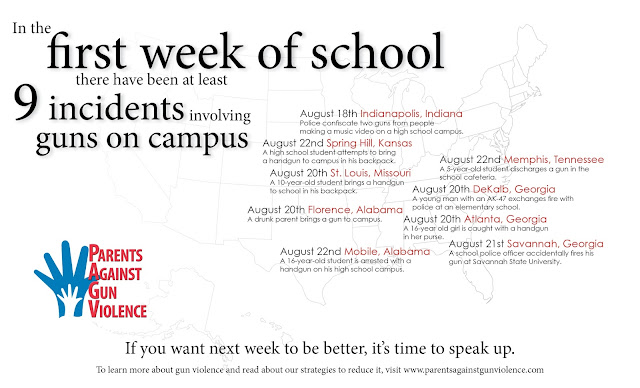 Welcome back to school kids. Is this what you can expect this school year? (Thanks to parentsagainstgunviolence.com for their "meme" which is shown above.)

Shootings in schools are actually rare. More children die from gunshot injuries outside of school- in their own homes or on the streets. You can read about gun and shooting incidents at Kid Shootings if you want to find out how often kids are involved in gun incidents. The Children's Defense Fund, as always, writes a report every year about children and gun violence. It's a sad testimony to our American gun culture that a report even needs to be written.

But in recent years, high profile shootings of children and college students have been on the increase.

So, of course, people have a reason to believe that their kids may not be safe in our schools. One group, formed after the Sandy Hook shooting on 12/14, has just released a powerful and "in your face" PSA to get the point across. Here is the video from Moms Demand Action for Gun Sense, released in the week before our kids head off to school. You can watch it here:

As the writer of the Huffington Post article about the video says:

And finally, there will be the group that will see the ad as promoting hysteria. As with so many threats, they will say, today’s generation of parents has blown this one out of proportion, and has lost track of the fact that school shootings are extraordinarily rare. Our children are actually in less danger, not more, in today’s world -- not only from school shootings, but from mishaps and violence in general. To put our schools on lockdown, they argue, is not commensurate with the risk, and is doing its own kind of damage by leading us to over protect our kids. They, too, will see this ad as a scare tactic.

And me? I think that the ad gets it exactly right -- precisely because it creates such strong, and opposite, responses. In this debate neither side has fact completely on its side, and both have thoroughly understandable, legitimate, compelling emotion. On the one hand, our kids may not statistically be in the cross-hairs, but it sure feels like they are every time we send them off to school. On the other, adding more guns to the mix is more likely to insure violence, not reduce it, but it sure feels like it will help. We need to recognize that feeling of parents of being under siege, then begin to defuse it.

I say that it's about time gun violence prevention advocates are more "in your face." For too long, we have sat mostly quietly by and watched as the gun rights advocates pushed their agenda of fear and paranoia to encourage more people to own and carry loaded guns in more public places. There is a push for teachers to carry guns. Some folks on the side of gun rights think they ought to be able to carry their own guns into their children's schools. I mean, what could possibly go wrong? Lots, of course. Anyone remember this one, or this one, or this one? Or what about a 5 year old bringing a gun to school in his backpack and firing it at a Tennessee school? Or check out how often "law abiding gun owners and carriers have accidents with their guns at the Ohh Shoot blog. But never mind common sense.

As the article above noted, it is ridiculous that our children need to practice lock down drills in case of a school shooter. Schools have also spent millions making security measures for school entrances and even security cameras. Why are we not trying to do more to keep shooters out of our schools and to keep people who shouldn't have guns from getting them anyway? The question needs to be asked and answered. Lives depend on it. The answer is not arming teachers. I've been an educator in both elementary and upper grade schools. I have had experience with lock down drills. I know that my first job is to get the students to a safe place away from doors and windows and to stay with them. My job is not to stand down a shooter. What good would that do? I would be a sitting duck and get shot myself, leaving the kids vulnerable to the shooter. Where would teachers even keep guns? The gun rights folks must think that carrying a gun around during the busy school day is just fine. They aren't thinking about  what teachers actually do during the course of a day. They might bend down to listen to what a child is saying. They might even get down on the floor. They might do jumping jacks during gym class. They might run around with kids on the playground. They might walk around the room telling a story or giving a lesson not being in the same place for the whole day. They might go into another classroom to give a lesson and maybe that other teacher is not armed and ready to shoot. They might be standing at the white board with their backs to their students. They might be monitoring kids at the bus or in the lunchroom. Should I continue?

And to think that teachers should be now responsible for shooting at shooters and taking gun permit courses in addition to all the other requirements of teachers is insane. Some of the "gun guys" have no idea what they are talking about when they push their agenda. But if we follow the money, arming teachers just might lead to more gun sales and higher profit for gun permit classes. But I digress. To think carrying a loaded gun around is conducive to the daily activities of a teacher is ludicrous and downright crazy. If the gun is not on my person, will it be in my purse? Where is my purse? In the closet where curious hands can find it? In my desk drawer where curious hands can find it? Where I can't find it in case of a shooter? Nonsense, all of it.

So tonight is Open House or Back to School Night for many Minnesota schools. My own grandchildren will be going with their parents. Let's hope that some parent doesn't show up with a loaded gun. Let's hope for a peaceful and violence-free school year. And let's hope we can get to work to make the changes that we need to our gun laws to keep our children safe from the gun violence that has and does devastate families all over America. If the start of the year is any indication, we may be in for a difficult year. We are better than this.

There's been another school shooting in Winston-Salem, North Carolina:

A shooting at Carver High School on Friday left one student with non-life-threatening injuries and another student in custody. The authorities put the school on lockdown after the incident.

According to eyewitness accounts and police, the shooting happened outside of the school building at the end of a scheduled fire drill. Officer Tim Wilson, a school resource officer assigned to the high school, called in the report of the shooting, Winston-Salem Police Chief Barry Rountree said at a news conference after the shooting.

The police chief didn’t identify the shooter. No charges have been filed yet. A witness said four or five shots were fired.

Rountree praised Wilson for his quick action in arresting the suspect and protecting other students.

“I am grateful that this was taken care of very quickly, and we didn’t have any further injuries,” said Superintendent Beverly Emory of the Winston-Salem/Forsyth County Schools.

“I don’t have any information on how it started,” Rountree said of the shooting. “It was outside on school property. I’m not sure where it was.”

Rountree declined to reveal the ages or the school year of the suspected shooter or the victim. He also declined to discuss in detail the victim’s wounds, citing an ongoing police investigation.

District Attorney Jim O’Neill called the shooting “everybody’s worst nightmare,” and said he understands that the public wants information about the incident.

Please note that the school resource officer did not stop the shooting but was there to arrest the shooter.