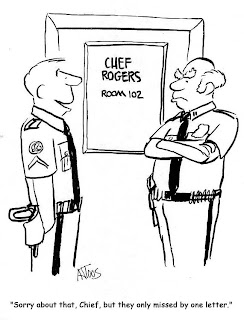 Just in case you were wondering, things got interesting yesterday for "Officer" Kessler, the only police officer and police chief of the town of Gilberton, PA. I wrote about his offensive behavior in a previous post about gun extremists. Kessler was placed on a 30 day unpaid leave for his antics which have gone viral on social media. From the article:

The most recent video was made last week during his vacation in Texas while news of his previous video went viral. In the most recent video, Kessler shoots a paper target of a gunman whom he describes as a "gangbanger," "New York City thug" and likely Obama voter.

After firing several shots, the target is riddled with bullet holes about the head.

A notation on the video, which he tweeted after the Wednesday's council meeting, suggests he rented the gun.

Borough council didn't fire him for the content of his videos but for using borough weapons. The discipline was approved 5-1 following a short meeting Wednesday night where supporters and critics of Kessler gathered outside.

As council members first met with Kessler in private, the crowd fought for spots close to the door and argued over whether he should have made the video, in which he shoots restricted weapons off an old strip-mine road in the borough. Some in the crowd talked about "libtards" — a word Kessler uses — and others demanded his dismissal.

After the executive session, Kessler emerged to tell anyone within earshot of his fate and accused council of "bowing to political pressure." He said he objected to the suspension and wouldn't have done anything differently.

"There's no policies in place here in Gilberton to govern that," he said, referring to his behavior in the videos, and then advised those who took offense: "Don't hit the play button. … These people are complaining to complain."

He said he hasn't decided yet whether to post another video."

The article includes more information about the meeting and also about Kessler's interesting supporters:


He said the issue is not whether Kessler has a right to have a gun or curse on a video. He said it's how he used his words to intimidate people, which is not protected speech.

"Kessler's video was produced to threaten and intimidate," Morrill said. "People who are registered Democrats cannot expect to be treated fairly because Kessler doesn't even want to call them people because that's being too kind. He calls liberals 'libtards' and says the Founding Fathers would be shooting them if they were alive today."

The public spectacle began more than an hour before the council meeting when people began lining up for a seat in the Borough Council room tucked in a treatment plant in the town of fewer than 800 residents.

Some of Kessler's armed supporters stood near him and the door to Borough Hall, blocking the media. Some held signs, with one reading "Impeach Obama. Kessler for President."

When Kessler arrived with his attorney, someone from the crowd yelled: "All right, Mark! We're with you!"

Some of Kessler's supporters wouldn't give their names. "You've got to be kidding," one woman said to a reporter, turning her back. "That's my comment."

Morrill and Gene Stilp, an activist from Dauphin County, held an impromptu news conference before the public meeting. Stilp handed out several right-to-know requests he submitted to the borough about Kessler.

Stilp, a gun owner, said he supports gun rights but said Kessler set a bad example to youth about who a responsible gun owner is. He called Kessler's continued employment a "serious liability issue."

Some in the crowd heckled Stilp and Morrill, one calling them "libtards."

Lifelong resident Rose McCarthy said of Kessler, "For him to represent our borough like that is disappointing. He lost all credibility. How could you carry on like that?

"You know why there's not more residents here? The threats. That's why. Because they're afraid. They're afraid they're going to have their windows shot out," she said. "It's sad. It's disheartening."

After the executive session, Hannon announced the public meeting would begin and, because of limited space, offered seats to borough residents and the local newspaper first.

Media members rushed to the door and got inside for the 20-minute meeting, where council voted 5-1 without discussion to suspend Kessler, who earns $15.25 an hour and is the police department's only member. In the meantime, state police will cover the borough.

Councilman Lloyd George said afterward that he voted against the suspension because Kessler "is a good man and comes from a good family." He said what Kessler did is protected.

Despite the large turnout, just a handful of people spoke at the public meeting. One man told council that his wife is scared to come to Gilberton because Kessler is chief.

"If I'm going through the borough, I'm not going to stop until I get to Frackville," said Gregory Rove, who didn't tell council where he lives.

Peter Kostingo of Frackville told Kessler he should be fired, not suspended.

Residents had been angrily calling Borough Hall as media all over the country, as well as at least one website in the United Kingdom, carried the story of Kessler's videos.

Kessler maintains he did nothing wrong by shooting a video on his own time. He initially gave media interviews, saying he used profanity to get attention to his cause. And Hannon immediately stood by Kessler, saying the borough had no right to intervene in a lawful video Kessler shot on his off-time.

She argued the First Amendment protected his use of profanity and the Second Amendment allows him to shoot the selective-fire weapons, which he had on automatic mode in at least one video.

In one video, Kessler profanely complains about the United Nations and Secretary of State John Kerry. In another, he wears his badge and begins what appears to be a tutorial on how to shoot a gun, using a picture of a clown he calls House Minority Leader Nancy Pelosi, D-Calif., as the target.

The video that created the media firestorm was an "apology" for the Kerry video. The video was taken on an old strip mine road, away from homes, where he said he goes for target practice.

Kessler said he has been getting death threats since the media began reporting about the video.

Several groups have since distanced themselves from Kessler, who is also a North Schuylkill School Board member. The board issued a statement saying the other members didn't "condone the video."

The Pennsylvania Police Chiefs Association issued a statement pointing out that Kessler is not a member and most in law enforcement support the Second Amendment, but Kessler's video does not reflect the values of most law enforcement leaders.


There's more here for your amusement.

Kessler is threatening and offensive, He is not a member of the Police Chiefs Association or likely not even an accredited police officer. He has had prior problems with the law. He is bombastic and inappropriate at the least. He represents a subset of Americans who hate their government and stock pile their guns to use against duly elected members of Congress and even the President of the United States. Kessler is not a nice person. Maybe he came from a good family but something went seriously wrong in their raising of this narcissistic extremist.

Common sense should tell the Mayor and the Gilberton Council that Kessler needs to go. I don't see how there is any question about it, actually. And his membership on the town School Board is now totally ludicrous and should be of concern to those who care about kids. The best thing about this case is that Kessler is such a narcissist that he loves to see himself on video making incendiary and threatening remarks. For that, he got the attention he wanted but it's not going to turn out well for him.

Josh Horwitz of the Coalition to Stop Gun Violence has written this piece about the militia members who showed up to support "Officer" Kessler at the town council meeting that suspended him. From his article:

In 2009, I co-authored a book called Guns, Democracy and the Insurrectionist Idea. In the book, Casey Anderson and I exposed the threat of insurrectionists -- those who believe that they have an individual right under the Second Amendment to shoot and kill elected officials, police officers and military service members in response to what they see as "tyranny." We warned the nation that insurrectionism was anathema to our democratic society and, if allowed to spread, could lead to serious violence.

Some thought our warnings were overblown or alarmist. Even as Congressional offices were vandalized and Gabby Giffords was shot during an assassination attempt, the conventional wisdom held that we were too advanced as a country to succumb to political violence. But now -- out of the same state where rebellious farmers launched the Whisky Rebellion in 1791 -- we have seen the true face of "Second Amendment remedies." A one-man police force and his private militia -- accountable not to the local government, but to him -- appear to have taken over the small town of Gilberton.

Too many of our leaders have indulged insurrectionists as if they were bullying in-laws -- unpleasant but not really dangerous. Mark Kessler has shown us a grimmer reality: How democracy is compromised when access to the political process is blocked through brute intimidation and dissenters become an endangered species. Thanks to the gun lobby and its minions, armed political violence is no longer just something we see in the news in some far away third world country, but a contagion that is beginning to inflict our culture right here in the United States.

In response to the Whiskey Rebellion, the retired General who led our nation to victory in the Revolutionary War literally put his uniform back on, got in his saddle, and physically confronted the "insurgents" threatening our young nation. What is true then is still true today. Our democracy will not survive if we allow "the guys with the guns to make the rules."

Horwitz asks that people sign a petition to ask the council to permanently suspend Kessler from his duties. Mark Kessler, as I have written, is not your average police officer. He is not even your average gun owner, most of whom support common sense gun laws. He represents a potentially dangerous group of Americans who have stock piled their weapons for a specific reason. Check out the "security" folks who showed up at the meeting if you want to see some polite gun owners ( "an armed society is a polite society"). At the beginning of the article Horwitz talks about Kessler's private militia group:

This is no idle threat the chief is making. Kessler is the head of a private militia called the Constitution Security Force (CSF) whose members swear an oath to "respond to the call if... needed to resist tyranny that seeks to destroy our republic." Kessler recruits CSF members at his website ChiefKessler.com, combining his personal and professional identities in one neat little package.

CSF openly affiliates with anti-government extremist groups like Oath Keepers and the "Three Percent" movement, which was founded by former Alabama militia leader Mike Vanderboegh. Vanderboegh made his own headlines in 2010 when he urged supporters to throw bricks through the windows of Democratic offices nationwide following Congress' passage of health care reform. Many offices were vandalized in response, including that of then-Congresswoman Gabby Giffords.

You just can't make this stuff up. Except this is real.