Jesus and the second amendment 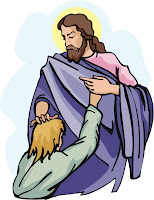 Seriously folks. I had planned to write about several other things today until I ran across this most ridiculous article:

"In a chilling assault on reasonable sensibilities from yet another in a growing line of gun-crazed RWNJ‘s, Christian chaplain Gordon Klingenschmitt urged the followers of his “Pray In Jesus Name” program to “sell your clothes and buy a gun.”

Using Jesus to unequivocally declare to his (presumably weak-minded) followers that they are “being denied their Second Amendment rights,”"Dr. Chaps,” as he calls himself, quoted United States Army Captain Terry M. Hestilow (Ret.), who is on record as stating the Department of Homeland Security intends to kill:

“…Anyone they think is standing in their way to impose a new Marxist government… anyone who stands for the U.S. Constitution.”

Comparing this impending doom to the imminent crucifixion of Jesus, Klingenschmitt quotes Luke 22:36 NIV, which states:

“Jesus said ‘if you don’t have a sword, sell your cloak and buy one.’”

Quick question – what ever happened to that old “live by the sword, die by the sword” thing? To wit – Matthew 26:52:

“Then said Jesus unto him, Put up again thy sword into his place: for all they that take the sword shall perish with the sword.”

In the most chilling segment of the video, “Dr. Chaps” leaves nothing to interpretation:

“You know what, citizens? If you don’t have a gun - I’m telling you as a Christian chaplain - sell your clothes, and buy a gun. It’s time! The government persecution will be coming against you, and you needs to arm yourselves…”"

It turns out that "Dr. Chaps" aka Gordon James Klingenschmitt, was court martialed by the Navy but is still posing as a Navy Chaplain:

" Gordon James Klingenschmitt was a Navy Chaplain who was court-martialed for refusing to follow orders, lying, and generally not acting like a navy officer should. Now he is getting into trouble with a website that gives the illusion that he is still a Navy chaplain. No surprise here, he is now calling for God to kill people he disagrees with."

Wow. He is espousing other right wing conservative views as well. So let me get this straight. A former disgraced "Christian" chaplain is telling people to go out and buy guns in the name of Jesus? What has our country come to? Amazing really. But just so you don't think I am making this up, below is the video of this guy from the article:

Now I am a practicing Christian. This is not what I hear in my church. But this is what the craziest amongst us are preaching. Where is common sense?

So the "right wing gun nuts" think Jesus is on their side apparently. They are making things up as they go along in their stupid and dangerous world. The NRA lobbyists have made sure to target those Christian conservatives to get them to buy guns. If anyone believes this crazy fake "Christian" chaplain, they will run right out to their local gun store to buy themselves a gun or two. It might mean they won't be able to afford school clothes for their kids. But hey, what's more important anyway? Clothes or guns? And who makes the profit on the sale of a gun? Just follow the money.

I am no religious scholar but to even posit that Jesus would have supported the second amendment is so ludicrous as to beg credulity. This fake chaplain claims to be Christian and know something about the Bible but he must be a front for the conservative Christian right wing and maybe even the corporate gun lobby. Does anyone actually believe this stuff?  Hard to know.They would be believing someone who lies and refuses to follow orders if they do. The facts and common sense mean nothing to these crazed gun rights extremists. I mean, Jesus must be about the only one left off of the NRA enemies list. Can you imagine any serious organization publishing a list of enemies? Is that what Jesus also believed? If Jesus wants everyone to have guns for self protection and to fight against the "enemy", here is just the list for him.

The NRA has done this for years. Back in the early 2000s they had a "blacklist". I even went to the Million Mom March sponsored Blacklist Ball in Washington D.C.. We were proud to be on the list. I hope the people who find themselves on this insidious enemies list are also proud. Being an enemy of the NRA means you are in favor of saving lives and doing all that can be done to prevent shootings. If that's bad, I would like to know why. The only problem is that this list must put a target on the backs of those who are on it and there are just enough crazy people with guns out there to potentially act out what "Dr. Chaps" is telling them. Get your guns and go after your enemies and your government. Jesus said you should do it. Just trust "Dr. Chaps".

As I have said many times, you just can't make this stuff up. We are better than this. It's definitely time to change a gun culture that promotes a fake "Christian" chaplain encouraging people to buy guns and to use them in acts of violence. Shame on him. Jesus was a non-violent and peaceful figure who preached those values to his followers. To twist biblical teachings to make them support your fear and paranoia is cynical at best and dangerous at most. Bad things have happened historically in the name of religion. This is just plain nuts!!!
Posted by japete at 2:28 PM