Guns for self defense, again? 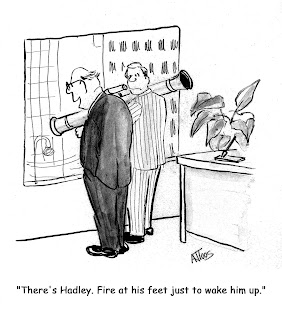 Yesterday I had an exchange with one of my commenters about why he chooses to carry a loaded gun around with him everywhere he goes. You can see it here. This man is quite certain that his gun will only be used when he needs it to shoot a burglar or someone who he thinks is going to do him harm. This happens rarely as I often mention on this blog. In fact, what happens more often is that the very gun purchased to use for self defense or maybe hunting or recreational shooting, ends up getting used against you or someone you love or know. Guns are dangerous. They are designed to kill. Some gun owners are careless and cavalier with their guns. They think nothing could possibly happen to them. Until it does.

So today, here is an incident I ran across on the Ohh Shoot blog. This blog is keeping track of stupid, dangerous and sometimes tragic incidents that happen with guns, mostly legally owned guns and sometimes those carried by legal gun permit holders. I don't know what evidence is needed by my readers to understand that the facts show more guns in the hands of more people carried into more public places equals more gun deaths and injuries. But I digress. Let's look at this awful story from the article above:

Police said Connellsville man was arrested Sunday after he accidentally shot and killed his cousin with her own gun after she told him it wasn't loaded.

Jeremy Hamborsky, 24, was free Monday on $50,000 bond. State police in Uniontown said he faces a charge of involuntary manslaughter.

The suspect's family said Kylie Marie Sage, 23, and her friend were sitting in a pickup truck with Hamborsky and his girlfriend when the shooting happened shortly before 2:30 a.m. in Bullskin Township.

Police said the vehicle was parked on North Bell View Road, and Sage was showing Hamborsky a gun she bought earlier in the day.

Police said Hamborsky told them that he was sitting in the passenger seat when Sage handed the weapon to him. He asked her if it was loaded and, after she said it wasn't, he moved the pistol's slide and the gun fired a shot, police said.

Family for both Sage and Hamborsky confirm the two were cousins and were very close.

"It's one of those things where we all have to stick together, help each other through this," said family friend Dan Martucci.

"It's very difficult just knowing what happened, knowing both families. It's very sad to know both families are going to go through a lot of hard times right now," said Clarissa Peterson, who knew Sage and Hamborsky. "I know they were very close, so it's sad."

Martucci said the woman believed in self-protection and was permitted to carry a gun.

The woman bought the gun for self defense and was a gun permit holder. And now she is dead. Now she won't be doing things with her cousins any more.

I would suggest that we start by dealing with the facts and not with Wayne LaPierre's famous rants such as "the only thing that stops a bad guy with a gun is a good guy with a gun". He is wrong, of course. LaPierre and the corporate gun lobby have it wrong about a whole lot of things concerning guns and gun deaths. But I digress. From this article, we learn some actual numbers, not made up numbers:

A new paper from the Violence Policy Center states that “for the five-year period 2007 through 2011, the total number of self-protective behaviors involving a firearm by victims of attempted or completed violent crimes or property crimes totaled only 338,700.” That comes to an annual average of 67,740 — not nothing, but nowhere near the N.R.A.’s 2 million or 2.5 million.

Readers can judge for themselves whether the V.P.C. or the N.R.A. is likely to have better numbers. The V.P.C. used data from the National Crime Victimization Survey, conducted by the Bureau of Justice Statistics. The N.R.A.’s estimate is the result of a telephone survey conducted by a Florida State University criminologist.

The V.P.C. also found that in 2010 “there were only 230 justifiable homicides involving a private citizen using a firearm” reported to the F.B.I.’s Uniform Crime Reporting Program. Compare that with the number of criminal gun homicides in the same year: 8,275. (That’s not counting gun suicides or unintentional shootings.) Or compare it with the number of Americans killed by guns since Newtown:  3,458.

As the V.P.C. paper states, “guns are rarely used to kill criminals or stop crimes.”


Just for "fun" I think we should watch the NRA's Wayne LaPierre rant again:

Mr. LaPierre, what do you say to the friends and family of Kylie Sage? She is dead because she bought a gun for self protection and a permit to carry and thought her gun was unloaded. Was she a good "guy" with a gun? Was the person who shot her a good guy with a gun? Do people who buy guns know enough about them to understand how they work? Do permit holders actually know what they are doing when they carry loaded guns around in public places? Have we made absolutely certain that everyone who carries a gun is going to be careful with that gun? Have we made sure that there is a really good reason for people to carry guns in public places? The answer is clearly "NO". Instead we are making sure that people who shouldn't have guns get them anyway. We have made sure to loosen conceal and carry laws so more people are carrying in public when they don't need to. Why? The corporate gun lobby. Follow the money. If more people are scared by the fear and paranoia coming from Wayne LaPierre, they will go out and buy guns. Profits speak louder than reality.

So then, we know that guns kill people. We know it's rare for a gun to be used in self defense. We know that actual people are being shot every day by guns bought legally to be used in self defense. These shooting incidents include homicides, suicides and accidental shootings. We can see the evidence. Then where is common sense? Why do our leaders continue to let the corporate gun lobby get away with their deception? Too many people are dying every day. This is a national public health and safety epidemic. Just read the regular blog by Joe Nocera of the New York Times. There are 20 shooting incidents listed in his current post. One could be a self defense shooting but that is yet to be known. Several are domestic, one accidental, quite a few drive-bys, some gang related. This should not be happening in our communities. It doesn't happen in other countries except for those at war or in political battles such as that going on now in Egypt.

Three things need to happen in order to reduce and prevent gun deaths and injuries. Laws such as universal background checks, need to be passed to make sure people who shouldn't be able to own or carry guns don't get to do so. We need to look at the laws "already on the books" (conceal and carry and Stand Your Ground) to re-examine their efficacy and safety and reconsider some of their provisions. And third, we need to re-think the whole American gun culture and decide if what it has become is what we want or need in order to keep our communities free from the gun violence that is so devastating. It's time for a change. What we are doing now is plainly not working. Surely we are better than this.

Thanks to Laci for sending me this article about a Utah gun owner and "self defense":

Unified police Detective Jared Richardson said the homeowner heard someone about 1:30 p.m. upstairs in his home near 4300 West and 5940 South, grabbed a semi-automatic handgun and headed up to investigate.

The two then had an argument, which escalated into a physical confrontation. Ultimately, the homeowner ended up on the ground with the suspect on top of him, Richardson said.

At that point, Richardson said the homeowner fired his gun, but missed the suspect. The suspect then grabbed the gun and fled.

Police said they’re looking for a Latino in his early 20s, about 5 feet10 inches tall with a slender build. He was wearing khaki pants, a black button up shirt and had a short buzz cut and possibly a mustache.

So much for a gun for self defense in the home and/or to use to stop a robbery. How could this have turned out differently? A home security system? Making sure all doors were locked? Calling the police and going outside instead of encountering the burglar? As we can see, the gun idea didn't turn out well and the home owner was actually lucky he was not injured or killed by his own gun.
Posted by japete at 8:39 AM