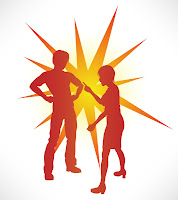 Luckily for us, there are Senators who know how to do what's right for women and domestic violence. The two brave Senators from Connecticut are teaming up to propose that domestic abusers not be allowed to have guns. From the article:

"A loophole in federal law permits domestic abusers to purchase a firearm even after they are subject to a temporary restraining order due to their abuse. Next month, however, Sens. Dick Blumenthal (D-CT) and Chris Murphy (D-CT) plan to introduce legislation to close this loophole and ensure that abusers cannot obtain firearms during the especially volatile period immediately after their victim seeks legal action.

According to the New Haven Independent, under current law abusers subject to permanent restraining orders are not permitted to buy firearms, but in most states abusers subject to temporary orders are still able to buy guns. Moreover, in many jurisdictions temporary restraining orders are issued shortly after a woman applies for a permanent order, while the permanent order itself may not issue until a hearing occurs a week or two later. Thus, under current law, a many victims face a week or longer where their abuser will both be enraged that their victim took legal action against them and fully capable of purchasing a deadly weapon.

Unless Senate Democrats invoke the so-called “nuclear opinion,” their Republican counterparts will have the power to filibuster this bill. And even if the bill clears the Senate it still must survive Speaker John Boehner’s (R-OH) House.

If Congressional Republicans oppose the law, however, it will put them at odds with the very rhetoric they used to justify their opposition to gun regulation earlier this year. During a key Senate hearing on a proposed gun safety law, Republicans selected a witness who claimed that assault rifles should be legal because women can use them to defend against attackers. In reality, of course, there is little evidence suggesting that loose gun laws protect women. To the contrary, two-thirds of people killed by domestic abusers were killed by a firearm and “abused women are five times more likely to be killed by their abuser if the abuser owns a firearm.”

Nevertheless, Blumenthal and Murphy’s bill will give Republicans a chance to demonstrate that their concern for women is genuine, and not just a rhetorical ploy. To do so, however, they will have to allow the bill to become law."

I just wrote about the anniversary of my sister's shooting 21 years ago. She did not have a restraining order but did have concerns over the behavior of her estranged husband. Women ( and sometimes men) who have restraining orders get them for good reasons. The laws are different in every state which is why Senators Blumenthal and Chris Murphy want a federal law to make it uniform. Too many women are killed by guns used by their abusers or an intimate partner. Domestic shootings do sometimes leave men as their victims but the majority are men killing women. The most dangerous time for a woman is when she is leaving a relationship or just after she has left the relationship. Adding a gun to the mix is a bad idea. I applaud the Connecticut Senators for proposing this common sense bill. As always, prevention is better than picking up the pieces of a fatal shooting after it has happened. The Senators from Connecticut understand picking up the pieces after what happened on 12/14 in their state. Many of our country's mass shootings have actually been domestic shootings that took the lives of more than just the person targeted by the shooter:

A new analysis of 56 mass shootings across America since 2009 finds women and family members are the most frequent victims, and that the shooter almost always acquired his guns legally, in cases where the gun source is known.

“In at least 32 of the cases (57 percent), the shooter killed a current or former spouse or intimate partner or other family member, and at least eight of those shooters had a prior domestic violence charge,” the Mayors Against Illegal Guns report on mass shootings said, suggesting that the problem of gun violence is far more related to violence against women in homes than rampages in public settings such as schools and theaters.

The study also found that in the cases where the source of the guns was known, almost all were acquired legally: only two examples were given of mass killings with a stolen or illegal gun. That finding runs counter to the gun lobby’s oft-cited rhetoric that only criminals abuse guns.

“We had sufficient evidence to judge whether the shooter was a prohibited gun possessor in 42 of the 56 incidents,” the report said, referring to laws barring ex-felons, mentally ill people, drug addicts and other categories of people from owning guns. “Of those 42 incidents, 15 (36 percent) involved a prohibited possessor and 27 (64 percent) did not.”

Let's look at specific examples from the Mayors Against Illegal Guns report on mass shootings in the linked article, above:


You can read the awful details if you want. I have only highlighted those that included spouses or domestic partners. In one case, a man shot his children and not his wife after arguing with her. There are others involving family members which I did not include and the linked report only goes back to 2009. This, dear readers, is why we need to do something about domestic abusers. Some of these shooters did not have restraining orders or indications that they might just take their legally owned guns and shoot up their partners and other family members and/or innocent neighbors or community members. That kind of carnage may or may not be stopped by a law. We do know that these folks, even if prohibited by the law proposed or current background check laws, can buy guns easily with no background checks on the Internet or in private sales of guns. And, of course, this list did not include the every day domestic shootings like my sister's that make the daily newspapers in cities all over America.

But certainly there needs to be more awareness that guns in any situation where someone is having domestic problems or anger issues are a bad idea. Family members need to be more alert when one of their own is experiencing problems. Guns are dangerous and are and may be used in situations like the ones highlighted. In over half of domestic murders, a firearm was the weapon of choice. Both laws and education/ awareness are necessary. Our American gun culture is such that when someone with a gun has a beef with someone, loses a job, has marriage or relationship problems, gets angry at a partner or wife, guns are seen as an "equalizer".  I know this from first hand experience and I know others who have had the same tragic experience.

So will Congress do the right thing? Sadly, likely not. Given that some Senators and most House members care more for their re-election chances and the push back from the uber powerful corporate gun lobby, the likelihood of trying to protect women from being shot to death is slim. As a country we are better than this. We have a lot of work to do to fight against the corporate gun lobby whose agenda is to sell guns rather than think about protecting lives. For those guns are rarely used in self defense as is proclaimed. They are many times more likely to be used against someone in the home than against an intruder or for self protection. Those are the facts.

It has been less than 24 hours since I posted this and already there has been another mass domestic shooting in Texas:

Four people were killed and four others were wounded Wednesday night in two separate but related shootings, one of which involved an explosive device, not far apart in Dallas and a nearby suburb, police said.

The suspect has been identified as Erbie Bowser, who identifies himself on his Facebook page as a former Dallas Mavericks dancer, CBS Dallas station KTVT-TV reports. Bowser was arrested at the second crime scene in DeSoto, Texas, outside Dallas. Charges against the suspect are still pending. Family members said that Bowser was looking for his ex-girlfriend at both of the houses.

The gunman then moved about 7 miles to another home in DeSoto, Mitchell said. There, at around 10:45 p.m., he tossed some type of explosive device into the home, police told KTVT-TV, before opening fire again.

Nothing more needs to be said. Where is common sense?
Posted by japete at 2:41 PM