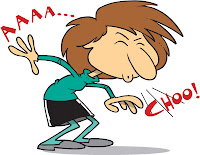 You just can't make this stuff up. Guns are dangerous. People who own them and carry them often take for granted that they, themselves, will be careful and nothing could possibly happen to them. Until, of course, it does. Take this one, for just one example. From the article:

"Police in Connecticut say an 81-year-old man who was lying in wait with a rifle for a pesky raccoon accidentally shot himself after sneezing and falling from a chair.

Pace told authorities that a raccoon had been scratching at his back door for several days and he was waiting for it with a .22-caliber rifle. Police say he sneezed and fell from his chair, then realized he had accidentally shot himself.

Police detectives seized the rifle and are investigating the incident."

Seriously. What next? It's too bad that this guy shot himself. It's also fortunate that no one else was near this guy with his gun. First of all, can we talk about the wisdom of elderly folks with guns? I know the gun guys think everyone should have a gun if they want one. But at some point, families have to make a decision about whether their elderly parents should continue driving. It's all about public safety. Both my mother and mother-in-law stopped driving as they understood that it was not safe for themselves or others if they continued. They couldn't have passed a driver's test anyway. Why should we not make sure that after the age of, say, 80, people take a test to make sure they can see their target and know how to operate a deadly weapon. Lives depend on our getting this right. I have written about incidents on this blog where elderly folks have shot someone by mistake or intentionally. One of the most recent is the Minnesota grandfather who accidentally shot his granddaughter when he thought she was an intruder.

In other news of shootings by "law abiding" gun owners, this story is what our gun culture is all about:

The off-duty correction officer who allegedly shot his teenage son after they fought over the boy’s shoplifting arrest is using the Oscar Pistorius defense.

Robert Smalls, 39, claimed in court Monday he mistook his son for an intruder in their Queens home when he fired a shot into the 17-year-old’s stomach early Sunday morning.

Now the boy is relieved just to be alive.

“I’m thankful,” Quasaun said from his bed at Elmhurst Hospital, before disappearing from the facility Tuesday morning.

The elder Smalls was arraigned on charges of felony assault and criminal possession of a weapon in Queens Criminal Court after shooting Quasaun about 4:30 a.m. Sunday.

“By the time I realized it was my son the gun had discharged,” Smalls told police, according to court papers.

Rikers Island co-workers and union delegates showed up in court to support Smalls, who offered an eerie account to detectives of how he ended up shooting his son.

According to court papers, Smalls said he heard steps inside his home Sunday and shouted, “Who is it?”

When no one answered, and his son continued to approach in the dark, he said he shouted, “Police! Stop! Who is that?”

His son didn’t respond but approached aggressively with a hand in his pocket as if to pull out a weapon, Smalls claimed.

He shot his unarmed son “because of feeling in immediate danger,” he told police.

His lawyer noted in court that Smalls — who has worked at the Rose M. Singer Center as a meal relief officer for six years — has less than 20/20 vision.

But his son claims his dad was well aware it was him and that the two argued just before he was shot.

It boils down to, “the credibility of a 17-year-old with a record against a correction officer who has never been arrested before," Troxler said.

Quasaun has several prior arrests, including a trespassing bust just last month, according to police.

There's more to this stupid and dangerous story. When a gun is available and ready to shoot, it often is. When people are paranoid about something in their home, they might use a gun in claimed self defense or maybe it wasn't self defense? Or maybe it was intentional? Guns are dangerous. They cause a lot of problems.

And then, speaking of guns in Starbucks stores, as I have been doing, check out what happened to one of those "law abiding" gun owners recently. He shot his gun into a sink in the men's room and then promptly left the store:

Last week a man in Fort Walton, FL, walked into a Starbucks for a late afternoon caffeinated beverage, but before he ordered, what Guns.com assumes would’ve been, black coffee and apple pie with a slice of melted yellow cheese he stopped off into the bathroom, closed the door and accidentally discharged his firearm.

A Starbucks bathroom.According to the the NWF Daily News, shortly after the barista heard the loud “bang”, he said the man walked out with a “shocked look” on his face. The barista then asked the man what the loud noise was and the man said he was playing with his concealed weapon and it went off.

The man then decided he didn’t want Starbucks, so he went down the street to Five Guys Burgers and Fries, whose menu is vastly different from Starbucks’, while the barista called the police.

After an investigation, police reasoned that the man was quick drawing his handgun when it fired, shattering the sink and lodging a round into the tiled floor. It’s unknown what brand of gun the man had or if someone was talking to him, but police did say the discharged round was a .40-caliber made by Hornady. No one was hurt

Does anyone remember "take your guns to Starbucks" day? I do. So we are all safer when folks bring their guns to Starbucks? Think again. Let's take a look at one more story that should make us all feel safer. The Connecticut gun dealer who sold Nancy Lanza the guns used to massacre 20 first graders has been charged with selling a gun without a background check. From the article:

The owner of a gun shop that legally sold a rifle to the Connecticut school shooter’s mother has pleaded guilty to unrelated federal firearms violations.

The charges were not related to Nancy Lanza’s purchase. The Associated Press has reported that Lanza bought a Bushmaster rifle from Riverview that was used in the December shootings by her son. Adam Lanza killed his mother at their home, killed 20 first-graders and six educators at a Newtown school, then killed himself.

I know I feel safer now. Don't you? These are just a few of many stories in local media sources that escape a lot of attention. If we compiled them all into one place and broadcast what was going on, the public would be alarmed at what is going on these days with guns. We are reaching a point of necessity in changing both gun laws and the gun culture. If all the shootings and accidental discharges, along with bad apple gun dealers, aren't enough for people, then what is? We need common sense solutions to our national public health and safety crisis.
Posted by japete at 1:03 PM