Addendum to guns in public 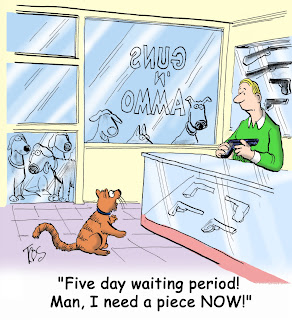 In my last post, I talked about guns in public places and mentioned the Walmart shootings blog. It turns out that quite a few shootings are happening in and around Walmart stores. Some of my readers have missed my point. When one of the nation's largest gun sellers has so many problems with supposed law abiding gun owners shooting guns in and around their stores, perhaps they should take a good look at their policies. Perhaps the idea that allowing people with gun permits to bring their guns inside while shopping in their stores is not a good one. And when you sell guns inside, some people want them badly enough to steal them. Other businesses may have to take a new look at their policies as well. I have blogged about other incidents of law abiding gun owners gone wrong in grocery stores and other places where people shop. Sure some of the folks who carry guns in and around Walmart are not law abiding. Perhaps they will cause trouble no matter what. But a good number of the shootings have been law abiding gun owners, including employees who have permits to carry shooting each other. Are they law abiding after all? Probably not considering that Walmart doesn't allow employees to carry guns on the job. Customers- come on in with your guns. Employees, not so much. Why the difference? Lawsuits if something goes wrong with a gun on the job? Dangerous? I'm just asking.

Stores that sell guns and allow customers to carry inside may have some explaining to do in the long run if things like the incident below keep happening. Cabelas in Maine sold a gun to a man who, on the day before, they refused because of his mental state at the time. Tragically he killed someone the next day with that gun. Let's take a look at the article:

"On the evening of May 1, a noticeably distraught Andrew Leighton walked into the outdoors superstore in Scarborough looking to buy a handgun. He passed the mandatory criminal background check -- he had no felony convictions or involuntary commitments for psychiatric treatment -- but he was so agitated and erratic that the staff wisely declined to make the sale.

The next day, Leighton returned for another try.

What a difference a day made: He quickly became the not-so-happy owner of a .40-caliber Baby Eagle pistol. And to keep him coming back, Cabela's threw in a free supply of hollow-point bullets.

The day after that is now carved into Maine criminal history: Leighton, lost in a mental health crisis that had been worsening for days, used his Baby Eagle and one of those free bullets to fatally shoot his 68-year-old mother, Shirley Leighton, in the back of the head.

Cabela's broke no laws -- unless you count those of common sense.

Store officials won't talk about the sale, lest it undermine the gun industry's new mantra that mental illness is not its problem.

But this much is clear: As Andrew Leighton, 46, gets a psychiatric evaluation to determine his fitness to stand trial, Cabela's has some explaining to do about arming him in the first place. (...)

"They denied him a handgun sale because of the way he was acting while looking at guns and talking to the associates," wrote one employee in an email.

And when Leighton returned the next day?

"For some reason they let him buy the gun," the employee wrote. "And they also gave him the ammo free for telling him no the night before."

Another employee, in a telephone conversation with Press Herald reporter David Hench, said "it was very well known on the gun counter, this guy was not quite right."

"We're all told to keep an eye out for things like this," the second employee said. "It's just the ball got dropped in a bad way."

In an interview Thursday from Augusta, Deputy Attorney General William Stokes said state police detectives have questioned the Cabela's employees, and the story they've told the Press Herald "is consistent with what we have."

Meaning Cabela's turned Leighton down on May 1 and, less than 24 hours later, sold him the murder weapon along with a free box of ammunition?

"That is an accurate statement," replied Stokes, declining to comment further because the investigation continues.

Robert LeBrasseur, Leighton's attorney, said he, too, has heard from Cabela's employees through back channels in recent weeks. In fact, he said, he may call one or two of them to testify if it comes to that.

"A lot of people are reaching out on this case," said LeBrasseur. "The fact that Cabela's turned him away because of his mental state only supports, in our opinion, our theory that he wasn't in his right mind at the time this offense was committed."

And what say the folks at Cabela's about their tragic about-face?

And while a visit to the store's gun department Thursday afternoon revealed no fewer than 13 sales associates crammed in behind the weapons counter, a manager politely referred any and all questions to the ever-elusive Arterburn.

That leaves Thomas Leighton, still mourning his wife's death and his son's disease, trying to fathom how Cabela's could see the obvious one day and then look right past it the next.

Andrew, he said, had been deteriorating mentally for about four weeks before the shooting.

"But that's nothing new," he said. "We had gone through this several times over the past few years, especially in the springtime, and he usually would be hospitalized. They'd tinker with his medication and two days later they'd send him home. This time it got completely out of control."

"He was in such bad shape mentally that whole week that I can't imagine why (Cabela's) would do something on Thursday that they wouldn't do on Wednesday, when his condition (on Thursday) was probably even worse," Leighton said.

A do-over for a mentally ill man desperate to buy a gun?

Only Cabela's can explain that one."

It turns out that one of my friends lost a beloved daughter to a shooting with a gun purchased at a Walmart store. Her daughter was trying to get out of her marriage. Her estranged husband bought the gun and within hours, my friend's daughter was dead. The guy was angry and losing control of his wife and his marriage. He was apparently distraught and angry enough to want to end the situation by shooting her. This happens far too often. Guns are too easy to buy and then take away to use immediately to shoot someone in a moment of rage or depression or under the influence of alcohol or drugs or other states of mind not conducive to having a gun. Guns are dangerous. There are some people who should not be able to buy them, period. If we make it harder for people to buy guns rather than easier, we will see fewer senseless gun deaths and injuries. As long as we are cavalier about the gun culture we have, thinking that selling a gun is more important than caution and saving lives, we have a problem. As long as companies and politicians fear the corporate gun lobby and kowtow to the fear and paranoia of the corporate gun lobby, we will not do the right thing for public health and safety. As a country we need to decide if the policies we have in place now are the policies that work to keep us free from the gun violence that devastates our communities. What we have now is not working so well in my opinion. The facts support what I am saying. Public opinion supports what I am saying. Common sense supports what I am saying. It's time for a change. Let's get to work.

There's been an accidental gun discharge in a K-Mart parking lot in Virginia:

A man and woman were taken to the hospital Saturday night following what police said may have been an accidental shooting in a Kmart parking lot.

At 7 p.m., police were called to the 6100 block of North Military Highway for a report of two gunshot victims. The man allegedly was cleaning his firearm when it discharged, striking him and the woman, police spokeswoman Karen Parker-Chesson wrote in an email.

Both had non-life-threatening injuries, she said.

Detectives were investigating the incident Saturday night. It was unclear why the man may have been cleaning his gun in the parking lot.

It's hard to know what to say about such stupidity and dangerous behavior. And, why, indeed, did this guy want to clean his gun in a parking lot? What was he planning? I am betting there is a bit more to this story. At any rate, it is just another example of why guns should not be in public places carried by "law abiding" citizens. I wonder if the guy was a gun permit holder?
Posted by japete at 7:36 AM