A case for working on anti-violence 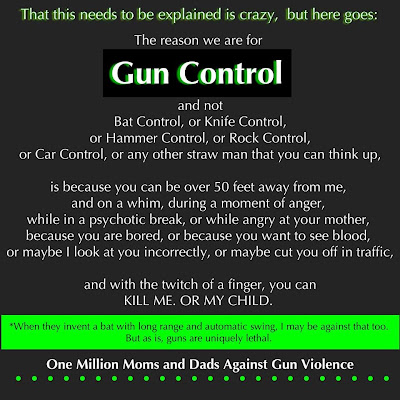 As my readers all know, I am a proponent of non-violence in general and in specific, I am a proponent of preventing and reducing the violence caused by firearms in our communities. I know I am not alone. Others blog about this stuff. This person wrote a great blog post about violence in America. When you see all the facts put into one place as this blogger did, it's pretty stunning. I suggest you take a look at all of the statistics in the linked post. They are important to understand.

Now we all know that there has been violence since humans started walking the earth. Unfortunately people find a way to kill each other (or themselves) in jealousy, in rage, over food, over stuff, over lovers, over custody of children, over a comment made, over driving in someone's lane, over money, over territory in urban areas ala gang activity, over walking around in a neighborhood while black, over losing a job, over loud noise in a car, over taking out the garbage, over mistaken identity, while depressed, after drinking too much or being on drugs, in fear, in paranoia, and just in general. People may use bats or knives or fists or whatever is available- a candlestick? But guns just make it all so much easier. It's easier to commit suicide with a gun, to kill your partner, to kill a kid taking out the garbage, to kill someone over a driving dispute, to kill a lot of kids at an elementary school, to kill a lot of people at a movie theater, to kill a bunch of co-workers at a place of business, to kill a bunch of students and professors at a college, etc. You get my point. Funny isn't it that you just don't see a lot of these kinds of killings with bats, fists, hammers, etc? And don't send me your examples of cases where people are killed by these other methods. I'm aware. We all know that guns have killed more people than these other methods combined for many years now in America. It's just common sense information.

So can we stop this violence? Can we do anything about gun violence? If we say we can't what kind of country are we anyway? We get alarmed at crib deaths, at children drowning or finding poisons or household cleaners in cupboards. What do we do? We don't let babies sleep on their tummies. We put child locks on cupboards and put covers on electrical outlets. Why? We don't want kids to get injured or die. That makes sense. What doesn't make sense is the carelessness with which we treat guns and gun deaths. How can we possibly make sense of something like this? How can we not do anything? Why are we not doing anything? Virtually every other country has done what they need to do to prevent people from killing each other with guns at least. They know even though other things are used to kill people, guns pose the most danger and are designed to kill people. Other countries don't have a second amendment. Does the second amendment give people in America license to kill? Is it "God given" as some would have us believe? Is it unfettered by any regulations or responsibilities? It gives Americans a right to own a gun for self protection in the home ala the Heller decision. But the over broad interpretation of the amendment in order to support gun rights hasn't worked out too well, right? It didn't work out too well in my family. It didn't work out too well for the 26 children and teachers massacred on 12/14. It didn't work out too well for Rep. Gabby Giffords. It didn't work out too well for the folks shot at the Aurora, Colorado theater nor for the Accent Signage shooting victims nor the victims of the Sikh temple shooting. ( I don't really have to provide links for these do I?)

It didn't work out too well for this innocent victim of a South Carolina man's perceived need to protect his daughter from harm. From the article:

Scott, 36, says he should be granted immunity from going to trial on murder charges. But others told the judge that if Scott isn’t prosecuted, South Carolina will move one step closer to becoming a free-fire zone where people shoot and kill innocent bystanders with impunity.

According to all the evidence in a pre-trial hearing on the issue, Niles was across a street and in no way threatening Scott when the teen took a .380 bullet to the head in April 2010 near Scott’s house off Beltline Boulevard near Two Notch Road. He died almost instantly.

Scott has admitted firing the shot that killed Niles, but argues he should not be prosecuted since he believed himself in danger from other people at the time he killed Niles by mistake.

The case’s final outcome could significantly broaden the state’s “Stand Your Ground” law which, when passed in 2006, expanded traditional notions of self-defense by giving people a broad right to use deadly force not just on their own property but whenever and wherever they feel threatened in a place they have a right to be, a prosecutor told Judge Maite Murphy.

If Murphy grants immunity to Scott it would be “be the first time any state in this Union” has granted immunity for killing an innocent bystander in a Stand Your Ground case, 5th Circuit Assistant Solicitor April Sampson told Murphy.

“If this law were to be applied the way (Scott) wants to apply it, he could shoot a 4-year-old playing in her front yard and still be immune from prosecution,” Sampson said.

“If you want to make it the Wild, Wild West .... (to) say you don’t have to act with care when you say you’re scared, that you can shoot someone who is not a threat to you,” Sampson told Murphy.

But Scott’s lawyer, Rutherford, urged the judge to give his client immunity.

At time of the shooting, about 1:30 a.m., Scott was in fear of his life, and he was the only one who could take action against a carload of menacing teen “women thugs” who had just followed his daughter and her girlfriends home on the night of April 17, 2010, Rutherford said.

On their way home, his daughter telephoned Scott to tell him they were being followed. He met them outside and told them to go and lie down on the kitchen floor while he went outside with a pistol.

It is unreasonable to expect that Scott is required “to go back into his house, in his castle ... and hope that the cavalry (police) are going to come ... . All that matters is that Mr. Scott felt his life was in jeopardy. We know that because everyone there felt their lives were in jeopardy,” Rutherford said.

Rutherford acknowledged that Niles was an innocent bystander, who in all probability was on the scene because he intended to help Scott’s daughter.

The real villains in this case, Rutherford said, are the carload of teens that followed Scott’s daughter and her friends home from a club. They should be charged with “felony murder,” a charge that means that they caused Niles’ death, even though Scott was the one who put the bullet in his head, Rutherford said.

When someone like Scott, in fear for his life, shoots his gun, “they cannot be expected to shoot straight always because they are not supposed to have their life in jeopardy,” Rutherford said.

Scott was fearful of a drive-by at the time he fired his gun at Niles’ 1992 Honda, and he was “faced with what he thought was an imminent threat” from Niles’ car, Rutherford said.

Murphy also heard conflicting testimony as to whether anyone fired at Scott while he was in the front yard that night. According to police, who took statements from people at the scene that night, Scott fired first.

However, Rutherford presented witnesses who said someone fired a shot at Scott before he fired.

So I'm puzzled. Was Scott's life in danger? I mean truly in danger according to the facts? He thought it was an imminent threat? His daughter and friends were safely in the house when the shooting occurred. Couldn't he have called the police and let them deal with the guys following his daughter and her friends? And he can't be expected to shoot straight because you don't have to when your life is in danger? Hmmmm. Really? So then why have a gun for self defense if you can't be expected to shoot straight when you use it in self defense? Raise your hand if this makes sense to you. When gun toting citizens start standing their ground in more and more states where the laws are in effect, can we expect to see collateral damage like in this case? Is that OK? Is this the kind of communities we want? Is this the kind of gun culture we want or need in our country? I think these are serious questions that deserve serious answers.

So what should we do? We can pass a bill to require background checks on all gun sales. We can limit who carries loaded guns in public and where they carry them. We can limit the number of rounds in an ammunition magazine. We can require gun owners to report stolen guns. We can take another look at our concealed carry and stand your ground laws. We can fund the ATF properly so they can crack down on bad apple gun dealers and deal with gun trafficking. We can provide funding for research into the causes and effects of gun violence so we can move forward with solutions.

Why are we not doing what we can to prevent gun injuries and deaths? It's simple- the influence of the corporate gun lobby on our elected leaders; the perception that doing anything to tighten gun laws will anger gun toting voters; the mistaken idea that the public is not in favor of common sense gun laws; the American gun culture which is ingrained in our overall culture and affects our views of public health and safety.

It's definitely time for a change. We can do better than we are now doing.

(Thank you to One Million Moms and Dads Against Gun Violence for their "meme" used in this post. And please, gun trolls, don't get onto their Facebook page and try to sabotage it. That is a smarmy and stupid tactic to try to intimidate gun violence prevention advocates. It is used far too often by gun rights extremists and it isn't working out too well. )
Posted by japete at 9:57 AM