"In the year since the movie theater massacre in Aurora, Colo., 23 mass killings in 19 states have taken the lives of 126 people. Six of the attacks were public killings in which many of the victims were unknown to their killers.

A USA TODAY database of these shootings over the past seven years shows that what Americans experienced over the past calendar year is sadly typical. There have been 14 such incidents since Jan. 1 of this year, while 2012 actually had a low for the reporting period: 22 mass killings. The high was 37 in 2006, the first year of the examination. (The FBI defines mass killings as murders that occur in a short time span and in which four or more people are killed.)"

And more from the article linked above:


The other 17 mass killings in the past year — most either family slayings or murders that occurred in the course of a robbery or drug transaction — occurred off the national radar. On an American Indian reservation in North Dakota in November, a man entered his neighbor's house a block away and shot dead a grandmother and three of her grandchildren, then drove 20 miles to his father's home and killed himself. A man in Schenectady, N.Y., could face the death penalty in an arson that trapped a father and his three young children on the upper floor of their home in early May.

As is often the case in the wake of these high-profile events, the nation has undergone a sort of soul-searching involving the issues of gun control, mental health treatment and the undercurrent of violence in American society.

Though the high-profile cases, particularly Newtown, stirred outrage and spawned talk of new gun policies, the legislative impact has been minimal. Indeed, the U.S. Senate voted down measures in April that would have expanded background checks on gun buyers, along with other proposals, including an assault weapons ban.

Some states, including Nevada, California and New York, have either passed or are considering gun legislation ranging from expanding background checks to banning high-capacity magazines, which is what Lanza used in Newtown.

Colorado passed common sense gun laws but it took the Sandy Hook shooting on 12/14 to really get the legislature moving to pass the laws.

While all of this was going on, the families and friends of the victims have tried to live with their grief. Their lives are forever changed. Bullets changed everything in a few minutes of senseless and violent carnage.

There will be a memorial reading of the names of the Aurora victims and the 2500 victims of gun homicides since Sandy Hook. The gun rights extremists, never known for their sensitivity or decorum, are going to be there as well just to cause trouble because that's what they do best:


Gun-rights advocates are planning a rally at the same park where a group will read the names of gun violence victims on the anniversary of the Colorado theater shootings, prompting a state lawmaker to call the move "a slap in the face." (...)

"I think it's a slap in the face of the people who are suffering the loss of a loved one," said state Rep. Rhonda Fields, a Democrat from Aurora. Fields' district includes the theater where 12 people were killed and 70 injured one year ago Saturday, and she plans to participate in the remembrance ceremony.

Fields' son was shot and killed in 2005 to keep him from testifying in a murder trial.

Dudley Brown, executive director of Rocky Mountain Gun Owners, denied his group was being insensitive and said his members would be respectful.

"Mayor Bloomberg is using this tragedy and walking all over graves to get to the microphone," Brown said.

Can't they leave victims alone? The NRA and corporate gun lobby hate it when victims are remembered. It reminds the public of all of the shootings. It just may remind the public that we haven't done anything about these mass shootings that keep happening. And if the public is reminded, they might just insist that common sense gun laws are passed so we don't have to have more of these memorial events. There is nothing political about remembering victims of mass shootings. Victims of other sorts of deaths are often remembered on a one year anniversary. It's important to those left behind to go through this process. And it's important that the victims are remembered so that we don't repeat the circumstances that cause these kinds of deaths. Of course, we all know how successful that has been over the years after remembrance events for Columbine victims, for Virginia Tech victims, for Red Lake victims, for the many other shooting victims. Thanks to the corporate gun lobby and their insistence that ANY law to stem the tide of gun violence somehow violates their rights, we keep having remembrance ceremonies. And I remind my readers of the number of commenters who have been asked to stop commenting on my blog because of their offensive and rude comments made about me and my sister and other victims of gun violence.

And, by the way, one does wonder why it's OK for the NRA to send lobbyists from the corporate office in Virginia into states that are dealing with gun legislation but not when an organization that represents victims and the majority of Americans come to memorialize victims and try to pass legislation to save lives? The NRA and other gun rights groups far outspend all gun violence prevention groups together. What is their false complaint really about? It's common knowledge that the NRA lobbyists are representing the corporate gun industry whose interest is clearly not with the victims.

Here, from this article, are the victims of the Aurora shooting:

Please say their names out loud. Be sure to look at their photos and read the brief bios of the victims. And remember that they were all innocent victims of a crazed gunman who shouldn't have had a gun and shouldn't have been able to order thousands of rounds of ammunition on-line with no background check. And we also remember the 70 people who were shot but didn't die. They, too, are victims and will always live with the horrific scene of that July 20th evening etched in their consciousness. For them, moving on is difficult. From the linked article: " The youngest injured shooting victim was three months old.[35] Ashley Moser, Veronica Moser-Sullivan's mother, was critically injured in the shooting and suffered a miscarriage a week after the attack". Ashley will suffer life long therapy and most likely counseling to deal with the carnage left by the theater shooter on July 20, 2012. We all pay for the dead and wounded.

We remember. We honor them. We want something to be done about our loose gun laws.

Below is something that Occupy the NRA shared on their Facebook page. Thanks to them for putting this together for the remembrance of the victims. 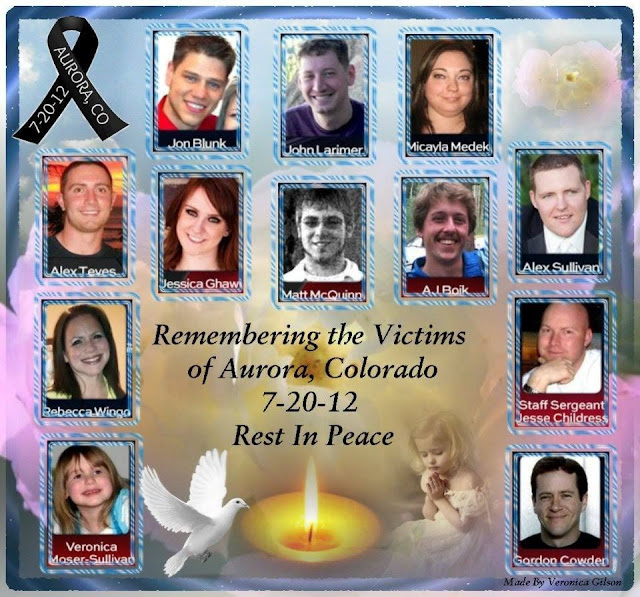 Today's Gun Report by Joe Nocera comments about the emergency medical professionals who treated the victims of the Aurora Shooting. From the blog post:

Saturday marks the one-year anniversary of the massacre at a movie theater in Aurora, Colo. That day, 58 people were sent to University of Colorado Hospital with gunshot wounds. Only one died. CBS Denver interviewed the staff that treated the victims, who suffered horrific and bloody injuries, and doctors said they’re still traumatized by the shooting.

“It’s kind of like 9/11,” said Becky Davis, a charge nurse. “We all of a sudden lost our safety.” Rob Leeret, the emergency nursing director, said events such as the Boston Marathon bombing and the Newtown massacre resurrect the trauma. “It just knocks you back a minute and you get helpless again and you go, ‘What’s the world coming to?’ And then you just have to put your chin up and remember: we have to persevere or they win.”

There is a ripple effect when gun violence happens. It spreads out far and wide and affects many people. Just read about the additional shootings reported in The Gun Report. It is remarkable that this many people die every day from bullets. It's time for that to change.