Gun trolls make up their own rules about gun laws 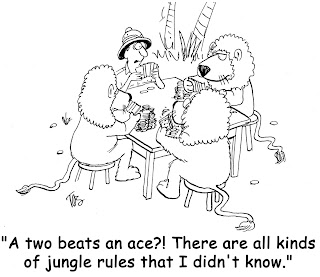 Some of my commenters send me ridiculous articles that are supposed to show me that "gun control" won't work and all of those anonymous "Brady Campaign members" are wrong. I don't publish many of those kind of comments because they make no sense and don't contribute anything to a reasonable discussion. All these guys want are to accuse me of nefarious motives and impugn my character for even mentioning gun violence prevention. That, of course, is what this blog is all about. Never mind. They think I will change my mind based on their comments or irrelevant articles. Whatever. They must be under the belief that absolutely nothing can be done about all of the daily carnage in America. In fact, if anything gets done about this public safety problem, it will apparently be the end of the world as they know it.

I mean, after all, if there is a background check on every gun sale, surely that will lead to the government coming for their guns and their rights. How that illogical line of thinking makes any sense is beyond me. But logic is not the strong suit of some of these blog trolls, nor that of the corporate gun lobby that helps to fuel the fear and paranoia exhibited by gun rights extremists all over America. Never mind that these folks represent 10% of us at most. They want to make up their own rules about guns and gun use. They have been doing this for so long now that they have convinced a lot of people to believe them. But listening to their arguments is old and tired and irrelevant after 12/14. The America we know is changing, thank goodness. We have come a long ways in our thinking since the "Founding Fathers" were around thinking about this very stuff. That was 200 years ago. Good grief.

First, is this opinion piece written by a retired ATF agent about why background checks be universal and why the bill must pass.  In it he says this:

But we can do so much better. Background checks work. Many felons have been prevented from buying guns. Criminals brag that they can buy guns on the street–and yes, it happens, but not without obstacles. And those obstacles are what allow police and ATF agents to apprehend them and stop the next murder. A criminal in a back alley may in fact be making a deal with an informant or an undercover agent.

The background check bill should pass and it should be coupled with a strong gun trafficking law and beefed up resources for police and ATF. Senator Joe Manchin has shown real leadership and insight on all of this. He was like the guy who would call and ask what he could do to make sure his gun sale was done correctly.

Leaders who either reach too far, or want it all their way, will fail. The background check bill is a compromise bill, but for some there is no compromise. I would suggest they reassess their position in light of the facts and not lobbyist talking points. One of the educators at Newtown after the tragedy referred to a Scripture quotation: A little child shall lead them. Many children, many people are leading, marching, walking, and speaking. The leaders in Congress in both parties need to walk with them.

Of course the bill is a compromise. There won't even be universal background checks if this bill becomes law. This is a compromise to appease the gun rights community. But even that didn't work. Even that was not acceptable. Compromise is simply not an option for this crowd.They want their own rules and some of them don't follow the rules already in place ( or enforce the laws already on the books, as they say) Instead, this crowd is made up of people like the Gilberton, PA "police chief" about whom I wrote in a previous post. A new blog post by my friend Baldr Odinson at New Trajectory unpacks the story about this uncompromising supposed police officer. Thanks to my friend, we have learned some new things about this "law abiding gun owner." From the blog:

Let's summarize, shall we?  Mark Kessler, who apparently isn't accredited as a police officer, has endorsed violence and insurrection against our government and its leaders, used vociferous profanity and violence publicly, has engaged in and recruited for an illegal paramilitary militia, been involved in a scandal wherein he falsely arrested a councilman and had him strip-searched, and was even involved in a bar shooting wherein he shot himself and "lost" his gun, yet is still allowed to keep his job!

The mayor and city of Gilberton, Pennsylvania, should really reconsider who it is that is protecting their hamlet.  If they're concerned about their town's image, or worried about crazy people harming their citizens, they need to look no further than their own police chief to get alarmed and feel threatened.

Yup. These are the folks who oppose universal background checks and/or any other common sense law to stop people who shouldn't have guns from getting them anyway. Great. This town and its' Mayor have a lot of soul searching to do. Raise your hand if you think you would want this guy protecting you and your family. Will the town folks continue to support a crazy man who is seemingly not even an accredited police officer to be the one and only law enforcement officer protecting their small town? Or will they do the right thing and ask him to resign? He is a dangerous man. The total insanity and hypocrisy of someone like Kessler being allowed to serve represents the American gun culture at its' worst. He is an insurrectionist and not law abiding. At this point, one wonders why he is able to even own guns considering his dangerous behavior with guns.

Should we go backwards to a time when we didn't do any background checks for gun sales? Should we have no gun laws at all? Or should we just have the gun laws the extremists like that allow them and others ( many of whom shouldn't be able to own or carry guns in the first place) to carry loaded guns anywhere they go? As Jim Cavanaugh, the ATF agent who wrote the linked opinion piece above says:

The Gun Control Act of 1968, swept into law by the assassinations of the 1960’s, strengthened gun laws, and the Brady Handgun Violence Protection Act of 1993, passed after the attempted assassination of President Reagan, did mandate background checks. These two laws have prevented uncountable murders and violent crimes. Without them, American life would be drastically different–and worse. I used to say to the Special Agents and detectives assigned to my division, “That gun trafficking ring you broke up was about to be a series of murders.” Or, “That armed felon you just arrested was a murder looking to happen.”

Even as we grieve for the victims of Aurora and Newtown, or lose promising young lives in Chicago and Indianapolis, Philadelphia and Los Angeles, America is enjoying an overall decrease in firearms violence. Many factors are involved, but an important one is the vigorous enforcement of firearms laws. That effort has spanned presidential administrations and has put trigger-pullers and predators in prison for long sentences. If you’re in a cell block, you’re not out with your piece, preying on your neighborhood.

That’s why I say that gun safety laws are not gun control–they are crime control.

If the gun extremists are right about making sure "bad guys" don't get guns in the first place, they should be lining up to support Senator Manchin's bill. But, shamefully, many of them are not. I guess they like the idea that criminals can still get their guns because it feeds right into their fear and paranoia that there are so many criminals with guns out there that they, too, must be armed to the gills to protect themselves from those criminals. I mean, if there are more criminals with guns, they have what they think is an argument for themselves having guns. This is the America we have right now. I wrote about America on gun steroids in my last post.

We are better than this and we have lots of work to do to get this right. What we can't do is let folks like the gun trolls on my blog, who represent a small subset of Americans, and "Officer" Kessler, determine gun policy. Making up their own rules leads to a less safe America. Lives depend on us passing a universal background check bill and other common sense measures that will save lives. It's time for a change. Let's get to work.
Posted by japete at 12:39 PM