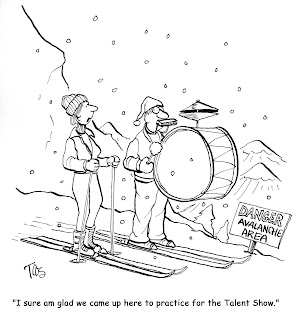 How can things be more ridiculous? I wrote in a previous post about the nonsensical but also stupid and dangerous ideas espoused by gun rights activist and libertarian Adam Kokesh. This dangerous proponent for gun rights has now been arrested for possession of drugs and other charges:

"Police searched the Northern Virginia home of activist Adam Kokesh Tuesday evening and took him into custody on for allegedly being in possession of hallucinogenic mushroom while also having a gun, authorities said.

(A video posted on YouTube that appears to show activist Adam Kokesh loading a shotgun in Freedom Plaza.) (...)

Kokesh refused to be fingerprinted or arraigned, or to speak with court officials on Wednesday morning, said Nancy Lake, Clerk of the Fairfax County General District Court.

He is now scheduled to be arraigned on Thursday morning. A preliminary hearing was scheduled for Oct. 2.

Expecting the government to raid our house? What's that all about? Was this a direct challenge to the government? Did this supposed "law abiding" gun owner and gun rights activist purposely violate the law to see what the government would do so he could claim that the government was taking away his rights? What kind of thinking is this? More from the above linked article:


U.S. Park Police Lt. Pamela Smith said her agency executed a search warrant at Kokesh’s home in Herndon about 7:45 p.m. Tuesday, looking for a weapon. The park police are the federal agency responsible for policing Freedom Plaza, the concrete park a few blocks from the White House where — in a video posted to YouTube on July 4 — Kokesh appears to load a shotgun in violation of D.C. gun laws.

Smith said she did not know if the YouTube video was the reason for the search warrant. Carrying a loaded weapon, concealed or unconcealed, is against the law in the District. The possession of a firearm not registered in the District carries a penalty up to a year in prison.

“We will not be silent. We will not obey,” Kokesh says in the video. “We will not allow our government to destroy our humanity. We are the final American Revolution. See you next Independence Day.”

According to a news release posted on Kokesh’s Web site, police in cars and helicopters approached Kokesh’s house in Herndon, a suburb 25 miles west of Washington, about 7:45 p.m. Tuesday and staged an “armed invasion.” The house is in the 1500 block of Snow Flake Court.

So from Kokesh's provocative statements about the "final American Revolution", law enforcement had pretty good reason to believe that Kokesh was ready to act on his words. Such stupid, ridiculous and dangerous rhetoric should not be acceptable given Kokesh's past antics. And doesn't Kokesh, who seems to know so much about everything else, know the rules about gun possession/carrying and the use of drugs? I thought people who got permits to carry guns in public are trained not only to use those guns properly and safely but also to understand the state rules about carrying while on drugs or consuming alcohol. Permit holders don't always follow the rules as we have seen way too many times.

Further, just read the latest Gun Report written by New York Times columnist Joe Nocera for evidence of the carnage that is tolerated in our communities because we have abdicated public health and safety concerning guns to the corporate gun lobby and their influence on our elected leaders. It's mind boggling to read this report written several times weekly. Nocera is just reporting on what's actually going on in America to call attention to a serious problem that we are ignoring. Passing common sense laws, supported by the majority of us ( even gun owners and NRA members) to prevent even some of this carnage is abhorrent to some of the gun rights folks. Their beliefs that these laws were enacted to take away their rights ( about which they are wrong) have prompted recall efforts for Colorado legislators and lawsuits in Connecticut. From the first linked article:

“I have never embraced the idea that we should have recalls,” said Dick Wadhams, a Colorado-based Republican political consultant. “We have elections for everything short of political corruption or some sort of malfeasance.”

Democratic Party Chair Rick Palacio agreed that recalls should be used as a weapon against criminal politicians and little else, saying, “What we’re looking at right now are two instances of an abuse of the recall process — people attempting to bring legislators to a special vote because they have policy differences. That should be solved at the polling booth during the election cycle, not in expensive recall elections.”

In Connecticut, the National Shooting Sports Foundation, located in Newtown where we all know that 20 first graders were massacred last December, has joined the lawsuit. I wonder why? Interestingly enough, here is a statement from the "safety " section of the NSSF webpage:

As the leading organization to promote firearm safety, the National Shooting Sports Foundation (NSSF) launched Project ChildSafe in 2003 specifically to educate gun owners on their responsibility to keep their guns out of the wrong hands, and provide the tools to help them do so. Through partnerships with law enforcement we have distributed more than 36 million free firearm safety kits and safety information to gun owners throughout the U.S. as part of this program, and between 2000 and 2010, fatal firearm accidents dropped 22 percent. Firearms accidents are now less than 1 percent of all fatal accidents in the United States.

Our efforts have made considerable strides in gun safety, prevented accidents and saved lives, and working together with you, we can do even more. As responsible firearm owners, we must all take steps to prevent firearm accidents, theft and misuse. Firearm accidents and misuse and the tragic consequences they have on families and whole communities should compel all of us to work even harder to practice and promote firearm safety.

The hypocrisy here is stunning. If the NSSF actually believes in their own words, why would they be against laws to keep everyone, including gun owners, safe from gun deaths and injuries? If they believe in saving lives, how could they be against laws that could prevent people like Adam Lanza from getting a gun and shooting up a bunch of first graders? This, dear readers, is ridiculous. And it's about the rights of all of us to be safe in our communities. For the sake of the common sense and the common good, we have to hope that these recall efforts and lawsuits fail. They are ridiculous, frivolous and wrong headed.

And just to throw in one more reason why gun rights advocates who promote loaded guns everywhere and fight against reasonable gun laws should not get to make the rules concerning gun laws, check out this article about a concealed carry gun permit holder:


A man carrying a concealed handgun, with a conceal carry license, was in the parking lot of a Walmart store in State College, Pennsylvania, when the gun fell out of its holster.  When he tried to pick it up, he unintentionally discharged it, striking himself in the hand. (...)

He's lucky no one was killed -- this time.  With no charges, there's nothing to stop it from happening again.

Remember, Walmart supports conceal carry in its stores.  This is at least the 9th time someone with a legally concealed handgun has unintentionally or purposely shot themselves or others at Walmart stores in 2012 or 2013.

Why is it that our legislators have been deceived into passing laws that allow people to carry guns into public places, potentially endangering all of us? The Pennsylvania "law abiding" gun owner was careless and irresponsible with his gun just as Adam Kokesh's antics are irresponsible. When people like this are entrusted with loaded guns in public, we are asking for problems. Guns are dangerous. Yes, accidents happen but when they happen around loaded guns things can go terribly wrong. And when state legislators, elected in democratic elections, pass laws to make us all safer, why do gun rights advocates want to make end runs around the process? Why all the lawsuits? Remember that the gun industry has immunity from lawsuits, thanks to the corporate gun lobby. They don't like lawsuits when it's against them but they love lawsuits when it suits their purpose. Enough is enough. It's time to get to work to strengthen our gun laws and work to make us all safer.